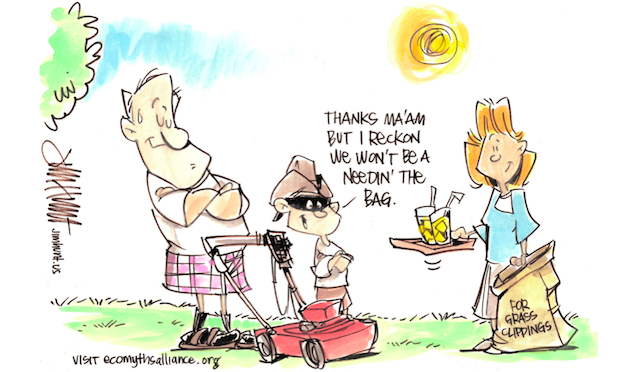 The Lawn Ranger: What Happens When You Leave Grass Clippings on the Lawn?

It’s time for a showdown…between law-abiding homeowners and the grass clippings running rampant on their lawns. Could these outlaws be contributing to the dastardly thatch threatening to destroy their turf? Find out in this action-packed installment of EcoMyths.

First, let’s tip our hats to today’s info-wielding heroes: Professor Peter Landschoot, PhD, who directs Penn State’s Center for Turfgrass Science, and Aaron Patton, PhD, a professor of agronomy at Purdue University and Purdue Turf Tips blogger. Short story is, both are shooting straight from the hip when they urge us to let grass clippings lie.

Lifting the Mask on Thatch

For those lawn-owning folks lucky enough to have never heard of thatch, here’s a quick primer. In addition to being a cheeky nickname for a certain former British prime minister, thatch is an intermingled layer between the turf surface and the soil beneath that’s made up of stems, root material, and other slow-to-decompose plant parts. It can affect turfgrass virtually anywhere.

A little thatch can actually be good, say Landschoot and Patton, because it acts like mulch, holding water and microbes in the soil and providing cushion for turf. In fact, Kentucky bluegrass, which is more prone to thatch than some other grass species, is often used on football fields thanks to its injury-reducing sponginess.

But a host of problems can creep up when thatch takes over. More than an inch of thatch will restrict the movement of water to the roots. Once the layer hits two inches, warns Landschoot, roughly half of the lawn’s roots are growing in the thatch and can be choked off from water if the thatch dries out, leading to desiccation (bio speak for extreme dryness). Thick thatch can also create a veritable hotbed for insect overpopulation and lawn disease. And, if thatch is so spongy that the mower wheels sink down into it, you can find yourself inadvertently hacking off most of your leaf material.

It’s also just plain exhausting to remove thatch; you need a special machine to slice it vertically, then you have to rake and dispose of it. “All that,” sighs Landschoot, “is why people get all bent out of shape about thatch.”

The thing is, contrary to the long-held myth, grass clippings are not part of the potential problem.

True, the laws of gravity are hard/pointless to argue. When you mow and let clippings fall into the turf, they may very well wind up down in the thatch. But Landschoot and Patton say most turfgrass scientists don’t consider the clippings to be part of the thatch, since they are short-lived and break down rapidly.

Here’s the reason, straight from your grade school biology textbook. Because they are basically leaf material, grass clippings are mostly water (we’re talking 80-90 percent of their composition). Once said clippings dry out, very little biomass remains—and what does remain is so high in nitrogen that microorganisms will feed on that first. And why wouldn’t they? Grass clippings are easier to eat than thatch, since thatch consists of roots and stems, which are full of fibrous lignin.

To sum it up, if you trash clippings to prevent thatch, as Landschoot points out “you’re doing a lot of work for nothing.” And…you’re missing the pretty great benefits found in letting those clippings lie.

Not only does leaving grass clippings where they fall not contribute to thatch, but there are also several benefits to letting them be. (Cue inspirational theme song.)

Grass clippings are beneficial to both soil and turf, enthuses Patton. Because they can be easily broken down by soil microbes, clippings return important nutrients back to the plant, and contribute to soil health by providing a nutrient source for the microbes themselves. In laymen’s terms: You can spend less money buying fertilizer. Landschoot says his team’s rule of thumb is to cut fertilizer by as much as a third just by returning grass clippings to lawn. In other words: #tremendoussavings, #saynotooverfertilizing, #lawnmaster.

But a few self-righteous (and accurate) hashtags aren’t the only reason Patton says “leaving grass clippings on your lawn is a good thing.” It also keeps a lot of unnecessary bulk out of landfills—a large part of why states and municipalities across the country have banned grass clippings from trash pickup. According to the EPA’s Municipal Solid Waste page, yard waste comprised 13.4 percent of the waste stream in 2010.

Perhaps the greatest win, though, is that leaving grass clippings saves another precious commodity: time. The EPA Greenscape program page estimates that leaving clippings where they lie by using modern mowers can reduce mowing time by 30-40 percent.

How to Remain the Lawn Hero You Are

Concerned that leaving the clippings will damage your rep as the best lawn-keeper on the block? Both experts we talked with suggested ways to keep your image intact. It’s basically all about committing to your schedule and your mower.

Clumps may be more likely during periods of tremendously fast growth, but regular mowing will help keep the peace. Mow frequently—once a week when grass is growing fast—and keep the mower at a reasonable height of cut—between two to three inches in height depending on the grass species. If you do miss a mowing and have an uncomfortably high clump to no-clump ratio, then just go back over the yard with the mower to break up big clumps. Both experts recommend a mulching or recycling mower, which breaks up the clippings into finer particles so clumping is less likely.

Leaving grass clippings on the lawn does not damage your lawn by contributing to thatch. In fact, there are some pretty great benefits to leaving clippings where they lie, including soil enrichment, nutrient return, and time and money savings.

Probably the easiest eco-friendly action ever: Just leave those clippings where they fall and reap the many rewards.