Trash Talk: Are Sink Disposals Good for the Environment?

OMG hold your nose! There’s a mystery substance at the back of the fridge, and it’s scaring all the other food with its excessive stink. Now what? Pitching the moldy glob straight into the sink disposal means it can basically disappear from your life instantly, i.e., not exponentially increase the gross factor in your trashcan days before garbage pickup. But that’s not the only thing in-sink disposals have going for ’em. On top of the sheer convenience of it all, the rumors are true—garbage disposals are generally a greener option than trashcans. 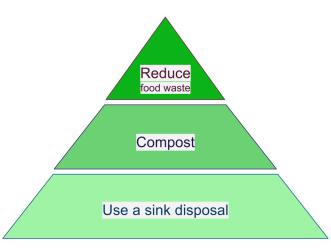 These appliances, which have been heralded as the “next great tool for urban sustainability,” not only reduce the amount of diesel fuel and emissions associated with driving garbage trucks around town—but also carry this uneaten waste along to the wastewater treatment plant, where it can actually be used to produce resources like fertilizer and clean energy.

But let’s not get ahead of ourselves here. Though sink disposals do have some clear benefits over trashcans, they are not the greenest way to dispose of your uneaten food, according to life cycle analysis expert Eric Masanet, PhD, of Northwestern University, and Debra Shore, commissioner of the Metropolitan Water Reclamation District of Greater Chicago.

Based on a variety of research and their own professional experience, both Masanet and Shore agree that the hierarchy of green ways to dispose of food goes like this, from least green to most:

Getting Down and Dirty With Disposal Science

In determining whether one thing is greener than another, Masanet reminds us that it’s not just energy and water usage or greenhouse gas emissions we must consider, but all of them together and more. So, as we embark on this mini garbage disposal life cycle analysis, we’ll do our best to keep it fun (but, in all honesty, it may not be as entertaining as these laugh-out-loud ridic cat GIFs—you’re welcome).

So, what exactly is green about disposals? Plenty. At the most basic level, they simply help lighten the load for emissions-spewing garbage trucks. The most intriguing of their eco-perks, however, is that disposals have some major hidden value.

Most wastewater facilities skim out food scraps and return these nutrient-rich biosolids to soil as fertilizer for agriculture production and public parks—like the much buzzed-about Maggie Daley Park in Chicago.

Moreover, as Shore explains, when we send food scraps down the sink and to wastewater treatment plants like the ones in Cook County, Ill., it is broken down by bacteria in a process called anaerobic digestion, which allows us to capture the methane generated by decomposition of organic matter. Sorta like in this simple (we wish!) flow chart from the EPA… 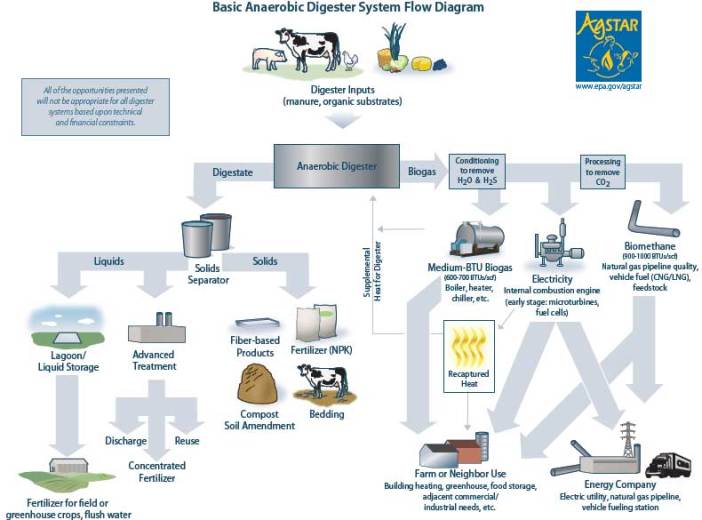 So—rather than those greenhouse gases (GHGs) being released into the already overtaxed atmosphere, they are instead converted to electricity or biofuel, aka, clean energy. This is a big deal, considering that a Journal of Cleaner Production article found that the global waste sector is responsible for 3 percent of GHGs.

Meanwhile, in landfills, the same decomposition is occurring, but on a larger scale and generally without as efficient a system for energy recovery. “Sending food waste to a landfill isn’t all bad if the landfill has methane recovery, which is a growing trend,” explains Masanet. For example, he mentions that Apple uses landfill gas to power some of its data centers. But landfill gas recovery is simply not as efficient as recovering gas from food scraps in wastewater, because wastewater treatment systems are working with much more concentrated food waste than landfills.

Sound like a pipe dream to turn ground-up food waste into clean energy? Shore assures us it’s not, directing our attention to the East Bay Municipal Utility District in Oakland, Calif., which seven years ago became the first wastewater treatment plant in the nation to convert post-consumer food scraps to energy via anaerobic digestion. And, she adds, Chicago’s Metropolitan Water Reclamation District now captures and uses between 50-80 percent of the methane generated at its treatment plants.

Even if you don’t live in Chicago or Oakland, anaerobic digester systems are becoming more common in bigger cities. The EPA is all over this potential, and estimates that if just half of the food waste generated each year in the U.S. were to go through a anaerobic digester process to collect the methane from it, we would generate enough electricity to power over 2.5 million homes for a year.

But wait! Sink disposals are not without their impact, too, from the water and electricity needed to grind food scraps down the pipes, to the material needed to build these contraptions. They may also slightly contribute to nutrient overload in waterways—which, as everyone around Lake Erie recently learned the hard way, can pollute the heck out of our drinking water supply. This study in the Journal of Cleaner Production found that sink disposals were responsible for about 2.1 percent of nutrient overload in the water—a much higher percentage than landfill trash and composting—but relatively quite minor compared with nonpoint source pollution, aka runoff from farms and fertilizer-spiked stormwater.

But…we still haven’t tackled the heart of the problem. “If you’ve got food waste, composting is typically best,” comments Masanet. “But even better is to not generate the food waste in the first place!

Leaving No Leftover Behind

The real problem is not how we deal with trashed food, but that we waste so much in the first place. Globally, we waste about a third of our food supply, according to 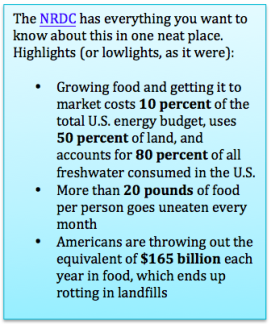 a report for the Food and Agriculture Organization of the United Nations. In the U.S. that number is closer to 40 percent of food, which represents more than a 50 percent increase in domestic food waste since 1974.

Yes, people are going hungry and we’re wasting money, energy, and water on food we don’t eat. According to this 2009 study, we’re using a quarter of our nation’s freshwater consumption and roughly 300 million barrels of oil per year to grow food no one ever eats.

How did we get to this point? Masanet thinks a lot of it has to do with our day-to-day shopping habits—we buy too much, don’t plan properly, get confused by sell-by dates, and often let what we’ve bought go bad. The good news is that there are some easy fixes for it.

Tossing food waste down the disposal is generally greener than trashing it for a variety of reasons, one primary reason being that it more efficiently converts food waste into energy.

But, the sink disposal process still requires resources like water and energy to function, and can sometimes contribute to nutrient overload in our waterways. That’s why the greenest way to dispose of food waste is to compost—and the greenest thing to do overall is to reduce food waste in the first place.

Do One Green Thing 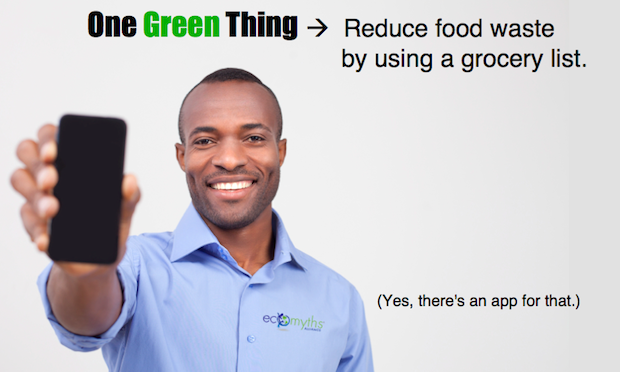 Reduce food waste by making a grocery list. (Yes, there’s an app for that!) or just use Google Keep (where you can readily share shopping lists amongst family members.

Also…Reduce your own food waste: