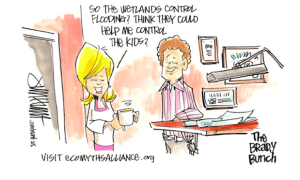 Here’s the story, of a roomy basement…that was overflowing thanks to recent storms…Some people blamed wetlands for this hardship, but they were not at fault…

For many, the lure of suburban living is more than just the promise of big houses and bigger yards—it’s also the idea that there may be more access to natural space than in cities.

When that nearby natural area is a wetland, you get a scenic community of marsh, swamp, wet prairie, and/or sedge meadow to enjoy, plus a front-row seat to an intricate ecosystem at work—purifying and collecting water, removing pollutants, and providing a sanctuary for birds, frogs, dragonflies, turtles, and all kinds of cute little critters.

But after last spring’s massive storms waterlogged basements throughout the Midwest, these important ecosystems took some heat. EPA and municipal hotlines were flooded with calls from angry homeowners calling wetlands the badlands, and blaming the damage on their proximity to their homes. The calls keep coming, says Gary Sullivan, PhD, senior restoration ecologist for the Wetlands Initiative. Residents across the region are asking the Chicago-based nonprofit: “If there are wetlands near me, will my house flood when it rains?”

The answer is a resounding no, say Sullivan and his colleagues. “It’s ironic that so many people think that they’re at risk for more flooding because they live near wetlands. But the opposite can actually be true.” How’s that, you wonder? Glad you asked…

Much More Than a Hunch That Wetlands Matter

Rather than condemn area wetlands for simply being, well, wet, our experts confirm that there’s plenty of reason to celebrate them.

Flood-beleaguered homeowners can take heart knowing that one acre of a typical wetland can store a million gallons of water, according to this EPA PDF. As Sullivan explains, this is because wetlands act as a sponge-like basin, holding water when it rains, then releasing it slowly—thereby reducing the amount of water feeding the flood. (Not convinced? Picture the opposite type of surface, he suggests—hard, impermeable concrete certainly contributes more than its fair share to fast flooding.)

Restoring wetlands can help municipalities save money in drinking water treatment, too, because wetlands help rid the pollutants. It can also reduce homeowner costs for flood insurance. And all of this is just the straight-up impact on our very own species.

Wetlands also provide critical habitat for plants and animals, including the one third of federally listed species protected by the Endangered Species Act, according to this Defenders of Wildlife Wetlands fact sheet. Consider, too, the EPA statement that up to one-half of North American bird species nest or feed in wetlands.

Now, for a little context…

Let’s take a quick rewind back to 1673, when explorers Louis Joliet and Father Jacques Marquette first journeyed along the Illinois River. The land was lush with vegetation boasted an abundance of lakes, streams, rivers, and marshes.

Since those fur-hat-wearing days of yore, almost all Illinois wetlands have been drained for agriculture or urban development—to the tune of 90 percent, according to the Illinois Department of Natural Resources. To make matters worse, much of what is left is fragmented, degraded, and often not in very good shape.

So where did all the water go? The ultimate answer, according to Sullivan, is simply downstream—as opposed to being absorbed by our landscape to enter the water table, the atmosphere, or slowly released to streams.

Over the past 100 years and more, farmers have installed drain tiles and dug drainage ditches to quickly and efficiently move the water off of their fields.

Soon, the Illinois landscape—once peppered with depressions and other wetlands that retained water—was dry land to host fields of crops, specifically corn and soybean. Cities and residential developments covered their surfaces and built elaborate drainage systems to efficiently move water off the landscape into streams or other drainages. Many of the wetlands that were left were soon scooped up by developers, he explains.

Loss of wetlands is not just a giant blip in the regional radar, either, points out Mark Maffei, PhD, a wildlife biologist who used to work for the U.S. Fish & Wildlife Service and National Park Service in Florida, and who currently sits on the boards of both the Natural Land Institute and the Wetlands Initiative. In his work on behalf of the Everglades, Maffei worked to protect the ecosystem in southern Florida and repair the damage from the loss of wetlands. Towns like Boca Raton and Fort Lauderdale along the southeast coast, both of which were constructed largely in drained wetlands, are in a constant threat of flooding due to inadequate flood control infrastructure.

Both experts point out that nationally the pace of destruction is most extreme in Louisana’s coastal wetlands, which help protect New Orleans from hurricane flooding.

Florida’s Everglades, considered one of the most extensive and amazing wetlands in the world, have also been hard hit. Though it once touted two million acres of wetlands, he adds, the Everglades has only half its wetlands remaining. Without the Everglades, which extend from Lake Okeechobee in the north to the Florida Bay in the south, much of South Florida would lack drinking water, says Maffei.

The statewide loss of 9.3 million acres of wetlands—46 percent of its original 20 million—is contributing to the entire state’s freshwater crisis, he explains. That’s because without the once-much-larger wetlands around to recharge the aquifier (the underground layer of porous rock that contains groundwater) excess saltwater is pushing into the coastal water supply system.

Indeed, the loss of wetlands is endangering water resources across the country, confirm Maffei and Sullivan. Coupled with the vast amounts of water consumed for drinking or industrial purposes, the lack of wetlands available to recharge groundwater has made water levels in aquifers low nationwide—critically low in some cases.

In other words…we have been and continue to lose wetlands at a staggering rate around the country, and that is definitely a problem.

A Bunch of Important Efforts in Progress

The good news is that across the country there are some significant wetland mitigation projects underway in areas, like the Everglades, where scientists and engineers have created or restored wetlands to lessen the impact of deliberate wetland loss.

Case in point: In Illinois, the Wetlands Initiative has embarked on an aggressive project with the DuPage County forest preserves to restore the stream corridor along two miles of the degraded lower Springbrook system bisecting the St. James Farm and Blackwell forest preserves.

Ultimately, the restoration of wetlands is vital, in large part to help prevent flooding, but also because they help keep the environmental peace. Wetlands, according to Sullivan, are invaluable in terms of improving water quality, reducing flood damage, contributing to groundwater and surface water recharge, and supporting habitat for fish and wildlife. All that and they’re pretty places to wander, learn, and play…Welcome to your new love affair with one wild and wonderful ecosystem.

Living near a wetland does not increase your home’s risk at flooding—in fact, because wetlands function as natural sponges that trap and slowly release surface water, rain, snowmelt, groundwater, and flood waters, they actually help control flooding.

Support organizations working to restore wetlands, like the Wetlands Initiative and the National Wildlife Federation.