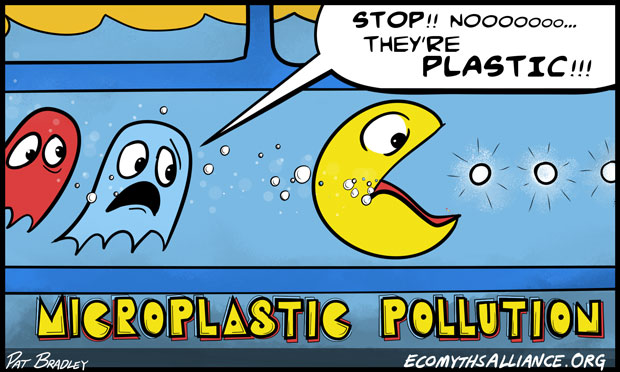 Is Smaller Better When It Comes to Plastic Pollution?

Small plastic pollution is no game! Teeny weeny plastics are polluting even the cleanest-looking waters—and unsuspecting aquatic wildlife are accidentally gobbling them up. Question is, if the plastic is so tiny you can’t actually see it, does it really matter?

In a word—yes. Though the research is still a work in progress, there is already clear evidence that microplastics are having a serious impact on ecosystems in our oceans and inland waters alike.

To learn how and why size matters in plastic pollution—and what you can do about it—we trawled the minds of Alliance for the Great Lakes’ research manager Olga Lyandres, PhD, and the Ocean Conservancy’s Sarah Kollar and Allison Schutes, who manage the Trash Free Seas program.

Why these pros in particular? The Alliance partners with the Ocean Conservancy and coordinates the International Coastal Cleanup days in Illinois, Wisconsin, Michigan, Minnesota, and Indiana—so together they represent quite the dynamic duo in clean water issues.

Packing Up the Facts: Plastic Pollution by the Numbers

“Plastic is by far the most abundant of the trash in our oceans,” says Kollar. In fact, it comprises more than 90 percent of the trash picked up in the annual international cleanup.

Of course, even the most impressive pick-up efforts can’t get it all. According to 5 Gyres, a research organization that sails the stormy seas (and lakes) to study plastic pollution, the world’s five oceans are filled with roughly 295,000 tons of plastic pollution. (Perspective check: That’s the equivalent of 2,360 blue whales, aka a quarter of the population of the largest animal living on the earth.)

And it’s not just an oceans issue. Plastic pollution is a growing concern in the Great Lakes, where a joint research effort spearheaded by 5 Gyres and SUNY-Fredonia has recently found what Lyandres sums up as “high concentrations” of microplastics throughout the Great Lakes.

What’s So Big About Small Plastic?

Microplastics are pieces of debris that are smaller than 5 millimeters (er, just under a fifth of an inch), says Lyandres, who describes the following main categories:

⇒ Pellets: Tiny plastic particles designed to be round. Biggies in this category include resin pellets, which are used to make everything from Styrofoam to candy wrappers, and microbeads, the mini-scrubbers found in personal care products like toothpaste and face scrub (for more on that, read this month’s mini-myth.)

⇒ Film: Thin, long plastic pieces that may once have been food wrapping or plastic bags (a frustratingly large modern problem, considering that plastic bags didn’t even make their grocery store debut until 1977).

Together, all these seemingly miniscule particles add up to a big headache. For starters, they’re basically everywhere.

Instead of floating to the water surface where we could potentially skim them off, Kollar and Schutes say microplastics are showing up throughout the water column, from top to bottom.

Where is all this plastic coming from? Some has origins in the ocean, like from fishing nets or giant cargo containers that fall off ships (e.g. 28,000 rubber ducks, whoops!). But, Schutes says, the largest growth in debris actually comes from land-based waste that makes its way to our waterways.

So Small a Particle—So Easy for Marine Animals to Consume

So we’ve established that, like love, microplastic trash is all around. But what’s the big deal if they’re too small to choke a _____ (fill-in-the-blank with the adorable marine animal of your choice)?

It’s complicated. “Before you can say definitively what the impacts are, you have to be able to provide evidence that fish do indeed consume them,” begins Lyandres. She points to Sherri Mason’s lab at SUNY Fredonia, where researchers have found plastic in the guts and intestines of 18 different species, including 17 fish, and one waterbird.

The amount of plastic ingested varies, but “they all consume microplastics, in some cases because it looks like food, in other cases because it gets into their systems just because it’s there [in the water],” explains Lyandres.

In fact, their very size is part of why so many species do ingest them—animals that skim the surface of the water or sediment will eat it unintentionally, while others will actively pursue it because its size closely resembles plankton or fish eggs.

Why worry about a few mistaken chomps of the non-organic stuff? Eating plastic, Kollar points out, can result in serious digestive issues. Albatross chicks, for instance, cannot regurgitate nor digest plastic debris they swallow, so it can literally fill up their stomachs to the point they can no longer digest food.

It’s not just that wildlife may eat things they clearly should not, says Lyandres. Microplastics are a double threat because in addition to the chemical contaminants inherent in plastic manufacturing, they also serve as a vessel for other chemical contaminants to proliferate, confirm Kollar, Schutes, and Lyandres.

“Plastics can act like sponges in the ocean, so small resin pellets, microbeads, and other smaller plastics actually adsorb toxins in the surrounding seawater,” explains Kollar. (Adsorb, for those of you who’ve forgotten your high school science lingo, basically means that molecules stick onto the surface.) “When you have a little piece of plastic adsorbing other pollutants, and then a small animal eats it, the ecological risk increases.”

Several of the chemicals used in plastic manufacturing or that stick to microplastics in water (including styrene and BPA) have been linked to endocrine-disrupting effects. And research shows that marine mammals, sea turtles, seabirds, and invertebrates alike have indeed ingested plastic debris that contains these hormone-confusing chems.

There’s also emerging evidence linking microplastic ingestion with impaired bodily functions among animals. A 2013 study of lugworms indicates that ingesting microplastic can transfer pollutants to their tissues at concentrations high enough to diminish the animal’s ability to remove harmful bacteria from sand, and even experience increased mortality rates.

These plastics don’t just die with one animal, either—it can start a whole vicious cycle of microplastics being transferring up the food chain, according to recent research on a mussel-eating crab.

The longevity of the type of plastic also impacts its toxicity. Several studies indicate that the more time the plastic floats around, the more pollutants it absorbs. For example, one study of California rivers found that small degraded microplastics carry higher concentrations of certain priority pollutants than virgin plastic.

Plus, Lyandres points out that because microplastics have a higher surface area to volume ratio compared to bigger plastic debris, toxins can become highly concentrated.

Will these microplastics work their way up the food chain to humans? As Lyandres and Schutes both say, the field of study is still far too new to fully gauge impact. But this 2014 research indicates that people could be eating as many as 11,000 microplastics a year—just by eating shellfish. We’ll let that sink in…

Aside from never eating shellfish or wearing fleece again, what can we do?

“We have to continue to fight the good fight as far as reducing our collective dependence on plastics,” says Lyandres.

That includes picking up big stuff at beach cleanups as well as cutting down use of small stuff like face scrubs filled with plastic microbeads.

Scientists need more information, too, on where plastic pollution is really coming from. In the Great Lakes, it may be easier to address questions of source simply because it’s more contained. Once plastic is in the ocean it’s even more difficult to capture, assign sources to, and trace back to something that could be fixed, Lyandres says.

The goal for Schutes and Kollar is to try to stop trash before it hits the waterway. “Once plastics are in the ocean the costs skyrocket in terms of what it takes to clean it up.” To that end, Ocean Conservancy is working to help stop the tide of plastic pollution in densely populated, rapidly industrializing countries, which are growing and producing trash faster than their waste infrastructure can accommodate. It’s also sharing relevant data to support local product and material-specific policies, such as Illinois’ microbead ban and California’s efforts to ban plastic bags statewide.

“It can seem overwhelming,” comments Lyandres. “Plastic is ubiquitous in our world both big and small—but we shouldn’t discount the power of individuals’ actions such as using reusable bags, putting the trash where it belongs, and helping keep shorelines clean in our communities.”

Words to live by, right? Let’s call game over on microplastic pollution!

Small size doesn’t mean small impact. Pollutants glom onto plastics of all sizes, and some research indicates that microplastics adsorb even more pollutants than their bigger counterparts. Plus, it’s harder to clean up tiny microplastics than big plastic debris. 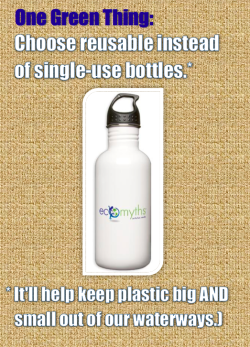 One easy way to keep plastic big and small out of waterways is to choose reusable options like this super cool EcoMyths water bottle instead of single-use options.

“We know plastic is often a very useful product and that it’s not going away—but there are things we as a society and individual consumers can evaluate and change, whether it’s holding off on a straw at a restaurant or picking up one piece of trash from the beach.”

If more people use reusable water bottles instead of single-use plastic ones, we’ll keep excess plastic from polluting our waterways and harming aquatic wildlife. Go ahead, be a game-changer.