Worried about dipping your toe in your local swimming hole? Or even drinking your tap water? Join the club. Nitrogen and phosphorus overload is fouling up lakes, rivers, and streams across the country, creating plumes of pollution that are far more sinister than their deceptively benign algal blooms moniker.

These nutrient-rich blooms are a bust for health, environmental, and economic reasons alike. While ’tis true that N and P are critical for life on Earth, signs abound that we’ve got way too much of a good thing, from rampant beach closures and clogged water intakes, to urgent PSAs along the lines of, Don’t even think about drinking that water!

This year, fortunately, experts are beginning to see a sea change in how we confront nutrient pollution. Generally speaking, public awareness is on the rise, and public and private organizations are working more closely to turn the tide.

We turned to water pros Paul Botts, executive director of the Wetlands Initiative and Joel Brammeier, president & CEO of Alliance for the Great Lakes, to learn more about where excess Ns and Ps are coming from, why exactly we don’t want ’em, and what solutions are already on the table for discussion.

Not Your Usual Polluting Suspects

Where’s all this nutrient overload coming from, anyway? The answer might surprise you. While big factories can look like big-time polluters, they’re often not the biggest source of water pollution, thanks to tough regulations by the Clean Water Act.

Thing is, those regulations don’t apply to what’s called nonpoint source pollution like runoff from farmland—and therein lies the rub.

Modern farming—however efficient it has become at growing food for the American population—includes fertilizing and field tiling processes that send huge amounts of N and P to streams, affecting water far outside a farm’s own zip code.

Plus, Illinois, Iowa, and Indiana are numbers one, two, and three in contributions to the excessive nutrient flow out of the mouth of the Mississippi, says Botts. This overload has created the now infamous annual summer “Dead Zone” in the Gulf of Mexico.

Talk about a landslide.

Smelly, polluting algal blooms have been so abundant lately that there’s all kinds of fresh attention to the murky stuff.

Problems: Near and Far

Houston, we have health, environmental, and economic problems. Many Great Lakes residents have become all too familiar with notices that their water is unsafe to swim in or even drink, and fishing and tourism industries have taken a hit.

All told, an estimated $2.2 billion in economic activity is lost to nutrient pollution, according to research published in Environmental Science and Technology—and that doesn’t even scratch the surface of cleanup costs…

Why Can’t We Just Treat Our Way Out of This?

While costs vary widely depending on geography, the EPA is attempting to gauge costs per state. Lowlights include a study in Ohio showing that more than $13 million was spent in two years to treat drinking water from a lake affected by algal blooms. And in Waco, Texas, total costs incurred to address poor drinking water quality due to excess nutrients from 2002-2012 rang in at an estimated $70.2 million.

As the aforementioned Des Moines lawsuit illustrates, Brammeier notes that cities are starting to question whether it makes sense for them to foot the entire hundreds of millions or even billion-dollar bill to improve water quality.

Shouldn’t all the places where the pollution is coming from pitch in?

There’s no simple answer to this toughie, but some good news is that more people are putting their heads together to come up with answers.

An Ounce of Nutrient Prevention…

Millions of tons of pollutants won’t clean themselves up. “We have to bite the bullet and stop it at the source,” says Brammeier.

“It’s not just a matter of how much will it cost to fix,” he continues. “It’s a larger cultural issue.” Many people in the region take pride in the Great Lakes, and are taken aback by the national attention that comes with dirty water. But these stinky watershed moments may finally be opening people’s eyes to the need for change.

So much offense was taken in Toledo last year, for example, that it helped usher in major new work across geopolitical borders. Ontario, Michigan, and Ohio pledged to cut phosphorus by 40 percent with the help of expert advisers like the ones at the Alliance.

That kind of collaborative approach is clutch, says Brammeier, who admits that intense dairy production and row crop agriculture aren’t going anywhere. “We have to accept that, but we also have to get clean water as part of the deal. We just can’t afford to spend time fighting,” he says. As such, he and his colleagues are seeking ways to use the Clean Water Act and other policies in new ways that bridge the gap between farmers and cities.

TWI, for its part, is working the on-the-ground restoration angle and is working collaboratively with farmers and associations to solve the problem with a suite of solutions.

“There’s not one silver bullet,” Botts adds. It’s about partnerships and innovative approaches. Here are a few currently being piloted or explored:

• Constructing a wetland at the farm itself: Carefully designed wetlands can treat a lot of nutrients coming off farms, says Botts. Perks abound, including estimated removal rates between 20-57 percent, and costs about 50 percent less than the costs of traditional runoff treatment facilities, according to research cited by MIT. TWI believes the cost savings can be even greater if the wetlands are put in just the right spots.

To boot, a TWI study completed in collaboration with Chicagoland’s water treatment board found that wetland treatment, compared to conventional methods, could save the district 51-63 percent of its annual costs to achieve new standards for nutrient levels. (Want more inspiration? Voila, this Wetland Initiative’s wetland time-lapse video brings the solution to life, quite literally).

Possible technical solutions, check. Social and economic solutions, not as much.

Wisconsin is something of a beacon of hope, at least in the social and economic discussion arena. “The cities there are initiating conversations about how they spend money improving water quality in rural areas instead of dumping more money into gray infrastructure,” says Brammeier. “That’s a critical moment in time.”

Let’s stretch that moment across the country, shall we? Spread the word: It’s all about preventing pollution before it starts.

Cleaning up our water at the treatment plant can be far less efficient than stopping pollution before it goes off the land in the first place. Anything else is like a band-aid, says Suzanne Wagner of the Wetlands Initiative. (A really expensive, possibly diamond-studded band-aid, that is.)

Explore your local river, by foot, by kayak, or by Internet. The more each of us learns about these amazing resources, the stronger our collective communities will be to keep ’em clean! 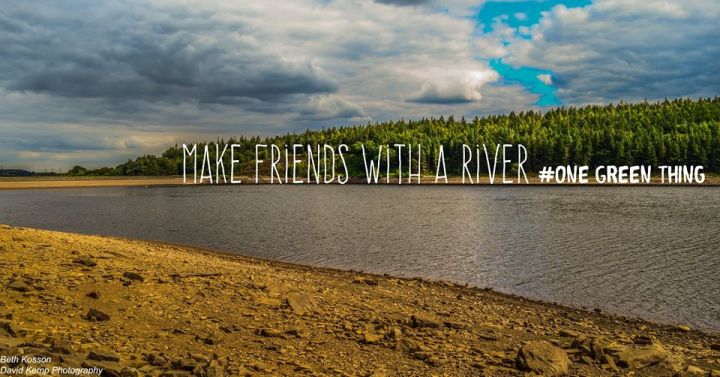 “We collectively know very little about the Mississippi River system and its tributaries. It would help if people in big cities understood how valuable and precious that this amazing, globally significant network of giant rivers is.” ~ Paul Botts

“Just getting in a boat is an act of support for clean water.” ~ Joel Brammeier