Trees do so much to deserve our affection (hello The Giving Tree), and yet pretty much no one thinks it’s cool to come right out and hug the branchy things. In certain circles, it’s an insult to call someone a treehugger, while in many others, the term just sounds, well, uncool—representative of a penchant for talking people’s ears off about the environment, or simply an endearing (but not un-nerdy) sense of idealism.

The thing is, as you’re about to see, that showing your appreciation for trees is actually very cool, whether you choose a full-on embrace, bro hug, or simply a casual nod in their direction. To begin our scientific inquiry of this potential, um, coolness, we chatted with Robert Fahey, PhD, of the Morton Arboretum, who studies urban forests, and Charles Canham, PhD, of the Cary Institute, who is about to publish the results of a long-term study of the impact of climate change on trees.

Wary of the not-so-complimentary connotations, Fahey admits to hugging trees, though hastens to clarify that it’s “usually for research purposes.” Canham is more candid in his enthusiasm: “Because the way we measure a tree is to put a tape measure around it and measure the diameter, I’ve spent lots of time in the last 30 years with my arms around trees…I know it’s often used as a negative connotation, but I’ve had a very good life hugging trees.”

Why take their cue and hug a tree already? Because trees deserve it big time for providing shade and gobbling up carbon dioxide (aka, CO2, aka, the main greenhouse gas in question when it comes to our global warming woes). In other words, they make us all cooler, literally.

Let’s talk about some tree-inspired lingo that has a much cooler rap: We’ve got it made in the shade. Aside from the obvious benefit of keeping you from sweating through your clothes on any given sweltering day, tree shade also helps cool the ground and the air around it. Thanks to shade and transpiration (science speak for leaf sweat evaporating into the air), trees make a big difference in cooling surface and air temperatures, which is increasingly important as we face the reality of a warming planet. (Quick cheat sheet: According to a vast wealth of science, including NASA, the earth has been steadily warming since 1880, with 10 of the warmest years occurring in the past 12 years.)

How big a difference does tree shade make in the temperature around it? Shaded surfaces can be 20-45 degrees Fahrenheit cooler than unshaded ones, and that transpiration process we were talking about can help reduce peak summer temps by 2-9 degrees, according to the EPA. That saves you moolah by reducing the need for AC, of course—which in turn saves energy emissions associated with cooling buildings. Cha-ching!

This cooling effect is especially important in cities, where hard surfaces like concrete and asphalt make the city hotter than nearby and comparatively “softer” suburbs and rural areas. Big cities can be an average of 2-5 degrees hotter than outlying areas—or even, in some conditions, as much as 22 degrees warmer, says the EPA.

Off the Hook CO2 Chowdown

Another thumbs up for trees is their knack for consuming carbon—which is clutch, considering the amount of CO2 in the air is way higher than it has been for the last, oh, 650,000 years, according to the Intergovernmental Panel on Climate Change, a consortium of scientists and policymakers established by the United Nations and World Meteorological Organization that now counts 195 countries as its members.

In fact (wonk alert!), CO2 levels have gone from about 250 parts per million (ppm) since the Industrial Revolution when we started burning stuff like coal, gas, and oil to produce energy, to 379 ppm in 2005. Now, according to NASA, the count has reached 400 ppm. (Yikes.)

And that’s where trees come in again…they play an invaluable role in regulating climate because they make oxygen from CO2, and store the leftover carbon in their trunks, roots, and surrounding soils. Yep, this whole photosynthesis business really does pay off: Forest Service research found the amount of CO2 stored by trees amounts to 16 percent of the country’s 2012 emissions.

To bring that carbon sucking into tighter focus, just consider that a single acre of U.S. forests consumes an average 1.22 metric tons of CO2 per year—the same amount of CO2 emitted by burning 1,310 pounds of coal, according to the EPA’s calculator.

Does this mean we rely on trees to save us from carbon doom? Nope. For one thing, the increased levels of CO2 on the planet are actually decreasing plants’ cooling ability, according to the Carnegie Institute for Science. And for another, some tree species are already being damaged by climate change-related issues like an uptick in severe weather, fire, pests, and disease. (For the bigger picture on that, check out our blog featuring more detail from Canham and Fahey: Global Warming’s Not-So-Hot Impact on Trees.)

All in all, keeping trees around is a good way to stay cool. So how can we help them continue to help us? Let’s start by agreeing that trees make us cool—and therefore sending them some love and hugs can, too.

Treehugging is cool! Trees themselves keep us cool by providing shade and storing carbon, so showing these climate change heroes some love is “cool by association.” Let’s bring it in for a hug already. 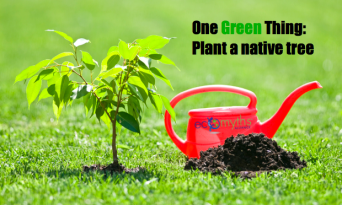 The multiplier effect: If 100 people in every U.S. state plant a tree, those trees could potentially keep 116,000 pounds of CO2 from contributing to greenhouse gases. (Based on EPA calculations.)