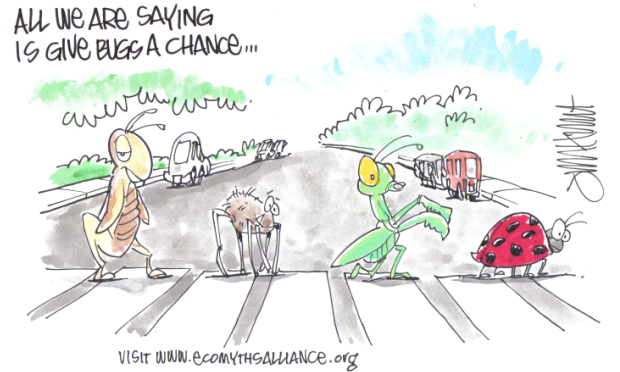 Think eating bugs is gross? You’re not alone. To many Americans, bug eating, or entomophagy (yes, there’s a fancy word for it) belongs only on extreme TV and in remote corners of the world. But the truth is, most of us eat bugs on a daily basis without ever knowing it. And even if we swore off all the food and drinks that do contain them, everything we consume depends on arthropods in some way or another.

We chatted with a few experts (Margaret Thayer, PhD, associate insect curator at the Field Museum; Andre Copeland, interpretative programs manager at the Brookfield Zoo, currently hosting the Xtreme Bugs exhibition; and UIC professor David Wise, PhD) to find out how important these critters are to our diet.

First, a lingo note. When most of us use the word “bug,” we usually mean anything that’s a.) tiny and b.) clearly not a mammal, bird, amphibian, or reptile. But “bug” is not synonymous with “insect,” since the insect class doesn’t include some of the best-known bugs, like spiders, centipedes, and mites. So when we talk about bugs from here on out, we’re talking about the larger group of arthropods—specifically the land-dwelling ones, which, together with their water-dwelling brethren (crustaceans), make up more than 80 percent of Earth’s described species.

A Magical Mystery Tour of Entomophagy

First, let’s get the elephant (beetle) out of the room: You’ve probably eaten arthropods very recently, possibly even today. Although you won’t find “crushed up beetles” or “insect secretions” on any labels, that’s exactly what makes plenty of everyday foods shiny and/or red, from candy, yogurt, and soda to produce, ketchup, and frozen meat.

“Lots of people don’t realize that when we eat certain types of candies or ice cream with sprinkles, we’re actually eating secretions,” remarks Copeland. With the FDA’s go-ahead, shellac, a resin secreted by the lac bug, is in virtually every section of the store, from candy coating to the waxy stuff that makes some fruits and veggies shiny to shampoo and vitamins. Labels list it as any of the following: Confectioner’s Glaze, Natural Glaze, Resinous Glaze, Pharmaceutical Glaze, Pure Food Glaze, or Lac Resin.

As for red products, cochineal extract (or crushed, concentrated Dactylopius coccus insects), aka Carmine, Crimson Lake, or Natural Red 4, got a lot of recent attention when Starbucks admitted using it to color its strawberry Frappuccinos. Even though Starbucks has since ditched it, you can find cochineal extract in everything from processed poultry and beef to pie fillings, dairy products, and salad dressings. “Some people have that ‘Oh my god’ moment at first,” says Copeland, “but then they think ‘wait a minute, I don’t want to ingest chemicals’” like the other most-used dye, petroleum-based red dye 40. For those people, he adds, “the answer is all natural—and sometimes all-natural ingredients come from bugs.”

There’s also a growing movement of Americans trying to hype up bug eating. You can nosh on cricket pops at Hotlix in California’s Pismo Beach, or banana cricket fritters at the Brookfield Zoo outside Chicago. (For more inspiration, check out Air Tran magazine’s list of other bug-purveying spots around the country, or visit our blog for a finger-licking recipe from the Xtreme Bugs’ Bug Chef himself.)

Even our own experts have taken the plunge. Thayer speaks highly of the grilled scorpion skewers she enjoyed at a recent Entomological Society meeting. And Copeland says he’s a big fan of the Bug Chef’s Cajun crickets, which he describes as tasting like seasoned sunflower seeds. “I actually like them better than popcorn—I wish they served it at the movie theater!” he says.

Grossed out? Let’s not forget that bees make honey by regurgitating nectar…

Why People Eat Bugs Here, There, and Everywhere

The new buzz around stateside bug cuisine may not vanquish your highly developed shudder reflex. But it’s important to note that this is most likely a cultural thing, since a quick survey of the world reveals that we’re one of the few countries to deem entomophagy icky.

Yep, many cultures eat bugs purposefully—and for good reason. “They’re a concentrated source of protein and fat, and that’s why they’ve been picked up as food sources in lots of places,” explains Thayer. “If you live in a village where thousands of termites are flying from a giant mound, you can just pick them up and eat them to get free and easy calories.”

That’s partly why the Food and Agriculture Organization of the United Nations (FAO), is such a big supporter of entomophagy. On its website, the FAO points out exactly how many cultures eat bugs worldwide—we’re talking 36 countries in Africa, 29 in Asia, and 23 in the Americas. “Insects are highly nutritious. Some insects have as much protein as meat and fish. In dried form, insects have often twice the protein of fresh raw meat and fish,” according to the report.

Want more nutritional deets? Bam: When a University of Ohio study compared 100 grams worth of Lepidoptera to the same amount of beef rib roast, the moths had four more grams of protein, 300 milligrams more calcium, and 31.5 milligrams more iron than the beef. And NOVA points out that an ounce of grasshoppers has 3 times more protein than an ounce of beef.

But nutrition isn’t the only thing about bugs that’s worthy of fanfare. As a food source, bugs could be far more eco-friendly than meat. Another FAO report calls the livestock sector “one of the top two or three most significant contributors to the most serious environmental problems, at every scale from local to global.” The report goes on to say that livestock production is responsible for 18 percent of global greenhouse-gas emissions­—more than is produced by transportation worldwide. That makes bugs an appealing food source for environmentalists, since they need way less water, land, and food resources to produce.

Still not won over? Don’t worry. You don’t have to eat bugs to appreciate ’em.

All You Need Is Bug Love

Even if we choose not to eat them for dinner, bugs play a vital role in the food web. Agriculture depends on pollinators and predaceous (read: predatory) bugs alike. And even the tiniest organisms of all play a vital role in facilitating the nutrient cycle, which is necessary for ecosystem health.

Wise believes that most of us don’t get how important bugs are, “because they’re a nuisance—and many are. But we don’t realize all they do in terms of involvement in nutrient turnover and terrestrial ecosystems.” Those tiny critters are responsible for some big stuff, from aerating soil and pollinating crops to providing food for many other animals.

As an example, Copeland points out that European honeybees are responsible for pollinating one third of our human-digested crops. That, he explains, is in part thanks to the largest managed pollination event in the world, which takes place in California almond groves. There, every spring, a few billion bees in 1.5 million hives help produce 90 percent of the world’s almond supply.

This isn’t to say that all bugs are always good. Pests are ones that we don’t want to see too much of, and pest overpopulation is a very real problem. Controlling these pest species is another big way bugs help us out.

Gardeners and farmers will likely agree that the big-eyed bug and praying mantis are our friends, since they control the size of certain populations that feed on new plant growth, like aphids and caterpillars.

On a larger scale, Thayer says parasitoid wasps or flies have become a vital part of bio-control efforts against pest insects. Each of these hired guns lays eggs in the pests’ larvae, grows inside it, then kills it when it reaches full development. Once that’s done, the adult parasitoids “come out and do the same thing over again,” she adds.

The army ant is another great candidate for pest control, enthuses Copeland. “People are familiar with their legendary drives. Two million army ants march across a forest floor, or 20 million across a savanna, devouring anything in their path. What people don’t realize is they’re actually doing a great service to the environment by cutting down the population of crop-destroying bugs,” he says. In some South American communities, he explains that people move out of the way to purposefully let the ants come in and take away the scorpions, roaches, and spiders. “Basically for all the pests we’d call Orkin to get rid of here, the ants do it for them there.”

And finally we’ve got spiders. “People have very negative feelings about them, but don’t realize all the different food webs they’re part of,” notes Wise. One of their biggest and best roles is in pest control. Some estimates suggest that spiders kill a billion crop-destructing insects per acre of farmland annually. “Even if you take the economics out of it, without spiders alone, crop-destructing pests could destroy our crops here in the prairie states and beyond,” comments Copeland.

Americans (and pretty much everyone else on Earth) eat bugs, both knowingly and unknowingly, and for good reason. From coating our candy, pollinating our crops, or mitigating pest populations in our fields, arthropods are intrinsically linked with our food.

All we are saying, is give bugs a chance. Our experts each agree that the biggest problem we’ve got is lack of understanding. So, as Thayer says, don’t just stomp on them when you see them! Instead, get to know your bugs, at least just a teensy bit, and we’ll all be a little bit closer to a happier, healthier habitat.

More ways to help:
• Get involved with citizen science programs, such as the Illinois Butterfly Monitoring Network, the U of I BeeSpotter, the Dragonfly Monitoring Network (scroll down page), or Monarch Watch.
• If you’ve got kids, encourage their interest in bugs. They’ve probably got it naturally, and it’s usually society that, well, squashes it out.
• Buy organic food as much as possible to encourage farming done without the use of bug-killing pesticides.

Multiplier effect: For each spider’s life we save simply by not stomping on it, we’ll keep around 100 other insects from hanging out around the house.