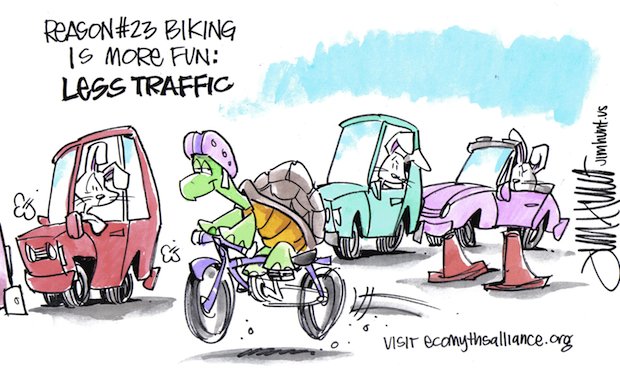 Remember how much you longed for your first car? Whether it was a hot rod or a hot mess, it didn’t much matter—a car meant freedom, a passport to the endless road. Today, though, there’s a growing movement away from the car culture, with close to 30 percent of Chicago households living car-free.

From cleaner air to better health, and of course, lower bills, more people are giving up the wheel…for a couple of thinner ones.

But does taking a more active form of transportation mean you’ll inevitably show up smelly and late to the party? Nope. Putting a little more legwork into your transportation routine can be simple and rejuvenating as well as eco-friendly.

It’s Easier Than You Think to Go With Active Options

“There’s definitely a myth that commuting by bike or transit is so much harder than driving—and that’s just not true,” observes Active Transportation Alliance (ATA) spokesman Ethan Spotts. “There are certain things that can make it more challenging at first, but with the right know-how, you can easily get around.”

To begin with, he points out that almost 40 percent of all trips in Chicago are two miles or under—yet 90 percent of those trips are made by car. Short drives like that would be easy for many of us to replace with a combination of walking, biking, or public transit. Same goes for the 60 percent of area trips that are three-mile distances.

For longer trips, public transit tends to be cheaper than driving, and can often be faster, too. That’s obviously truest in more concentrated urban areas, but suburbanites can hop on the Metra for a faster commute than the CTA trains offer.

Tackling longer trips with a bike can seem more of a toughie, since there’s the added threat of sweat to consider. “I am a sweater. I sweat like crazy,” admits Spotts. “But even though I bike 10 miles each way to work, I’ve never had a meeting with the city of Chicago and had them say, ‘Man, you smell really bad.’ I have heard them say, ‘Hey, you look great in a suit. I can’t believe you rode your bike here.’”

So just how does he manage to show up to work on time and still look professional? It’s all about planning, he says. Give yourself enough time to slow down in the last mile, and get there a few minutes early to cool down and do a deodorant check. (For more biking tips and tricks, head to ATA’s Bike to Work page.)

On the weekends, ditching the car to run errands may seem like an especial hassle for families. But Spotts and his wife recently had a baby, and the three of them handily made it through their first winter together without a car. That’s not to say cars are off limits for Spotts’ family—for big shopping trips, they use I-Go carshare, and for out-of-state road trips, they rent a car.

What about inclement weather, you may ask? Spotts believes biking to work in winter gets a bad rap, and that if you take certain measures, you’ll actually enjoy it.

Another common concern is that cars are the only way to get to pretty nature areas outside the city proper. For some insights there, we turned to DePaul University environmental science professor Liam Heneghan, PhD, another car-free enthusiast. He bikes or takes the train to school and around town. But nature (and duty) still call him to wilderness areas further afoot. His suggestion: Remember that regional public transit offerings abound to get you to out-of-town natural areas. He recommends checking out this Chicago Wilderness article that maps out a few simple public transit routes to parks.

Okay, so active transportation options are more doable than meets the eye. Still, any behavior change takes effort to start…so why bother? Because there are a bevy of environmental and personal health benefits that exist when we curb car use, that’s why.

Saving the Planet, One Mile at a Time

It’s no secret that car emissions dirty up our local air and contribute to global warming. There’s also the heavy toll of fuel on the world’s natural resources to consider. An average 2005 sedan traveling 10,000 miles a year spews out close to 7.5 tons of CO2 a year, according to the Nature Conservancy’s Calculator. Cars also make up 51 percent of the average household’s contribution to CO2 emissions, reports the U.S. Department of Energy. This means that every single trip we take without a car helps us turn the tide on air pollution, climate change, and fossil fuel consumption.

Not all the environmental implications of driving are as well known, though. “Roads really are the enemy of conservation biology,” contends Heneghan. “Even a little path through a field or quad or park significantly diminishes the traffic [capability] for invertebrates, and has major implications on dirt.” The more cut off the tiniest of organisms are from each other, the tougher it is for them to flourish—and thriving soil communities are crucial for the whole food chain. Look at the Chicago Wilderness vision, he suggests, which imagines a suite of interlinked, protected sites—that don’t include roads and cars. “Chicago has all these areas of high-quality global preservation significance…It’s certain that if we became less car-oriented, the possibility of improving the linking up of habitat areas would increase.”

That all seems good for the planet…but what about you?

Looking Out for Number One: The Personal Benefits of Active Transportation

With rocketing obesity and diabetes rates, it’s become increasingly important that we re-energize ourselves. One simple way to do that is to add more movement to the routine, from biking to the train and hoofing it upstairs to simply walking to catch the bus. To be sure, any combination of active transportation options will burn more calories than a door-to-door car trip.

“Active transit will make you healthier,” declares Spotts—a statement he says is echoed by many in the medical community, who see going car free as an opportunity to increase physical activity and reduce driving injuries. For example, Spotts mentions that public transit users get an average of 19 more minutes of walking per day than drivers. “That’s two thirds of the weekly activity recommended by the CDC. Public transit users are an average of 6.5 pounds lighter and over time, they’re 81 percent less likely to become obese than drivers.”

Employers would also do well to encourage more active commuting for their workers, notes Spotts. In addition to cutting parking expenses, an employee base that walks, bikes, and takes public transit reduces the company’s healthcare expenses and absenteeism rates. And speaking of costs, there’s no denying that biking or walking is cheaper than gas.

There’s a less tangible but equally meaningful benefit to engaging in more active transportation, believes Heneghan. “Really slowing down as a transit commuter, cyclist, or pedestrian reminds you that there are benefits to casting your net close.” How often do we just speed through our own neighborhoods, failing to notice what’s on our own street corners? According to this philosophizing scientist, life is richer when we’re more aware of “the possibility of things that are proximate.”

Heneghan is such a fan of this notion that he recently assigned a class to take a five-hour walk through Lincoln Park. “It was kind of a risky assignment because I didn’t give them any strenuous guidelines…I just wanted them to be open to experience what happens when you take a walk of that magnitude.” Did many of them daydream? Probably. But that’s another activity Heneghan thinks is important to keep up. With our increasingly busy schedules and access to technology, staring out the window and reflecting often goes by the wayside. He believes walking, biking, and taking public transit provides us with more opportunity not just for reading and observing, but also for good old-fashioned rumination.

His advice: give yourself a certain period of time to test out a new mode. Try taking a train, walking, or biking more often for one month, and pay attention to what you see as you go. “I have a suspicion that for some people, it’s going to end up not just being a matter of pragmatic and environmental considerations—I think they’ll like what happens to their mind when they’re not driving.”

You don’t need to be hard-core to reduce car use when you incorporate biking, walking, or public transit into your routine. It’s especially easy to leave the car at home for short trips, and there are plenty of resources available to make longer trips easy as well. And whatever you think you’ll lose in convenience, you’ll more than make up for in terms of environmental and personal benefits.

Enjoy riding your bike for a few of your weekly  trips instead of taking the car.

Other ways to help:
• Participate in ATA’s Bike to Work Challenge, June 11-15. Biking any portion of the trip just once during the week counts.
• Tell your elected officials you support improved bikeways and increased access to public transportation.
• When driving, watch for bikers and pedestrians. Even if biking still isn’t your scene, driving safely and conscientiously is a great way to support active transit.