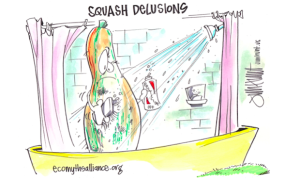 Welcome to the fall harvest, ground zero for comfort food obsessions. Visions of gourd-laden tables, steaming pots of soup, and fresh-baked apple pie are already dancing in our collective heads. So in celebration of the national treasure that is our produce supply, let’s take a moment to reflect…on the organic question.

You may have about a recent Stanford study of the health benefits of organic food. One of the research team’s conclusions was that there’s a lack of “strong evidence that organic foods are significantly more nutritious than conventional foods.” Studies like this raise important questions about why organic matters.

The thing is, going organic isn’t really about fortifying nutrition anyway (an apple is an apple and all that)—it’s about keeping pesticides off our lands and out of our bodies.

Here’s a little about why it’s still important to give organic peas (and other produce) a chance.

Thinking Beyond the Nutrient: Why Organic Still Matters

Though the nutritional findings are what stole the media show, the Stanford study does confirm that the more organic you eat, the less exposure you’ll have to pesticide residues and antibiotic-resistant bacteria. That alone is reason enough to go organic, when you consider the health risks associated with many pesticides.

Take apples, which are number one on the Environmental Working Group’s Dirty Dozen list of things that are better to buy organic. According to What’s on My Food, an online database that details which pesticides are found on what food, USDA researchers found 42 pesticide residues on non-organic apples. Of those, 7 are known carcinogens, 19 are suspected hormone disruptors, 10 are neurotoxins, and 6 are developmental or reproductive toxins. (Cue shudder.)

Let’s not forget the significant costs of pesticide use on the environment itself. Simply stated, pesticides kill pests like insects, mice, weeds, and fungi—all of which are vital to a successful ecosystem. As the U.S. Fish and Wildlife Service says on its website, “By their very nature, most pesticides pose some risk of harm to humans, animals or the environment because they are designed to kill or adversely affect living organisms. Significant fish and bird kills have resulted from the legal application of pesticides, with millions of fish and birds estimated to die from pesticide exposure each year.”

What’s more, valuable pollinators like bees, birds, and bats are also vulnerable to pesticides—a fact that puts food production at risk. In the case of the non-organic apple mentioned above, for example, 17 of the pesticide residues found are toxic to honeybees, which are critical pollinators in sustaining our crops.

Pesticides also affect far more territory than the immediate land on which they’re sprayed. The British Columbia’s Ministry of Agriculture has a basic primer on the myriad ways pesticides go well beyond the crop in question to wreak more widespread havoc.

Organic food is not overrated. While the Stanford study may show that organic food does not yield richer nutritional content than non-organic, the significant environmental impact of pesticides still make organic an important option in the produce aisle.

Note: Organic does not always trump local in terms of environmental impact—nor does the reverse apply. Stay tuned for the EcoMyth on local, in-season food, coming soon.

If 10,000 of us opt for organic groceries, we’ll help keep toxic pesticides off 18.75 square miles of land—roughly the size of Providence, Rhode Island.