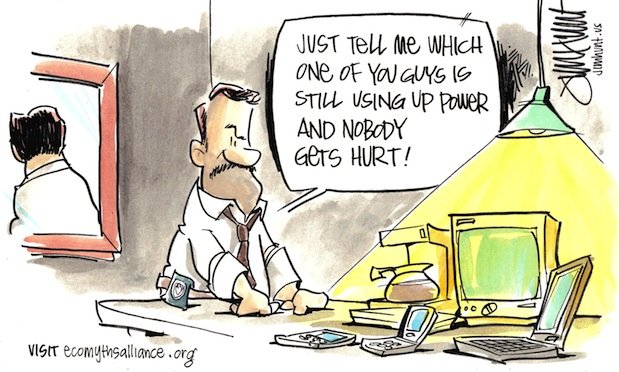 It may seem like a no-brainer: You turn off your TV, your iPod player, your phone charger, and they’re done using electricity, right? Nope. Turns out, plenty of products still suck power even when they’re not on.

Standby loss, more popularly known as vampire power or phantom load, accounts for a surprisingly large chunk of the average home and office’s electricity bill. Several sources, including the Lawrence Berkeley National Laboratory (LBNL), suggest that it can constitute as much as 10 percent of residential energy use.

In other words, most of us are basically throwing money out the window—just by making the reasonable assumption that when something is off, it’s actually off.

Not all electrical products draw power when they’re “off”—it’s typically the ones with an external power supply, a remote control, or a display like an LED screen. Still, the average American household includes 20-40 of such items, from DVD players and computers to cell phones and coffeepots, according to LBNL. It can also include microwaves, refrigerators, answering machines, audio systems, and more…basically anything that’s standing by ready, to spring into action.

Want to learn more about the usual power-sucking suspects? Take a peek at this handy LBNL chart to find out how much standby power is lost to each.

Why the term “vampire power”? Electronics and appliances have two teeth, er, plugs, they can plunge into the outlet, sucking up electricity even when they’re off for the night.

Why Standby Loss Is Kind of a Big Deal

There’s one glaring reason to try to banish the phantom load from your home: Free money, in the form of cutting ye olde electric bill. With the U.S. average ringing in at 12 cents per kWh, the numbers add up. Take an average desktop computer, for example. If left in sleep mode half the time for a year, it would use about 95 watts according to LBNL, costing $10 on your bill.

Also costly, though, is the very real environmental toll of maintaining our energy supply.

Standby loss is responsible for 1 percent of our polluting greenhouse gases, according to the latest data from LBNL. As Northwestern University’s Eric Masanet, PhD, says, that’s pretty high given that it’s coming from equipment that isn’t providing any use to us.

Furthermore, in a recent video dedicated to “putting carbon in its place,” Masanet explains that the average household generates 50 metric tons of CO2 per year, 5.5 of which typically comes from electronics and appliances. Considering the 10 percent household energy use stat we mentioned earlier, this means standby loss could contribute more than half a metric ton of CO2 per household annually. According to this EPA calculator, that’s as much carbon as is sequestered by 14 tree seedlings grown for 10 years…all to power items that aren’t even in use.

But there’s an even bigger picture to keep in mind. George Crabtree, PhD, of Argonne National Laboratories and UIC, points out that though the U.S. makes up only 5 percent of the world’s population, we use 25 percent of its energy. “The rest of the world wants their share, so as a globe, we have to produce a lot more energy over the next few decades—and that’s not easy to do.”

What is fairly easy to do? One word: Unplug.

Turning an electrical product off doesn’t stop the energy draw. For many items, unplugging it is the only way to stop the suck.

Unplug a device when it’s not in use. Using a power strip helps make that even easier.

If 25,000 households cut standby loss in their homes in half, we’ll annually stop CO2 emissions equivalent to 770,740 gallons of gas from polluting the environment.

*Many thanks to Eric Masanet, PhD, engineering professor at Northwestern University, and George Crabtree, senior scientist and distinguished fellow at Argonne National Laboratories and professor at UIC, for providing expert counsel and review on this article.