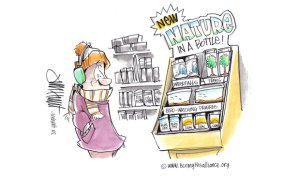 Dear Nature, you were a great fling, but now that winter is here, I’m thinking I’ll stick to the inside world. —Sincerely, Your Summer Romance

When you think about it, nature can really seem like the perfect commitment-free relationship: no matter the season, you can have fun together whenever you want, for as long as you want. Especially in Chicagoland, where we’ve got 26 miles of open lakefront in the city, and 68,000 acres of forest preserve in Cook County alone. Even in the coldest, craziest “worst of winter” winters (hello, Snowmaggedon), there’s sledding, snow angel-making, snow cream ingredient gathering, and cross country skiing to be done.

But is getting outside more than just another chance to have some fun? We chatted with area experts to find out more about the broader benefits of incorporating nature into our lives. Turns out: a little nature goes a long way in terms of its impact on mental, physical, and community health.

First Look: Studies Show Nature Views Are Good for You

Anyone who’s ever spent more than five minutes in a college dorm or office built circa 1970 knows: brick walls do not make for a particularly scenic view. But what does it matter if we can’t see sky, trees, or other greenery from our windows? This line of questioning has inspired a movement in psychology and urban planning study, from government agencies to university labs nationwide.

“The need for both visual and physical access to nature is built into who we are,” says Lynne M. Westphal, PhD, a research scientist in the U.S. Forest Service’s Chicago office. Her team studies how public land use, infrastructure development, and resource conservation affect urban communities, so she’s got plenty of insight into the history of this field of study. While the Chicago office opened in 1978, she says that one of the first truly groundbreaking studies of nature’s restorative benefits was published in Science magazine in 1984. In it, Roger Ulrich found that hospital patients who had a view of green space recovered more quickly, had fewer post-op complications, and had a better outlook than patients whose windows looked out onto a brick wall. Not too shabby for a simple window view, right?

And that was just the beginning. Since then, more research scientists have added to the mounting evidence that nature has its fair share of mental perks. Stephen and Rachel Kaplan, professors at the University of Michigan, are also pioneers in the field of environmental psychology. Their investigations have shown that engaging with nature—unlike certain mental-fatigue-inducing activities like working, doing our taxes, or washing the dishes—triggers a different process in the brain, capturing our involuntary attention and letting the part of the brain that handles the targeted attention rest.

So what? Well, turns out that ever-so-brief relaxation means we can sustain mental energy through the work or school day better. “People feel that they’re more productive when they have a view of green space,” says Westphal, who added that there’s additional evidence that nature views have a positive impact on things such as standardized test scores and graduation and matriculation rates.

All in all, there’s plenty of reason to make sure you have access to a nice view. But once you’ve got said view, are you done? Is all the benefit in the view itself?

Yes, a picture of nature is worth a thousand words. But getting out in nature carries the same psychological benefits as just looking at it does—and more so because, as Westphal says, “you’re not going to hear ‘You’ve got mail!’ when you’re out in it.”

This line of thinking has inspired deeper scientific inquiry into the broader benefits of nature in our communities. “In the last decade or so, rigorous work on this question has become more of a rule than an exception. The studies aren’t simply relying on what research participants report to be the benefits of nature. The benefits have been measured objectively using data such as police crime reports, blood pressure, performance on standardized neurocognitive tests, and physiological measures of immune system functioning.” That’s according to Frances Kuo, who has studied the connection between greenery and human health at UIUC’s Landscape and Human Health Laboratory since co-founding the lab with William Sullivan in 1993.

The team’s research has led them across the city—and country—from public schools to commercial areas to private homes. In a study that took place in local public housing, where the buildings were identical and featured mostly barren landscaping, researchers found some surprising results: people knew more of their neighbors in the buildings that had more green space around them, and there were fewer reports of domestic violence. On a similar note, the lab’s Green Streets Not Mean Streets report found that more vegetation in an area is linked with reduced crime rates.

“Research points to the importance of a healthy human habitat,” states Westphal, “but we need to watch out for taking too much of a cookie cutter approach or suggesting that built is bad. We make great use of built environment as human beings, but weaving nature into it is a helpful thing for us whether we recognize or feel it or not.” What’s one prime example of these seen and unseen benefits she mentions? Using trees and other vegetation in unpaved areas to absorb stormwater and clean particulates out of the air—while providing a view. “That pretty tree out the window can do all those things,” she explains.

And in addition to making us happier and healthier, valuing natural spaces in urban areas is good for the planet too. The UFORE/i-Tree Eco model estimated that there are about 3,585,000 trees in Chicago with canopies that cover about 17.2 percent of the city. That means our lovely urban forest currently stores about 716,000 tons of carbon, and removes about 25,200 tons of carbon and about 888 tons of air pollution per year. What’s more, it’s an economic boon: the city’s trees reduce annual residential energy costs by about $360,000 per year.

Yep, survey says: nature is good for our communities, our mental and physical health, and our wallets too. Basically it’s the whole package, right?

Leave No Child Inside…Even in Winter

From the big picture we go to the little one, or in this case, hundreds of thousands of ’em: children. Nonprofit coalition Chicago Wilderness is a leader in the effort to connect local kids with nature, working with partner groups on its Leave No Child Inside Initiative to encourage families to spend more time outside. Emilian Geczi, MS, who coordinates the initiative, cites the UIUC research as just some of the evidence that access to nature has clear social, emotional, and physical health benefits for children of all ages.

But how can today’s busy parents actually get their kids out into nature on a regular basis? Geczi rattles off ideas about taking advantage of those little in-between moments to incorporate nature into your daily routine. “There are plenty of things parents can do while they’re walking to school, the neighborhood grocery store, or even along a sidewalk in a very urban area. Just take the time to look up in the trees, look down in the grass, feel the bark of the tree…kids love to collect leaves—they love to collect anything. Just point out to them a couple of different shapes of leaves and they’ll start bringing them home in droves.” He also suggests taking a moment at night to look up at the stars together.

As Geczi says, even those simple acts can “kindle that sense of wonder and give kids some time to observe the world around them.”

Myth busted. Time outside is fundamental to good physical, mental, and community health—as well as lots of fun. As Westphal says, “That doesn’t mean everyone has to go be a forest ranger. It just matters that we see that sky, trees, flowers—they aren’t just amenities. It matters for who we are. And it matters in the winter as much as it matters in the summer.”

Want to get more nature in your life? Take a cue from our experts and get outside this winter:

Westphal: “Reverting to childhood is always good…making snow angels, building snowmen…I love the lakefront all year, but going to a sand beach when ice is all built up is just a totally transformed landscape.”

Geczi: “I’d definitely check out places for sledding. It’s such a fun thing tof do and kids of all ages need it. You don’t need much special equipment and there are sledding hills in towns and forest preserves—some are even lit up at night—just ask your park district.”

—Photos and writing by Daisy S.