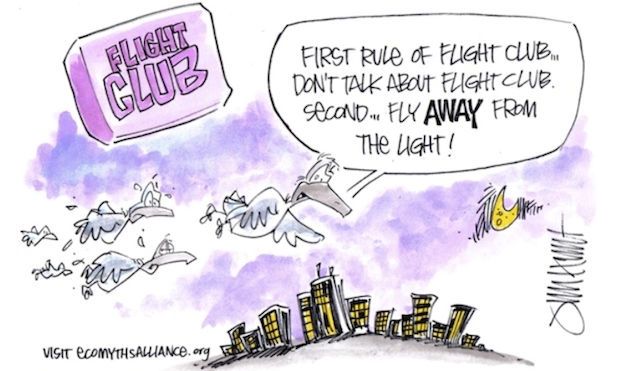 The average bird can cruise between three-inch openings in dense woodlands at upwards of 20-30 mph. So they should have no problem maneuvering their way around giant urban buildings, right? The answer is…not so much.

Experts say that between 100 million and 1 billion birds die each year in North America due to building collisions alone. Surprisingly, this figure doesn’t include bird kills associated with wind turbines or communication towers, both of which cause drastically fewer deaths by comparison*. And with Chicago being a hotspot for migrant songbirds, our tall buildings make us an especially treacherous fly zone.

So why can’t the usually savvy flyers get around these giant concrete blocks? We went to a few experts for the answer: Doug Stotz, PhD, conservation ecologist at the Field Museum, Annette Prince, president of Chicago Bird Collision Monitors (CBCM), and Caleb Gordon, PhD, an avian ecologist with Normandeau Environmental Consulting.

According to their research, the whole bird versus building dilemma goes a little something like this…

The fact that many of us have never seen a bird hit a downtown Chicago building can make it hard to see this as a widespread problem. But data shows otherwise. For one thing, we’ve just got a lot more birds passing through than other urban areas do. As Gordon—whose friends call him the Bird Guy—explains, we’re “in the crossroads of America for birds.”

How much of a threat do buildings pose for these nomads? They’re “probably the number-one source of mortality in Chicago,” speculates Stotz. While there is no accurate estimate for a collision-related mortality rate in the area, he confirms that it’s “certainly tens of thousands.” It’s easy to see why that is when you learn that the average big building kills 1,000 birds a year if it’s lit up, he adds.

That said, we do know that CBCM’s volunteer team scours downtown Chicago streets to recover an average of 7,000 injured birds a year, including 150 different types of migrant bird species. Prince says the most commonly found birds are the white-throated sparrow, brown creeper, yellow-bellied sapsuckers, and ovenbird warbler. Of the birds the 100-strong volunteer team recovers, about 40 percent are treated, tagged, and released back into the wild by the USFWS, while the 60 percent that are fatally injured go to the Field Museum’s bird collections for research.

Navigating city buildings is far more challenging for birds than flying through dense woodlands for a few key reasons—not the least of which is that they’re often actually drawn to these buildings.

As you might guess, these are all connected. With glass, it’s not just the fact that birds can’t see it that matters. It’s what’s on the other side of them that’s problematic. When lit, lushly landscaped lobby areas—and even a single desktop plant—can attract birds’ attention when they’re looking for a place to roost in the dark morning hours. Same deal for reflections: When the glass reflects nice leafy branches that are outside, birds head straight for the reflected mirage.

Lights themselves also perplex birds, perhaps because birds use the stars and moon to orient themselves (and building lights can look a lot like celestial beings). Both Stotz and Gordon mention this theory as a possible explanation for why birds sometimes circle a lit building top for hours, only to drop out of the sky in fatigue. So many birds can be drawn to such light that Stotz likens them to moths crowding around a porch light.

Gordon offers another twist. “Lots of times migrants have just flown 300 miles in the middle of the night. When they see the sun start to come up, they start going down for landing—in a place they’ve never seen before.

“They’re strangers in a strange land and don’t know their way around,” he continues. “So here are lots of lost, tired, disoriented birds not knowing where to land, looking desperately for a tree and smacking into glass.”

Pretty depressing, when you think about it. And that’s not all.

The X Factor: Other Issues at Play

You may wonder if certain birds have it worse than others. Yes and no. Yes, if you’re a migratory songbird, which constitutes most of the avifauna in North America, says Gordon. What’s more, they make up about 95 percent of what comes in as window-kill, reports Stotz.

Still, none of our experts believe any one species is more or less adept at “running the gauntlet of buildings,” as Stotz puts it. They say there’s no biological evidence that one species is more likely to crash into buildings than others—but there are some they see more frequently.

One such example is the American woodcock, which, Stotz says, seems to have a lot of “determination when it flies. It just buzzes straight ahead in one direction, and you can sort of see that it’s not going to stop until it hits something.” Gordon echoes this less-than-flattering portrait, describing the woodcock as “a softball with a beak. It’s like a little fat tub of lard and the only way they can stay airborne is to fly very, very fast.” On the other hand, hummingbirds are among the fastest and nimblest of birds—and they too routinely smack into windows.

Timing plays its part too, in more ways than night and day. Most collisions occur in fall and spring, aka migration season. And of that, more take place in fall, in large part due to larger fall populations after spring nesting season. Weather also makes a difference—cloudy, foggy, or windy weather can impair a bird’s ability to safely navigate city buildings.

One surprising thing is that building height doesn’t seem to matter. Fallen birds are just as often found at the base of short buildings as they are skyscrapers. Low-level collisions typically occur in lit lobby areas in the hours before dawn, as well as during the day when reflections are clearest.

The Bright Side: Chicago Is Making Progress

Lots of doom and gloom on this topic, huh? Luckily we’ve come a long way in the last few years. Field Museum research reveals that dimming the lights at certain times can reduce kills by 80 percent, says Stotz. That, along with some serious encouragement from allies like CBCM, inspired the City of Chicago to adapt its Lights Out plan, which advises buildings around town to turn off the lights between 11 p.m. and dawn in spring and fall.

“Chicago really has achieved one of the highest levels of voluntary compliance,” contends Prince. Up until CBCM was launched in 2003, many buildings were still leaving their lights on. “There was not much awareness. But we went out and contacted property managers, letting them know that turning out lights does make a difference…Now other cities struggle to get their buildings to comply—while we’ve had a skyline that goes completely dark for the last 10 years.”

Beyond the Lights Out program, CBCM has also advised landlords of buildings such as the FBI office and Blue Cross building on how to be friendlier for migrating birds, suggesting such tactics as installing fine netting outside the windows.

“There’s definitely a growing awareness about this, and people are saying yes, it does matter. Ultimately this awareness is going to move us all ahead in making buildings safe for birds.”

Even when the birds can’t be saved, though, the fact that CBCM recovers their bodies helps move other important work forward. Bird-kill research has enabled Field researchers to study patterns within an individual species, such as how broad the white-throated sparrow’s spring and fall migration is, as well as differences in migration timing between the sexes of the same species.

Unfortunately, migrating birds don’t know to fly around city buildings—especially ones that are lit up. A combination of birds’ inability to see glass, their attraction to lit areas that appear safe, and overall fatigue and disorientation all contribute to staggering numbers of bird mortalities each year. Fortunately, there’s always…

Turn off the lights in your home and office at night, especially during spring and fall.

More ways to help: If you see a stunned bird in the downtown area, give CBCM a call. For a list of other preventive measures they suggest, head to our blog.