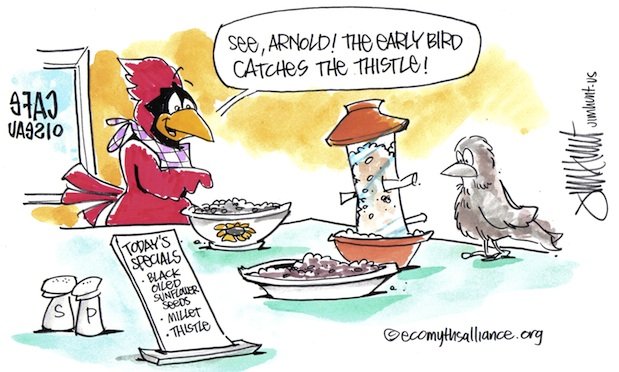 We all know we’re not supposed to feed wild animals (for those who don’t, here’s why)…but do the same rules apply to birds in our backyards? We chatted with a couple of Chicagoland’s foremost ornithologists for their take on using bird feeders, and turns out, they both give them a thumbs up. Read on to find out why it’s A-okay to share the edible love with our feathery friends.

First, let’s get the elephant out of the room: both of our experts, Jim Steffen, senior ecologist at the Chicago Botanic Garden, and Doug Stotz, senior conservation ecologist at the Field Museum, have bird feeders in their own yards. That’s because a.) they’re big-time bird lovers and b.) they agree that the benefits of the practice greatly outweigh its potential negatives.

The clearest benefit is the sheer fact that feeding birds helps people connect with nature. “There are pluses and minuses with bird feeders—the big plus is that it does engage people–those people are more likely to be interested in nature if they have bird feeders,” says Stotz. “I’ve known a lot of birders who have gotten involved starting with feeders, including me.”

Steffen agrees: “Especially in an urban area like this, people have so few opportunities to interact with nature that feeding birds is really a good thing…it gives people a lot of access to nature they might not otherwise have.” That, he says, “more probably outweighs negative aspects of it.”

So it’s a win-win because we get exposure to nature, and birds get free grub, right? Basically. But what about those minuses? Let’s dive in, people.

The Need for Seed: Do Feeders Make Birds Dependent on Us?

One of the reasons it’s counterproductive to feed other wildlife is that it can make it hard for their young to learn how to find their own food sources. But with birds, that’s not really the case. Though they may eat you out of birdhouse and home, the fact that birds enjoy your offerings doesn’t mean they’ll be hard up should you go on vacation, move, or buy a seed blend they hate.

“The birds that come to feeders are able to find other food if the feeders are withdrawn…the birds are not so dependent on that food that losing it will cause an increase in mortality,” explains Stotz.

This very winter is a great example of how birds can make their way with or without us. According to Steffen, people around Chicagoland have been complaining that birds aren’t coming to their feeders. That’s not because there aren’t hungry birds out there—it’s because the warmer temps have kept the snow off the ground, allowing our beaked brethren to find their traditional food sources more easily.

But it’s still free food, right? Which leads us to the next big question…

If You Feed Them, Will They Come (aka Alter Migration Patterns)?

It’s hard to turn down a good freebie. So doesn’t it follow that some birds will just dawdle around a reliable bird feeder in Oak Park, for example, rather than hightail it down south for the winter?

Well, yes, sometimes. Steffen explains that some examples of birds have changed distribution because of feeders. Northern bird species, like pine siskins and crossbills, tend to gear their breeding time based on the amount of food available—rather than on things like light levels. Since thistle feeders have become more available, he says, “a fair amount of these birds have been breeding farther south than they would normally.” But as to the amount of ecological angst this should cause us? “It’s not a ‘problem’…it just shows the effect that bird feeding can have—it can actually change bird distribution patterns,” he explains.

But, as Stotz says, changing agricultural practices have actually played a much bigger part in regional bird migration patterns than feeders. “The shift to mechanized agriculture and the increase in corn acreage has meant a huge food supply for things like ducks, geese, and sandhill cranes that wasn’t here 50 years ago.” But even that, he indicates, is more of a headache for the hunters who are missing them in the Gulf Coast than for the birds themselves. As Stotz puts it, “It may change distribution so they’re in my backyard rather than in my neighbor’s.”

In other words, we shouldn’t worry about our birdhouse wreaking havoc on the migration front. Of course, thinking about migration changes, slight as they may be, might leave some of you native species aficionados out there with another head scratcher…

Invasion of the Habitat Snatchers: Do Feeders Invite Non-native Species?

Do new migration patterns mean new bird species coming in, and new seeds being spread across our land o’ Lincoln? In short, not especially. The most significant non-native species in the area is the house sparrow (also called an English sparrow) which has been around since the 1800s.

But the fact they’ve been here that long doesn’t make them any more popular among ecologists: those seemingly unassuming tiny brown puffballs are actually “very aggressive,” says Stotz, adding that they will take over nests of other species, thereby reducing the nesting success of things like chickadees and woodpeckers. Even worse, Steffen says, house sparrows “compete with our natives and can actually kill them.”

But, as Stotz says, “if no one were feeding them, there would still be house sparrows.” In fact, he says their populations around Chicagoland are actually smaller today than they have been, mostly because of changes in agriculture and industry.

As for the bird seed itself—some of which is non-native—Stotz thinks point of origin is not much of an issue. For example, sunflowers that might grow from the birdseed are eaten by squirrels as soon as they grow, preventing the seeds from spreading. Niger/nyger, (which is sometimes also called thistle seed, even though it’s not the same as North American thistle) is an invasive, but it’s typically treated to be non-germinating. That said, Stotz does explain that planting native species in your yard can be good for everyone, birds included. And a mix of bird feeders and native plants will also help your garden get more native bird action, like finches and juncos, suggests Steffen.

Using a bird feeder will most likely attract other animals like mice, skunks, raccoons, and even the occasional coyote—who might unfortunately be interested not only in the leftover seed or birds themselves, but also in what’s in your garage, basement, or kitchen.

Steffen says smart location is key for keeping birds safe from predators like cats and dogs (high off the ground) and hawks (under tree cover). As for the rest of the scavengers, he points out that keeping the bird feeders and the areas around them clean can help significantly. Stotz agrees, adding that thistle seed can be a good choice for those looking to keep potential thieves at bay, since it’s less appealing to house sparrows.

As for disease, Steffen notes that there’s really only one notable feeder-related problem, an eye disease that’s relegated to finches (not humans, clarifies Steffen). Just keep your feeder clean with bleach and water, and keep food dry, mold-free and separate from other substances that might contaminate it. If you are having an eye disease problem, consider eliminating summer feeding, when disease can spread more easily and birds feed easily on their own.

Myth(s) busted. Unlike other wildlife, it’s a-okay to feed the birds. So go ahead and feed them—especially in the winter when other food sources may be unavailable.

Feed the birds, but just remember to keep the area around your feeder(s) clean. That way, you can attract the birds to your window and keep them healthy at the same time. Then sit back, relax, and watch yourself turn into an expert birder in no time.