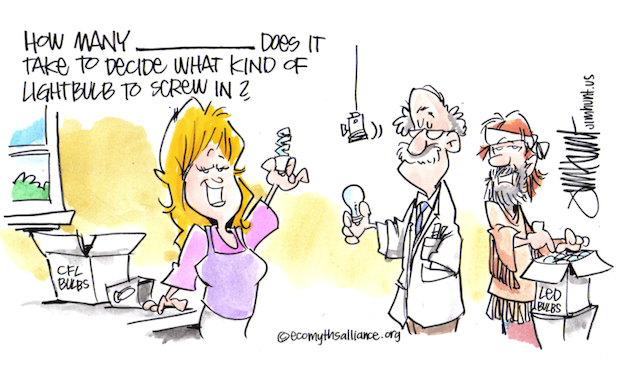 The Bright Stuff: Keeping Your Cool in the Lightbulb Aisle

These days, walking into the lightbulb section at a home goods store is like entering an alternate reality, one filled with strange futuristic shapes and a head-reeling supply of options. How do you navigate the extreme selection without mental overload? Allow us to light the way to bulb decision-making 101, so you can choose lightbulbs that’ll save you money and help you protect mama earth while you’re at it.

First…a little intel from the U.S. Energy Information Administration site, which states that the U.S. uses about 20 percent of the world’s energy. And of that, 40 percent goes to lighting, heating, and cooling our buildings. Seems a tad much for staying lit, right? One clear culprit is the incandescent lightbulb.

Back in Thomas Edison’s day, the incandescent shtick was pretty great. But now, 130-plus years later, it’s frankly no wonder these guys are showing their age. When you consider how frequently we update our other technologies (iPhones are on what version now?), it does seem safe to assume that by now better technologies might exist. Ones that don’t use 90 percent of the electricity they consume to produce heat (which is why they’re hot when you touch them) and only ten percent to do what they’re supposed to do: light up.

And indeed we have. Let the swap-outs begin.

Today’s shopper does have a few choices to consider as they replace their incandescents. Here’s the quick and dirty glossary of basic bulbs, including stats from ComEd and Energy Savers:

According to Energy Star, replacing just one inefficient light bulb with an energy-efficient one in every American home would save at least enough energy to light three million homes for a year and prevent nine billion pounds of greenhouse gas emissions per year, equivalent to taking 800,000 cars off the road per year.

So…that’s great for the country but what about you? Nonprofit group LUMEN has found that lighting accounts for 12 percent of the average household energy bill, and that the average family can save between $50 and $100 a year on the bill just by changing their bulbs.

Those kinds of numbers are just why the Energy Independence and Security Act of 2007 bill stipulated changes to our lightbulb policy. For those of us not up on the exciting world of lightbulb legislation, here’s the deal: the law caps the energy consumption for an approximately 1,600 lumen bulb (about 100 standard incandescent watts) at 72 watts—requiring about 30 percent more efficiency. Contrary to rumor, it won’t actually phase out incandescents. It also requires lightbulb packages to include performance specs on hours, energy used, etc., sorta like food labels.

Are we crazy to think we can phase out something we’ve all relied on for so long? Well, a quick peek around the world says no, as the European Union and Australia each began phasing out inefficient incandescents in 2009. China (the biggest producer of said enviro-villains), the Philippines, and Russia have also passed legislation to phase them out.

In December, Congress decided to delay that portion of the bill until October 2012. But it’s still got manufacturers working on their game. As nonprofit Environment Illinois program director Max Muller says, the law “is a great example of how regulations can drive innovation. In response, manufacturers have already started making much more efficient lightbulbs.”

As the manufacturers adapt to changing legislation and consumer demand, even more versatile eco-friendly options will become available…but we shouldn’t let that scare us. ComEd Senior Program Manager Alicia Forrester breaks it down neatly: halogens are more efficient options than traditional incandescents, but they’re still less efficient than CFLs and LEDs. While LEDs outlast all the others, she explains, they can also be prohibitively pricey and aren’t currently available for all the needs of a typical home.

So for people like us who are looking for a simpler answer, CFLs remain the bulb recommendation of choice—at least while we’re awaiting an expanded offering of LEDs. “For the average customer, CFLs are currently the best energy-saving option with good quality light at a reasonable cost. Each CFL could save you up to $71 in energy costs over its lifetime,” explains Forrester.

You probably know someone who’s passionately pro-incandescent. Maybe you agree. The fact is, both CFL and LED developers have faced their fair share of obstacles on the quest for the perfect bulb. We’re going to go through some common consumer complaints one by one to soothe any frazzled nerves out there.

Myth busted. Swapping out incandescents for energy-efficient lightbulbs saves energy in the long run. It’s true that there’s plenty to think about when buying a lightbulb. But with increasing quality in the energy-efficient offerings, and lots of resources that detail the pros and cons, it is becoming easier to make decisions that work best for our home, wallet, and planet.

In short, replace inefficient incandescents with more efficient options. “The increase in efficiency and cost savings made possible by not using incandescent bulbs is so huge that it doesn’t make any sense to still be using them. Swapping it out is one of the simplest ways to cut pollution,” says Muller.

We recommend using CFLs for now because of their efficiency and versatility, and because the safety concerns are spurious. LEDs may end up being better at some point but the current high price points and lack of selection for indoor residential needs make them less practical options at this time.