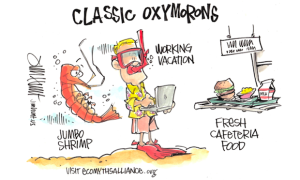 A Fine Mess: The Case for a Healthier School Cafeteria

As the old saying goes, no school lunch is complete without a serving of deep-fried, mechanically-separated meat substance; a processed-cheese-drenched side; and a partially-hydrogenated-oil-stuffed dessert…Though time-honored, such cafeteria staples are exactly why VIPs like Michelle Obama and Jamie Oliver have made it a mission to revolutionize school lunch programs.

The big idea is that integrating school gardens and increasing the use of whole, locally sourced, and organic ingredients will enable students to eat healthier, as well as to better understand food systems. Indeed, a sea change is afoot in school systems across the country, and it’s enough to support the position that serving fresh food in cafeterias is more than a pipe dream—it’s a necessity.

The problem, according to Eco-Schools USA, a National Wildlife Federation-run group, is that most of today’s 30 million daily cafeteria lunches are filled with poor quality, highly processed foods that contribute to childhood obesity, diabetes, and reduced attention spans. Part and parcel of the issue, too, is that many kids have little understanding of how food is grown, harvested, and transported.

The antidote: to bring fresh, healthy food to school, via gardening and local farms—and to help kids and parents connect the dots between food and health, communities, and the environment.

Elizabeth Soper, associate director of Eco-Schools USA, says it’s all about teaching kids the relationship between what they’re growing in the school garden, eating in the cafeteria, and learning in the classroom. For example, growing a school garden helps kids see ecology in action, while discussing nutritional value and waste provides a learning opportunity about the environmental impact of food systems.

Sounds good in theory, right? But to many, the idea of swapping out cheap, processed foods for fresh ones simply sounds time-consuming and expensive.

A Dull Roar of Budget Concerns

It’s no secret that many school districts have budgetary woes. So why would we ask a cash-strapped system to up the ante in its cafeteria food? Because the payoff is worth it—and the actual bill not as prohibitive as you might think.

For starters, many nonprofit groups and federal agencies offer grants to support healthy schools initiatives. In Chicago Public Schools, for example, a USDA grant supports the district’s goal of procuring 35 percent of its produce from within 250 miles, according to Drew Thomas, school garden coordinator for CPS.

And in Denver, the Garden to Cafeteria program has established edible gardens and related education programs at dozens of DPS elementary schools, thanks to support from community partners.

Let’s Move Salad Bars to Schools, which has funded and awarded salad bars to 6,000 schools in three years, reports that the daily cost of a salad bar averages out across all reimbursable elementary school meal participants at $0.16-0.26 per meal—the same price as an apple. The benefit of offering a whole salad bar’s worth of potentially likeable options as opposed to a single fruit item is clear: kids might actually eat some of it.

In addition to funding support, Soper points out another interesting possibility: “Some schools have found that when they work with local farmers, they’re sometimes able to negotiate costs. If the farmer knows they have a set amount of produce they know will sell the school, they may be able to provide better prices.”

The bottom line is that while there is no such thing as a free lunch, healthy or not, there are plenty of budget-minded ways to increase healthy food procurement in schools.

Perhaps the most budget-friendly local food procurement program is to grow the food right there on school grounds. But how easy is it to actually incorporate garden-grown goodies into cafeteria fare in a huge district?

The Chicago Public School system is the third largest in the country, posing, as Thomas admits, a bit of a challenge in terms of food service liability issues. His office’s strategic solution: to develop a Food Safety Manual that’s agreeable to all parties, which catalogs due diligence to ensure food safety best practices in school gardens.

The manual covers gardening basics, such as soil testing, as well as cleaning tactics, like sanitizing buckets and scissors used to harvest. It also covers what Thomas calls “less intuitive” protocol, such as not washing produce in the garden to protect it from pathogens that can grow when produce is left sitting in water over time. Instead, teachers and students brush off produce to get dirt and debris off, then kitchen staff, who are certified by the department of public health, wash it inside on the day it is served. Even with detailed protocol like that, he says, the time it takes to get from the garden to cafeteria is just about 30 minutes.

“A lot of people assume with an institution like CPS that growing food is going to be a big onerous task. But it is a lot more doable than they would think,” says Thomas, who estimates that about 150 schools have edible gardens eligible for the district’s new Eat What You Grow program. “Our contract with our food service providers is the largest contract in the country, so if we can do it at this level at an institution this large, then I think anyone can do it.”

Before any major new visions can become a reality, the administration and cafeteria staff need to get on board—and they may not come easy.

Administrators may be wary of a garden becoming an eyesore during the summer. Thomas’ tip on that point is to volunteer to help water or otherwise maintain the garden over the summer. Or consider the lead of the Burlington School Food Project, which supports this Vermont district’s 11 public schools. Here, according to Soper, students get paid internships to come in during the summer and learn how to maintain the farm, thereby learning skills that can be used not only at home but also potentially for a career.

Inside cafeteria doors, many workers and managers are simply not trained in the process of cooking fresh foods, notes Soper. “There’s no denying that it’s much easier to open a tray of nuggets, throw them in the oven, and put them on a tray,” she adds. An effective solution, she says is to bring in chefs, who can inspire cafeteria teams by teaching them to whip up new recipes with fresh foods.

In some cases, healthy new lunches have proven wildly successful.

Take Riverside, California, for one, where the school district has successfully implemented locally-sourced farm-fresh salad bars into 29 out of 30 of its schools. Now, according to the USDA, 33 percent of the students there choose salad bar for lunch.

Unfortunately, as you can probably guess, Riverside isn’t exactly the norm—yet. As CBS recently reported, some schools have recently dropped out of the USDA’s healthy-food subsidies program because they say kids just aren’t eating the new food.

“Kids like tasty food and food that is high in fat and sugar is very tasty. It’s so frustrating to see schools try their best, say by giving each kid an apple, and then see all the whole apples in the trash,” comments Judy Bramble, PhD, environmental science department chair at DePaul University.

The missing link, she suspects, is the kids’ own connection to the new food. “I’ve seen kids who reject vegetables eat them readily when they’ve grown them and picked them from a garden and cooked them themselves, or even eat them raw off the vine.”

One district that’s really working to get kids involved in the process is Los Angeles Unified School District, which serves 650,000 meals daily. In addition to ratcheting up its ratio of fresh to processed food, this year the district is incorporating student-created recipes into its menu. 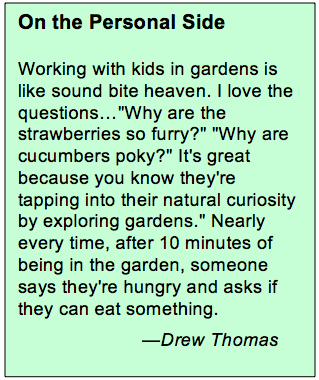 This engagement can extend from the garden to the cafeteria to the classroom. Both Thomas and Soper cite the example of Chicago’s Academy for Global Citizenship, where every class is actively involved in the garden, offering teaching opportunities on topics from nutrition and the environment to water issues.

There’s also the sheer value of learning new food. “Many students have never even seen certain vegetables, like a summer squash, and have no idea it’s something you actually eat,” says Soper. “Most of their vegetables come frozen out of the bag or can, but research we’ve seen shows that if they are actively engaged in planting and harvesting something, then they are much more apt to try it.”

Another trick up Thomas’ sleeve is to plant things the kids are actually into. In his district, lots of kids like spicy foods, so he suggests hot peppers and radishes.

“There’s often a transition period in these transformations of processed to more natural, local, and organic food,” explains Soper. “It may take a month for kids to decide this is what is good for them and tastes good.” She advises taking small steps to change, such as offering taste tests of fresh garden foods versus overnight menu overhaul.

Though the big goals may take some time, the benefits of every small step along the way are together huge. “What’s really great is when you see the students bring these lessons back home, encourage families to go to farmers markets, grow their own food, and make these lifestyle changes together,” says Thomas.

Bonus to parents: Kids who learn to appreciate healthy food at school may just come home more willing to try it at the dinner table, too. Children who happily eat whatever veggies you give ’em? For many families, that may be the biggest oxymoron of ’em all.

Serving fresh cafeteria food is not only possible, it’s practical and beneficial, too. Though most school districts haven’t yet jumped on the bandwagon, there are many resources for schools looking to increase their healthy selections. 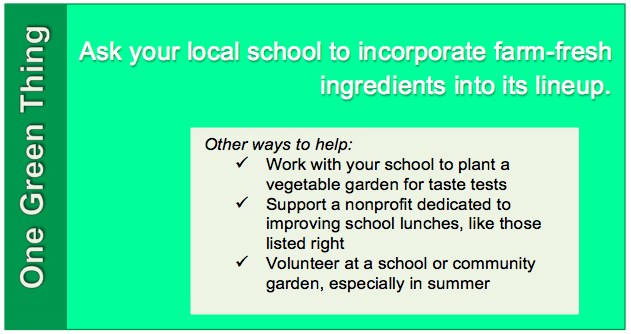 If a quarter of our schools follow CPS’ example and incorporate at least 35 percent of local and garden-grown fresh food into their cafeteria lineup, 10.5 million children per day will eat healthier cafeteria lunches. This increase can help us put a dent in the childhood obesity epidemic—and teach kids the value of healthy foods in terms of nutrition, community, and environment.