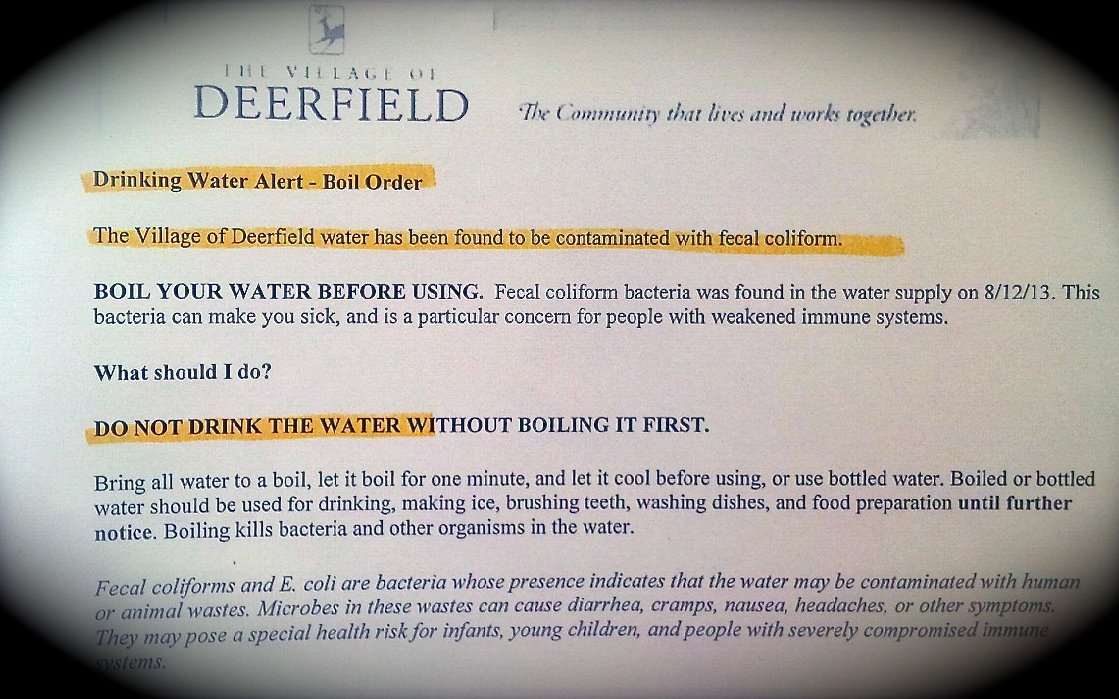 This “out of service” notice was posted above a restroom sink in Deerfield, Illinois – highlights included. Not a good sign…

It was a fairly normal day in Deerfield, Illinois. The sun was shining, the birds were chirping, and I was on my way out of the Deerfield Public Library. With my water bottle in hand, I decided to make a pit stop in the ladies room. As I was washing my hands, I noticed a sign above the sink that read: “Drinking Water Alert – Boil Order.” It was a notice from the Village of Deerfield. On August 12, 2020, fecal coliform bacteria was found in the water supply.

Dozens of questions ran through my head. Did sewage contaminate the water? Is it okay that I just washed my hands in the sink? At that moment my stomach sank—I had already drunk nearly an entire bottle of tap water. Gross! I continued to read and discovered that this bacteria can make you sick. It said that until further notice, only boiled or bottled water should be used for drinking, making ice, washing dishes, and food preparation.

As an International Studies student at the University of Wisconsin-Madison, I have traveled to places with water crises before. I spent a large amount of time in the Israeli desert (the Negev Desert makes up two thirds of the country) where there is a chronic water shortage issue. Water has always been a political concern in the Middle East. Wars have even been fought to ensure that aquifers and other water sources straddle country borders. In addition to years of drought, the population and standard of living have also been on the rise. There is a fear that there won’t be enough water to supply municipal and household requirements, and the agricultural sector has also suffered.

In Israel and the surrounding countries, conserving water isn’t a choice, it’s a necessity! Children are taught at a very young age to take short showers and not leave the sink water running. All toilets and faucets are low-flow water savers. Families only plant drought resistant vegetation and water them at night. Farmers typically use low-volume irrigation systems such as drip hoses or micro-sprinklers to save water. Since the Sea of Galilee is the state’s only freshwater source, Israel has made groundbreaking technology advances in recycling, harvesting, conserving water, as well as desalinizing sea water.

After living in Israel for a year, I was used to being in a situation where often only bottled water was accessible. But here? In Deerfield? In my hometown it was going to take some getting used to.

For the next two days my family and I worked at adjusting to a new routine. We had four giant pots of pre-boiled water in the kitchen in which to make our food and wash our dishes. That meant not even rinsing an apple in the sink. We drank and brushed our teeth with store-bought bottled water. All the community grocery stores ran out of water as fast as you could say “don’t drink the poopy water,” and restaurants were having trouble serving food.

Those few days of being deprived of the water I normally take for granted definitely gave me a new perspective. Think about how much of your life revolves around water usage, from the moment you wake up until the moment you go to sleep. Without accessible water, life would be way more complicated.

While it is important to appreciate the clean water that is constantly available to us, it is just as important to ensure future safety by keeping the environment as clean as can be and being responsible about our water intake. Feeling inspired? Try one (or all!) of Green Up Deerfield’s smart water-saving tips.