In the game of life, hibernation is like a Get Out of Jail Free! card for groundhogs and other marmots. They get to sleep through all the holiday drama, groggily check their shadow in February, then set the alarm for balmier days. So, when global warming makes for severe weather and sporadic food supply, they should be able to hit snooze straight through to spring, right?

Ah, if only it could be that simple. From extreme drought in the western mountain regions to warmer, shorter winters in the Midwest, climate change-related weather may threaten future marmot survival in different regions—in large part because of the potential havoc that changing weather patterns can wreak on hibernation, reproduction, and vegetation trends.

To learn more about how climate change could affect the two most prominent and resilient species of marmots in North America—groundhogs and yellow-bellied marmots—we caught up with Steven Sullivan, senior curator of urban ecology at the Peggy Notebaert Nature Museum/intrepid leader of Project Squirrel citizen science program, and Daniel Blumstein, chair of the Department of Ecology & Evolutionary Biology at UCLA and head of the Rocky Mountain Biological Lab Marmot Project (RMBL).

How to Throw a Marmot Slumber Party (aka Hibernation 101)

Wait, what? You’re not sure what a marmot is?

Groundhogs may get all the fame (thanks, Punxsutawney Phil), but they are actually part of the marmot genus—15 species of large rodents in the squirrel family.

Generally speaking, marmots live in burrows, hibernate in winter, and are highly social and communicative. In North America, the two most prevalent species are the lowland-dwelling groundhog, which casts tiny toothy shadows across the country, and is the only marmot species that lives east of the Mississippi River, and the yellow-bellied marmot, which teases hikers in the mountain west.

Groundhogs can hide completely from the world for eight solid months, which is essential to their survival during winter’s food scarcity, explains Sullivan. During these “amazing physiological adaptations,” their body temperatures drop to almost freezing, their heart rates fall from 70-80 to four beats per minute, and they take only one breath every five minutes. If you dig up a hibernating groundhog, he adds, it’ll feel, look, and sound like an ice cube.

Yellow-bellied marmots are also one of the most efficient hibernators known, points out Blumstein. They’re about the size of a cat, and weigh 11-12 pounds when they hit the hay for hibernation, where they burn a single gram of fat a day in deep torpor (science speak for extreme inactivity).

Though scientists aren’t sure of the exact recipe for a marmot wake-up call, Blumstein says they’re “very susceptible” to changes in April air temperatures. Those changes probably help rouse the male marmots, who tend to wake up before females, who they then go try to dig up through up to 6.5 feet of snow to make spring babies (how’s that for romance?). Blumstein has even seen them occasionally bring dried plants from other snow-covered burrows to help awaken their snoring mates.

Hibernation is a brilliant way for marmots of all stripes to conserve energy during the winter—but waking up requires whatever’s left. As part of the groundhog’s torpor, the digestive process also essentially grinds to a halt. So even though they’re basically starving when they emerge, sleepy-eyed and weak-kneed, they still need to take at least a week to get their intestines and gut back up to speed.

Now that we’ve got the basics down, let’s tackle the toughie of how global warming could affect hibernating marmots.

First of all, timing matters. If marmots wake up earlier than spring vegetation growth occurs, they may have to take greater risks to get food—which a.) they may not have enough energy to do, and/or b.) could give predators unusually easy access to them.

A case study from the Rocky Mountain Biological Lab, located around 9,400 feet above sea level in sub-alpine Colorado, demonstrates a clear link between warming trends and early emergence. Here, according to Blumstein, the snow has been melting on average about a day earlier each year over the last 30-50 years. Now marmots are coming out of hibernation a month earlier than they used to, when there are fewer plants available for them to eat, and melting snowpack coupled with hunger-induced daredevilry make marmots easy prey. Meanwhile, heat and drought sometimes dries out summer vegetation, which makes it tougher to fill up their fat reserves for the next winter.

In some years, warmer weather may seem like a boon for marmots, as it can make for longer foraging time. In fact, over the first decade of the 2000s, the warmer weather actually triggered an explosion in population. But by 2011, the population crashed when there was an exceptionally long winter and late snow melt.

The thing is, as we can also see in groundhogs, the earlier they wake up and the longer the growing season, the more individuals you might see survive the season. It’s what comes next that’s problematic, explains Sullivan.

According to a 2010 study by RMBL founder Kenneth Armitage, average marmot birth growth was about 0.56 individuals per family per year between 1976-2001. But with global warming spurring earlier emergence and longer growing seasons, that figure soared to 14.2 marmots per year from 2001-2008.

Similar population explosion scenarios applied more broadly could potentially cause too much competition for food, resulting in mass starvation. Or, if there are so many marmots that they eat more than their species’ share, they would impact other herbivores who also need that food, in turn impacting carnivores. In other words, even if climate change actually helps marmots do well in one year, such crazy oscillations in populations could ultimately trigger a chain reaction across the food chain—a trophic cascade, as le scientiste would say.

Sounding the Alarm on Marmot Wellbeing

Never seen a yellow-bellied marmot? Still shaking your fist at the groundhogs who ate your veggie garden last year? Whether you see them as mythical furballs or garden pests, marmots can teach us a’plenty, and, as an indicator species, they also give us clues into the overall well-being of the ecosystem.

To begin with, they can inform a lot of human medical research, agree both Blumstein and Sullivan. For example, Blumstein explains, the scientific research of yellow-bellied marmot androgenization could help us understand the significance of human hormone-disrupting chemicals in common household products.

And, as Sullivan points out, by studying marmot hibernation we can advance our knowledge of medically induced comas, and potentially learn how to shut humans down during space travel so that when they wake up upon reaching some far distant planet they can be functional and healthy. Cool stuff, huh?

They also have direct benefit in our backyards (yes, even the ones they muck up). “We perceive them as pests because they dig holes and mess up our gardens,” says Sullivan. “But they have ecological benefits, too.” They mix up vegetation, help prevent flooding, and suppress weed populations. Other animals rely on them, too, as part of the whole network. For example, Blumstein says, other animals like deer respond to marmots’ alarm cries.

In other words, when climate change impacts one species, it can have a trickle-down effect to all the other critters around, too. Love ’em or loathe ’em, the more we can do to curb climate change, the better off the world’s marmots—and their surrounding ecosystems—will be.

Global warming does mean a thing to marmots. Although climate change may actually bring temporary benefits to resilient, broad-ranging species like groundhogs and yellow-bellied marmots—any benefits would be soon offset by drought, shifts in food supply, and habitat loss. The effects may be hard to perceive in the present, but it’s still a major wake up call to encourage us to address climate change now.

Ready, Set, Do One Green Thing: 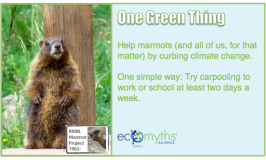