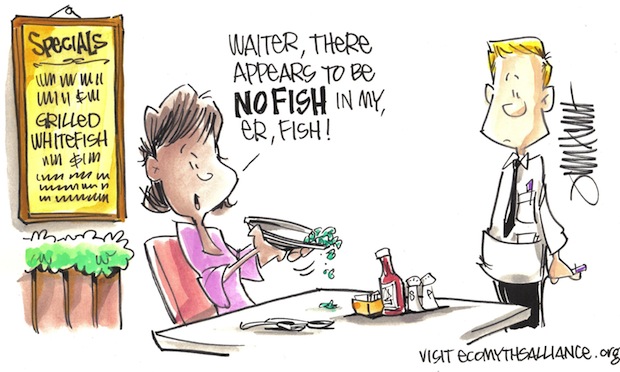 Changing Perspective for a Changing Climate

There’s something fishy happening in our rivers, streams, and lakes. Fish species that Americans have enjoyed for generations are experiencing population declines. Water temps are rising, while water levels are, well, doing the opposite. Freshwater ecosystems are changing—and not for the better. Indeed, global warming is at hand…

What, you didn’t think we could do doom and gloom?

Okay, you were right. Let’s back up to the good news: New research out of Stanford found that three quarters of Americans agree that climate is changing, and at least half want to take action. How exactly is that good, you ask? Well, it’s a lot easier to make things better when more people can agree those “things” exist.

So we’ve chosen to celebrate the growing consensus that global warming is a thing by kicking off a series investigating the many ways it affects everyone who’s anyone (which is basically, um, everyone). 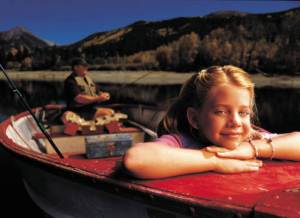 Good ol’ fashioned fun like this could be a lot less fun with global warming. (Recreational Boating & Fishing Foundation)

With a National Wildlife Federation (NWF) report on climate change and freshwater fish hot off the presses, we thought we’d tackle this angle first. From the economic impact of a threatened freshwater fish industry to the cultural loss of favorite fishing traditions, we’re about to make this personal—’cause it is.

Reeling in the Facts

For many people, fishing is a cherished tradition, with regular sojourns to favorite fishing holes providing community, connection to nature, and ritual…not to mention dinner. For others, the freshwater angling business is also an important economic pursuit—to the tune of $26 billion annually in expenditures by 27 million people, according to the NWF report. Somewhere in between, there are many who simply appreciate knowing our lakes and rivers are teeming with the fish we’ve grown up hearing about, from perch and whitefish to salmon and trout.

Unfortunately, freshwater fish are feeling the heat of global warming. We caught up with National Wildlife Federation spokesperson Frank Szollosi, M.S., and Alliance for the Great Lakes coastal program manager Angela Larsen, M.U.P.P., for some insights into the key problems, as well as the things we can do to help.

We’ll just come right out and say it: Water temperature matters. When fish have to swim around in temperatures higher than the optimal thresholds for their species, they experience declines in growth, reproductive, and overall survival rates, as well as become more susceptible to pollution and disease, according to NWF’s report.

Cold-water species like this cutthroat trout are expected to lose an additional 58 percent of their current habitat, according to NWF. (Nevada Fish & Wildlife Office, USFWS)

And a diverse body of research points to an increase in warming waters. For example, a 2010 study of 40 major U.S. streams and rivers found that half showed “statistically significant” warming trends, while a study on freshwater fisheries projected that cold-water habitat could shrink by as much as 50 percent by the end of this century.

Striking examples? Check and check: NWF researchers found that Virginia’s state fish, the cold-water brook trout, stands to be out of habitat in the state by mid-century, thanks to warmer and drier stream conditions. And in Yellowstone National Park’s Madison River in Montana, the average annual number of “thermally stressful” days for cutthroat trout has almost tripled since the ’80s. Those trout matter not just to the 42 other species that depend on them for food, but also to the regional economy, as fishery management experts estimate that $67.5-$385 million comes in from angling within the park.

Shorter, warmer winters are resulting in a major shift in water flow and levels. That’s because many rivers and streams depend on melting snowpack as a water source—particularly on the West Coast, where snowpack is melting one to four weeks earlier than it did 65 years ago, a trend expected to rise to another two to four weeks earlier within the next century. 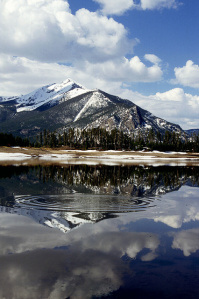 Visual evidence of the importance of snowmelt: here, snowmelt runoff fills a fish-friendly reservoir in the Colorado Rockies. (USDA/Scott Bauer)

What difference does a day, er, month make, you ask? Earlier snowmelt—and less of it—changes stream flow, driving peaks earlier in the season and reducing summer water levels. That impacts reproductive success for fish whose ability to navigate depends on pulses in the stream flow. On the other hand, too much melting-snow-induced rushing water too soon in the season can also destroy the gravel beds where salmon lay their eggs.

Warmer temps also mean less ice cover in lakes, ponds, and rivers. Szollosi explains that with less ice to reflect the sun in winter, water absorbs more of the sun’s heat, making for warmer water that evaporates more easily. In other words, not only is water warmer, but there’s less of it, too.

And yes, the recent drops in Great Lakes water levels are indeed a big deal, according to Larsen and the Alliance for the Great Lakes. She explains that most of the low water levels we’ve seen this past decade can be attributed to greater evaporation. “Lower lake levels puts stress on our coastal areas, and will continue to cost industry and our communities money. These lower lake levels combined with longer periods of drought and altered hydrologic cycles means less recharge of the Great Lakes water supply and more water loss.”

Of course, less water means less habitat for fish, which brings us to…

With 147 freshwater fish species already listed as endangered or threatened, the risks are already serious in terms of invasive species, pollution, and disease. Unfortunately, global warming is a contributing factor in all of these areas. 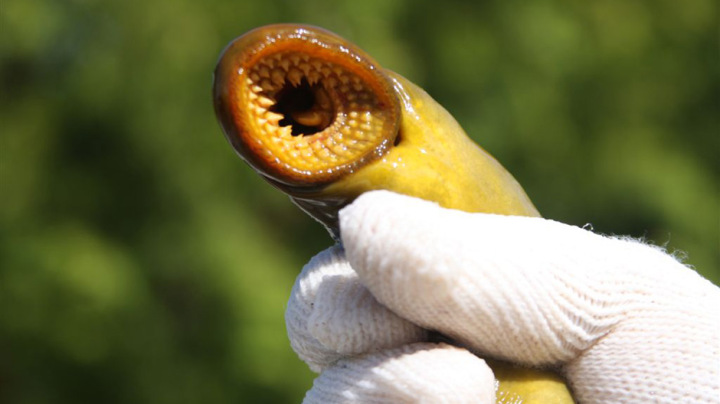 These ominous circular rows of teeth belong to the infamous sea lamprey, devastating the Great Lakes since 1921. (USFWS)

With so many pieces, it can be hard to picture the level of impact. “In terms of clues,” says Larsen, “there is little doubt that climate disruption is threatening the Great Lakes and the communities that depend on them. We are already seeing these impacts, and we have every reason to anticipate that they will only increase in severity in the future.”

From Lake Michigan to the Chesapeake to the streams of the Sierra Nevadas, climate change is a clear and present danger to our nation’s freshwater fish.

Szollosi puts it this way: “If we don’t take action to reduce climate risks, Michigan temperatures are going to be like Arkansas and North Texas, and instead of catching prize native species, we’ll be catching Asian carp. Something is going to be lost if we allow that to happen and turn away from challenge.”

Angling for a Better Outcome

Fortunately there are some very real ways we can help cut the carbon emissions that contribute to global warming…and ultimately help protect our freshwater fish: