Remember those wonderful, lazy days fishing at the lake with your grandfather? My Grandpa and I would bait our hooks, reel in a couple of good sized perch, and bring them back for Grandma Evelyn to cook. Those days are under threat now, and not just because of our obsession with Twitter and Angry Birds Star Wars.

We’ve all heard about many changes occurring due to global warming, like melting glaciers and crazy weather. But did you know it is also affecting freshwater fish? Jerome and I talked with National Wildlife Federation spokesperson Frank Szollosi, M.S., to find out why some of our favorite fish species are declining or under threat. 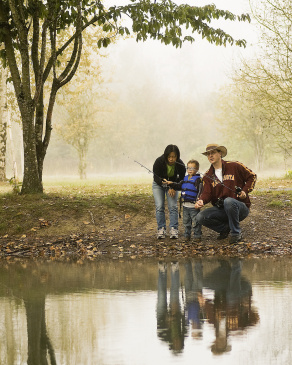 Fishing has long been an important tradition for many families – and I’d like to keep it that way. (Oregon Department of Fish and Wildlife)

Recreational fishing is a big industry with $26 billion spent by consumers every year, according to a newly released study on freshwater fish by the National Wildlife Federation. Climate change is warming the water to the point that cold-water fish species are not only driven north, but are dying. Frank told us that fish species are grouped into three different types of species: cold-water, cool-water, and warm-water fish. Cold-water fish become very vulnerable with increasing temperatures, making them more susceptible to pollution, parasites, and disease, according to the study. Species that are unable to migrate to colder, more hospitable waters elsewhere often are also unable to reproduce in their native habitat and the populations die out.

Warmer air temperatures causes water temperature to increase, Frank says. In addition, warm air causes greater evaporation and can lower water levels and result in warmer water. Pollution is also compounding the impact of warming waters. In the Great Lakes for instance, the western basin of Lake Erie has a significant problem with enormous algae blooms, which deplete oxygen from the water, making the water uninhabitable for fish.

Changing climate will continue to accelerate unless we cut our carbon emissions. Frank reminded us that each of us has the ability to make small daily choices that add up. Even easy energy-efficient changes at home can make a difference, like lowering the thermostat a few degrees in the winter and switching out some of your light bulbs for CFLs or LEDs. It may not seem like much, but when thousands of us cut our energy usage, together we emit a lot less global-warming producing carbon into the atmosphere. Frank gave us hope, but also made it clear that we all need to play our part to ensure we don’t lose the fish species in the wild.

To learn more about how global warming impacts freshwater fish, read the myth and click play on the podcast above.

—As part of our partnership with Worldview, this content may also appear on Chicago Public Media.