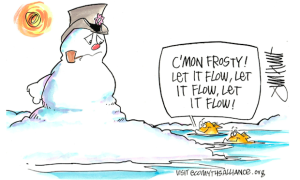 Snow. It may inspire a childlike enthusiasm in many of us around the holidays, but come January, the frigid stuff starts to look a lot less like magic, and a lot more like a major pain in the, um, ice. From shovel-shirking neighbors and traffic delays to excessive wardrobe requirements, it’s no wonder abundant snowfall has gotten a bad rap for people who can’t just drop everything and play in it.

So in honor of stranded air passengers and shivering pedestrians everywhere, we decided to do a PSA on one important reason to love snow: its importance to the water supply. For an expert take on the topic, we turned to water resource planner Timothy Loftus, PhD, of the Chicago Metropolitan Agency for Planning (CMAP), which has planning responsibilities for more than 8 million people in the Chicago region—a constituency that clearly gets its fair share of snowfall.

Not an Inconvenient Truth

A mini-refresher on elementary school science reminds us that snow plays a big part in the water cycle, supporting water levels and water quality either by falling directly on bodies of surface water or melting as run-off into streams and rivers. (Here’s a handy visual reminder from the USGS).

The degree of importance snow plays to your particular water supply does vary, explains Loftus. It all depends on local climate and source water. Communities that rely on surface water sources like rivers, lakes, reservoirs, and streams benefit most directly from snowfall and snowmelt. One of the most striking examples is the dry Western U.S. states, which depend on the Colorado River for water supply—which in turn relies on the abundant snowmelt that runs down from the Rocky Mountains.

Snowfall also matters to the 80 percent of Chicagolanders who depend on surface water for drinking water. In the Chicago region, snowfall accounts for close to 10 percent of the annual precipitation, much of which runs off into local streams and is diverted away from Lake Michigan. Snow or rain falling directly on our Great Lake is important  considering Lake Michigan levels have recently been hovering at historic lows.

Meanwhile, snowfall makes less of a dent in communities whose water supply comes from groundwater held in aquifers. Since, as you might guess, snow typically falls on frozen ground, most of it melts and runs off into the nearest stream rather than being absorbed into the deep rock layers that make up groundwater aquifers. Still, CMAP research shows that the region’s groundwater resources are being depleted faster than they’re being replenished, and are expected to be compromised at current rates by mid-century. This could mean that in the Chicago region, more people may need to turn to surface water for supply, making snowfall an even bigger player in helping fulfill pretty much everyone’s water needs.

Rather Be Singin’ in the Rain?

Why care more about snow than rain? We’re paying tribute here to snow specifically because of this: In addition to an increase in intense storms as some research has found, a global warming-related trend is that more precipitation is falling as heavy rain rather than snow in some parts of the world. This would be, to put it gently, not ideal for communities that depend on rivers or reservoirs for their water supply. Rain runs off much more quickly than snow, which can pose a problem for water quality in areas like Chicago, where heavy rains can overwhelm sewer systems and lead to Combined Sewer Overflows (CSOs), explains Loftus.

Excess rain and reduced snowfall can also mean higher highs and lower lows in water levels in areas like the Rocky Mountains, he adds. A few instances of heavy rain cannot create the same sustained levels that snow can. Abundant snow in winter, along with a gradual warming through spring, means a higher level of flow over a longer period of time than with periodic rainfall. In the end it’s a way of “banking” much-needed precipitation.

In other words…snow is actually quite convenient when you think of it in terms of our water supply. But with climate change leading to reduced snow in many areas, a word to the wise is that we can support a more snow-friendly environment by reducing carbon emissions.

Salt in the Wound

There really is no denying that snow can be a dangerous hassle in terms of road safety. Unfortunately the salt we use to defend against slipperiness winds up in our sewers, contributing chloride to surface water or the wastewater treatment plant, which doesn’t remove chloride, says Loftus. More than surface water is affected. Research shows a “clear and persistent trend” in every Chicago county towards higher chloride levels in the shallow groundwater, which he warns will eventually become “problematic and super expensive to remediate.”

Instead of salting private driveways and sidewalks, Loftus recommends providing traction by using a small amount of sand, which doesn’t damage water, soil, or plants.

Snow is not just an inconvenience to muddle through—it is essential to maintaining water levels and water quality, as is the way we treat it. 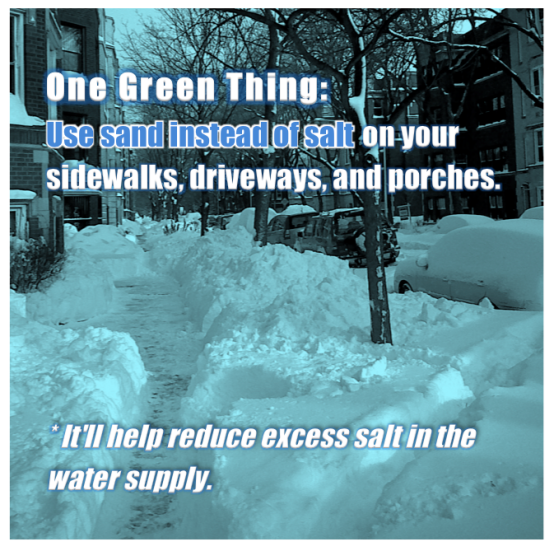