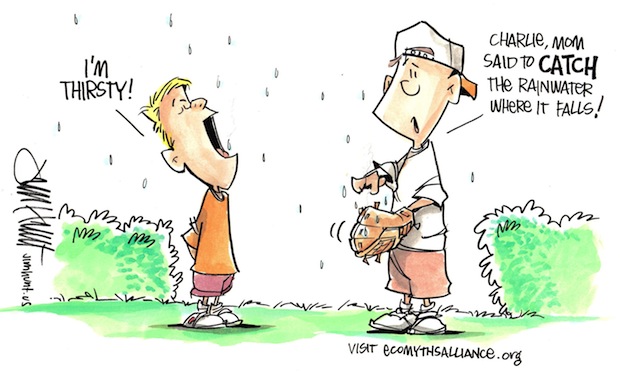 Pssst: This is part 2 of our epic water supply myth. Read Part 1 for the full picture.

How can we smartly invest in a more sustainable water supply? Let us count the economical ways…that investing in water transfers and incentives can make a world of difference.

Confused by why a transfer is desirable, when diverting sounds so ominous? We were too. For those also not up on their water policy lingo, water transfers are different from diversions in that they don’t move water out of a basin; they change how it’s used within the basin. So, as Hunt explains, expediting transfers and exchanges between water rights owners could result in less waste. Unfortunately California’s current “use it or lose it” doctrine means there’s no incentive for owners to transfer water—even if they have no use for it.

While there is room for improvement in Hunt’s home state policies, there has been some good progress on the transfer front. In fact, Beckwith considers California “a poster child for how well transfers can work.”

With 80 percent of the water being used for agriculture, he explains, the conversations about public versus industry use may be tough, but they are happening. At least one promising policy aims to improve collaboration between cities and agriculture; he points to the Palo Verde Irrigation District and the Southern California Water District agreement on rotational fallowing, which makes it mutually beneficial for farmers to transfer the water they don’t use to cities.

“We need to be smarter about how we use the water we have,” states Hunt, who adds an optimistic spin to the current dry state of affairs.

“Droughts have usually been a time for innovation, because it inspires both industry and government to increase investment in water conservation and reuse. When people say, ‘we need more dams, or, oh my gosh, the sky is falling, we can’t keep up with population growth,’ they may not be taking into account that people acting on their own and the incentives for businesses and municipalities to conserve really works—and it’s game-changing.”

That spirit of innovation has not gone unnoticed in other regions, at least in Teutsch’s eyes. “The West has been a really good driver in terms of innovation and technology, and of understanding how water can be reused,” he says, “which is a much less wasteful approach to managing a resource than one where we use it once and flush.”

Teutsch believes government incentives would encourage efforts like increased water recycling across the region. “Some states have incentives, but most are voluntary programs that have not done enough,” he comments. His ideas: “The state can help incentivize with things like tax incentives from a state revolving fund or support for local bonding, while local municipalities can enforce conservation by doing things like water audits.”

Incentives can also make a difference on the individual level. As a former Oregonian, Hunt remembers saving big on his bills in Portland, where residents could get credit for planting trees and disconnecting downspouts—both which help rainwater absorb into the soil where it falls rather than letting it run off into sewers without ever being used. Such incentives are a win-win, in Hunt’s mind, because efforts such as these to manage stormwater not only help conserve water, they also help increase green space.

Ultimately, Hunt believes our best bet for solving water supply issues is to identify new ways to more efficiently use the water we have. And often times, this comes down to restoring landscape for better stormwater management. In the Midwest, this could mean restoring wetlands, which act as natural sponges, while in the West, it might mean increasing natural water storage by restoring prairies and meadows around headlands, which soak up melting snow and hold it in headwaters for later release.

There is plenty of scientific evidence to suggest these practices work, and Hunt’s example is a tangible one. “In the Indian Valley, it’s easy to measure the effects of restoration; the groundwater table comes up and the period of runoff now runs later in the season. We can see that meadow restoration increases downstream water supplies in the summertime, and more generally it’s an example of how stormwater and watershed management works.”

States could also do better with incentivizing conservation and stormwater management efforts—because they actually work.

It seems like all we need to know about water resource management we learned in Kindergarten—just consider the power of simply coming together for thoughtful debate, and fostering a can-do environment in the conversation. Consider: If cities and states could work together to modernize infrastructure, less water could be wasted in leaky old pipes or unprotected channels that are prone to evaporation. If fisheries and farmers could dispassionately discuss the pros and cons of various strategies, they could come up with solutions that are more mutually beneficial.

While Western states may inspire water-rich states with their innovative water-saving strategies, the Great Lakes region, for its part, has some inspiration to share. With eight states between the U.S. and Canada sharing governance of the Great Lakes waters, the Great Lakes-St. Lawrence River Basin Water Resources Compact is a serious tribute to the collaborative spirit.

Inspired to contact your rep? Great idea. But don’t forget to bring it home.

5 Tips for Authoring a Better Plan

We’ve established that supporting better policy is important. But what about when you’re just living your own life?

1.) Save water inside your home: From swapping in an efficient showerhead to repairing leaky faucets, saving water in the household can be an easy way to make a difference. The best indoor water-saver, says Beckwith, is to replace an old toilet, which uses the most water of any fixture.

Don’t think it adds up? Hunt says that in Seattle, city planners in 1980 projected that water use would be off the charts in the ‘90s and 2000s. The reality was that the amount actually used was way below what anyone predicted. “The reason was that people were doing all these little things to conserve at home.”

Similarly, in Illinois, Teutsch says the state “massively exceeded limits in the ’80s during suburban growth, but now, even though there are more users and communities than ever using water, communities are actually using less water because of conservation efforts.”

Another cool way to save water? Use less energy. In 2005, thermoelectricity production accounted for 41 percent of freshwater withdrawals, according to the USGS.

2.)Use it where it falls: Repeat after us: rain barrels, native plants, and diverting downspouts, oh my. “When it’s raining and you see water that should be soaking into the ground but is not,” advises Hunt, “do something about it. For me, I made a little trench in my driveway to make sure the water flows into the ground rather down to the road.” Take a walk around your home and neighborhood during a rainstorm and see where water is being wasted and not being soaked in. With a shovel and a couple of minutes, you can dig a little canal so the water doesn’t just run down a driveway or alley, but instead into a garden or other little patch of green.

3.) Volunteer somewhere, anywhere, green: Helping restore green space, whether it’s a meadow, a wetland, or a small urban park can make a big difference in cutting stormwater waste. It’s easy to see the impact, if you look. “When you walk out in a meadow, you can see the rain fall, see it soak in, and then see it come back out via local streams later in the season,” says Hunt.

4.) Think outside the map: Conservation matters no matter where you live. “Water-rich regions like the Great Lakes must understand that we have a stewardship responsibility. It behooves us to act responsibly and conservation-minded,” says Teutsch, who indicates that conservation strategies will both protect the water supply for the long term as well as simply demonstrate good stewardship.

5.) Recalibrate your thinking: Hunt believes the most progress will come from a change of public ethic. “I would urge everyone to change the way you think about water, the way you think about the rain,” he says. “Learn to see stormwater running off into sewers as an unnecessary waste.” Once we can look at the problem this way, then we can have a better understanding of why it matters to fix that leaky faucet.

Creating new means to move water from one basin to another can be very harmful to ecology and economy. The experts we spoke with agree that big picture conservation efforts will be more helpful now and in the long term. 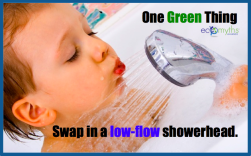