Meaty Topic: Are Large Carnivores Moving Into a New Neck of the Woods?

Plenty of people like the idea of big wild animals like bears, big cats, and wolves roaming the land…in theory. Large meat-eaters can exude an aura of cool, plus, their babies are ridiculously cute. But when these top-of-the-food-chain creatures, aka apex predators, begin to expand their territory closer into ours, even the biggest animal lover in the room may be tempted to ask, “uh, don’t they belong, like, somewhere else?”

Myth busted—they belong just as much as any native species in the local ecosystem. Apex predators can help keep smaller animals from overrunning the place, ultimately keeping natural areas in balance. The trick is to learn how to peacefully coexist, as much as is possible, both for the average Joe and Jane and statewide management alike…and that starts by simply better understanding these animals and their role in the balance of life.

PSA: It’s the Circle of Life!

What are apex predators, and why should we allow room for them in our world? For starters, there’s this. (Leave it to Disney to make the circle of life so endearing.) More than inspiration for a million Halloween costumes, though, apex predators are animals that have no predator of their own, which means they play a critical role in keeping other species populations in check. 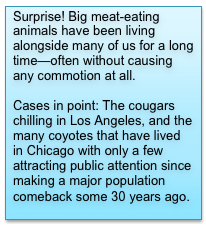 This matters because any time one species expands its population beyond what the ecosystem can support, it creates a ripple effect across the food chain, what in science speak is called a trophic cascade. So, if an herbivore population gets out-of-control big, it might eat up all the plants, which of course threatens not only that particular herbivore’s food supply, but, by extension, also harms the many other species that depend on those plants for food or shelter.

One dramatic example of this comes from Yellowstone, where gray wolves were reintroduced in 1995 to help manage the elk populations whose unfettered grazing had destroyed the landscape. By keeping elk numbers in better balance, some incredible things happened: Trees came back, which created the habitat to bring back beaver populations, which improved water flow and topography, which in turn attracted other animals for enhanced biodiversity…you get the drift. Check out this Sustainable Man video for the full mind-blowing effect.

Here’s the quick back story: Apex predators like wolves, bears, and cougars once roamed much of the United States, keeping various populations in check all along the way. Then, of course, we big noisy humans came in and many of them scooted to the outskirts, nary to be seen for decades—even centuries—in some areas.

Now, however, there’s some good news: Progress in conservation and management efforts is paying off, and some of these species are now making a comeback. (Cue applause.) As their population size increases, so naturally does the overall terrain acreage over which these animals must roam to find enough food. A prime example of this geographic expansion is taking place right now in the Midwest, as evidence mounts that black bears, cougars, and gray wolves from Wisconsin and Michigan are sniffing out new turf once again in Illinois—a state from which they’ve been absent for 150 years.

For more on the state of Illinois, we talked with Bill Zeigler, senior vice president of animal programs for Chicago Zoological Society/Brookfield Zoo (CZS), and Mike Redmer, co-chair of the Chicago Wilderness Wildlife Task Force and a biologist with the USFWS.


“Bears, cougars, and wolves are all part of the check and balance of nature,” says Zeigler. “In some areas we’ve got overpopulations of deer and raccoons that could serve as a prey base. These apex predators are beginning to reestablish themselves in Illinois of their own accord, and that could help achieve the natural balance of all these other animals.”

All signs point to Illinois—if you’re a bear, wolf, or cougar looking for new digs, that is. “These animals are expanding from the smaller ranges they had to claim back to ranges that have historically been theirs,” says Redmer. “All were native to Illinois at one time, but have been gone for well over 100 years. It is likely because populations in surrounding states are doing well that some are starting to trek across the Midwest.”

So far, he says, in the last 14 years there have been eight confirmed cougar sightings in the state, 12-13 gray wolf sightings, and 2-3 bear sightings. Because these animals haven’t been in the state until recently, there has been no official response plan. Redmer recalls the public outcry that arose last November when an Illinois Department of Natural Resources officer shot and killed a cougar found roaming a farm in rural Illinois.

“Many people questioned why this big beautiful cat needed to be killed. Then more people realized that there was no law in Illinois that protected these three species, except for wolves south of I-80, where they are protected at a federal level.” Because these animals were simply not recognized as a native species in the Illinois wildlife code, there was no official procedure in place for what to do, say, if one should turn up in the governor’s yard. Fortunately the public dialog picked up fast momentum from there, and just this August, the governor signed legislation giving black bears, cougars, and gray wolves protective status.

The consensus among many wildlife biologists and organizations, including the Illinois Department of Natural Resources, is that some of these apex predators are already “here” in Illinois, and more are likely to come. The challenge now is to come up with some basic ways to help us all safely coexist, and to ensure that best management practices-ones that minimize risk-are in place for those times we just can’t.

Meating of the Minds

Though coexisting with these animals can actually be fairly simple on a day-to-day basis, there is real work to do in the scientific and state agencies in terms of helping we the peeps do our part to keep the peace—simply because it’s a new issue. “There is a lack of thorough knowledge and understanding of how to live with large carnivores, largely because culturally this state has not had to live with them since the mid-1850s,” says Zeigler.

The key, agree Zeigler and Redmer, is to develop a smart, thoughtful approach to developing management and public awareness. This month, a roundtable of conservation hotshots organized by Chicago Wilderness, USFWS, USDA, and the CZS are convening to discuss the ecological and human dimensions of returning apex predators, from management policy to what an individual should do if they see one of these animals on their land. The group has some big problems to solve—but it’s taking its time to ensure it’s doing so deliberately.

“Large carnivores returning to areas where they historically roamed is a serious matter,” says Redmer. “To be clear, they may not return in huge volume, and it may not mean they actually breed here. But some of them are coming, and we need to be ready to live with the occasional guest.”

Once we can get the conversations and strategic management policy updates underway, it becomes simpler on an individual household level. How do we know this? Just look at the many other areas around the country where people have long lived with meat-eating animals in their own backyards. Cases in point: The cougars chilling in Los Angeles, and the thousands of coyotes that have lived in Chicagoland with only a few attracting public attention since making a major population comeback some 30 years ago. That said, it’s not all sunshine and roses all the time. There are potential dangers, too, such as a hungry or otherwise threatened animal that might get aggressive—another big part of why it’s important for Illinois leaders to develop informed abatement strategies that minimize risk.

“In Illinois we do have some learning to do about how to live with these animals. It’s very doable to coexist, though,” says Zeigler. States like North Carolina, New Jersey, and Georgia, among others, have lived with bears for a long time, he adds, while Florida and the western states have long lived with both cougars and bears.

Zeigler states strongly that we can coexist with these animals in almost any type of scenario, as long as we have the right information. We just might need to make some minor tweaks to our behavior, depending on where we live—and which of the three species we’re talking about.

Even if they’re living in some local woods, explains Redmer, you’re probably not going to see wolves or cougars very much. If you do run across one on a hiking trail, he points out that there are some simple ways to show the animals you’re not something to mess with. (Basically, when in doubt, don’t run, just make yourself look large and in charge.)

Bears are a bit different, he says, mainly because, to put it mildly, they’re kind of in to trash cans. “I try to remind people that one of the closest living relatives to bears are raccoons,” says Redmer. “A raccoon is just a mini bear with a tail—and you could make the analogy that a bear is just a giant raccoon.” That means, for starters, that you can simply use some of the same precautions for bears that you would for other wild scavengers.

The bottom line, says Zeigler, is don’t invite them into your backyard. Avoid leaving garbage uncovered, or putting out pet food. “All that stuff we do for raccoons applies to large carnivores. And when they are not influenced by [those things], they tend to stay in their own area.”

The jury is still out on just how this will all play out. But, even if only a few apex predators decide to take a chance at expanding their territory, there is some real value for all of us. Sure, it can be useful for population balance, and yes, it’s important for an ecosystem to contain biodiversity…but there’s also something simpler these animals can supply: a thrill. (Maybe not quite as much as this guy’s), but still, it’s pretty cool to live in a time and place where apex predators are making a comeback.

“I think most people will like knowing maybe these guys will show up now,” muses Redmer. “It makes our lives a little more full now that they are more abundant.”

Myth busted—apex predators belong in local ecosystems just as much as any species native to the area. They bring intrinsic value to the environment by helping keep smaller animals from overrunning the place, ultimately making natural areas better. The trick is to learn how to peacefully coexist as much as is possible.

Share this article, and the scientific resources that accompany it, with your neighbors to help your community better understand and, ideally, appreciate that these animals may be coming to town.