Do You Need Four Wheels and an Engine to Get to Nature?

City is often pitted against nature: Concrete jungle vs. forest or prairie. Civilization vs. wilderness. Shops and museums vs. prairie. But are cities as disconnected from nature as they seem? Must city-dwellers with an itch to experience wilderness rely on four-wheeled motorized vehicles to reach it?

Though many of our urban areas were built to accommodate car culture (we’re looking at you, Los Angeles), open, natural space really can be just a walk, bike, or bus ride away in cities from Chicago to Bogotá.

To chart the sometimes surprising points of access found in cities, we chatted with Gil Penalosa, PhD, of Toronto-based 8 80 Cities, an organization dedicated to creating more accessible, walkable cities that are planned around people rather than cars, and John Cawood, M.S., of Openlands, a Chicago-based nonprofit that unites people and nature.

Reality Check: You Don’t Have to Go to the Grand Canyon to See Nature

Let’s be clear: even in cities, nature is generally not that far away. You can find evidence of it all around, from the shady tree across the street to the migratory bird swooping overhead to the rich biodiversity that exists along the banks of many urban creeks. But what about those times when you want to get someplace more expansive than your own front sidewalk?

Thanks to thoughtful city planning and conservation groups working to preserve and link open space, large swaths of nature can often be found right in the heart of cities. It’s just a matter of learning where they are—and how to take advantage of existing biking and walking trails or public transit to get to them.

So, where are these urban gifts of Mama Earth? “Nature isn’t always obvious in urban areas,” says Cawood. “But wherever you live, there are public lands that have been set aside specifically as places for people to engage in nature—forest preserves and city parks most notably, but many community gardens and school gardens are also open to the public.”

Because of its expansive natural landscape, he sees Chicago as a prime example of such a gateway.

In fact, he adds, one of the top birding locations in the country is just a brief walk from one of the busiest intersections in Chicago’s Uptown neighborhood. “It’s known as ‘the Magic Hedge,’ a natural area at Montrose point that happens to be a favorite stop for migrating birds along the flyway from Canada to South America,” says Cawood. “More than 320 species have been identified there!”

So, how can we get to these local and regional treasures? Let us count the ways, via bike, foot, or transit—in Chicago and beyond.

Bike or Walk It, Baby

Creating more access to nature via biking or walking is a vital part of 8 80’s vision, which sees nature as essential to the wellbeing of 8-year-olds and 80-year-olds alike—aka the “indicator species” of a community’s health.

It all starts with making it easier for people to bike or walk safely around their neighborhoods. For example, with Penalosa’s help, Bogotá now closes over 75 miles of roads to cars every single Sunday, allowing 1.5 million people to ride their bikes throughout the city. There are also 185 miles of fully sheltered bikeways within the Colombian capital.

“The idea is to rethink the streets as public spaces,” he says, “The streets can have different uses according to the time of the day, the day of the week, of the year.” From San Francisco to Paris, cities are closing roads to cars on certain days or limiting traffic to make them safer for walkers and bikers.

Copenhagen is another excellent example of a bike-friendly city, Penalosa
observes. Sure, it’s cold in the winter, hot in the summer, and it rains all the time. But somehow, 41 out of 100 trips are taken on bikes, he says.

Do all these bike-friendly initiatives actually get you closer to expansive nature? Why, yes, they often do. A quick survey of Google Maps shows many cities’ bike maps are up to date, and you can use it to zoom out to see green areas you’d like to get to using bike routes.

Plus, valuable local resources exist on a city-by-city basis. For example, the Chicago Department of Transportation updates the city’s bike map annually, and inexpensive bike rental stations are now ubiquitous throughout the city, with user-friendly bike maps and tips available via app.

Transit to Trails: Next Stop, Nature!

Public transportation doesn’t just connect you from neighborhood to work to nightlife. In many cities, complex networks of buses and trains connect to rich natural areas in sometimes surprising ways.

Let’s take a look at Chicago, with Cawood’s help. Here, public transit provides access to dozens of natural areas outside the city limits. “At the Millennium Station, you can jump on the South Shore train for a day trip to Indiana Dunes National Lakeshore. At Ogilvie, take the Union Pacific North train to the Fort Sheridan stop, from which the Openlands Lakeshore Preserve is a 10-minute walk.”

California’s Bay Area serves up another cool illustration of how public transit can connect even the most building-bound folks to beautiful wilderness areas inside and just outside the city.

Case in point: there’s a municipal bus stop at the entrance to the expansive 2,500-acre Wildcat Canyon Regional Park—pictured above.

How to find said access points? In California, Transit and Trails provides detailed maps and schedules for public transportation options to outdoor recreation areas. In Illinois, Transit to Trails is working to make it easier to figure out which train and bus systems connect to which natural areas.

Making room for bikes on trains and existing roads is important—but it’s not all that’s happening in the way of connecting people to nature. Cities and orgs are working to convert areas of otherwise wasted space into places for the community to stretch their legs and their perspectives.

The High Line is a high-profile example. In Manhattan, this 1.45-mile stretch of abandoned elevated train tracks was converted into an aerial park covered with colorful and sustainable plants, and has quickly become a popular walking path.

Reclaiming unused train tracks in such ways is what the Rails-to-Trails Conservancy program is all about, with a vision that calls for creating trails within three miles of every home in the U.S. By transforming unused rail lines into vibrant public places, the goal is to connect its current roster of 30,000 miles of rail-trails and multi-use trails to a nationwide network.

Access Is Flourishing—But We Still Need More of It

While many cities are making great progress toward becoming more livable communities, there are still spots where it can be tougher to get someplace beautiful. For example, in LA, only one-third of school kids have a park within walking distance (i.e. a quarter mile), according to the Trust for Public Land. That’s especially dismal when compared to other big cities, like Boston, which provides close access to parks for 97 percent of city kids, and NYC, 91 percent.

“We need to have nature everywhere in cities—within walking or biking distance, but also right outside your front door, in schoolyards, in city halls,” says Penalosa. “And when you want to go further, you should be able to use public transit.”

“It’s about changing habits around the built environment. How do we want to build our cities?” he asks. According to the U.S. Census, population will grow by 100 million people in the next 35 years—meaning we need to build around 40 million homes.

“How are they being built? Is everyone having all their basic needs met within a 10-minute walking distance, or do you have to drive everywhere just to buy eggs or milk? We need to create great communities for these millions of new people who are going to be in the same space in the next 40 years.”

In other words, while cities like Chicago and Bogotá are doing a great job, and ambitious nonprofit organizations are working tirelessly to connect the dots, there is yet work to be done.

The notion that nature is good for you is picking up steam—for good reason. As we rely less on cars and more on feet and bike wheels, we’ll all be healthier. We’ll experience less noise and stress. Air quality will improve. We’ll be happier and smarter!

And, as Cawood points out, as more people experience nature, more people decide it’s worth their while to make eco-friendlier choices, too, whether by supporting conservation work or opting for Earth-friendly products at the store.

“Environmentally, by biking or taking public transit, you are impacting social norms,” Cawood explains. “If you do it, your friends, family, co-workers and neighbors might be more likely to try it out. If it catches on, you’re taking cars off the road, which conserves fossil fuels and essentially cleans the air.”

Money is another factor. People who decide to go full throttle with car-free living could save big time, comments Penalosa. American who use cars spend one out of four dollars on mobility, when we could be spending less than 4 percent of our income if we walked, biked or took public transit instead. With AAA’s estimate that having a car costs $8,500 a year, taking a car out of the equation is kinda like winning the Lottery, but with way better odds.

Pretty decent perks, when you consider all you wanted was to stretch your legs and get a nice view of nature, huh?

In livable cities, including many in the U.S., you don’t need a car to get to nature—you just need your feet, a bike, or ticket to ride public transit.

Still, there are many ways we could improve access and provide better connecting points to places both within city limits and further afoot. 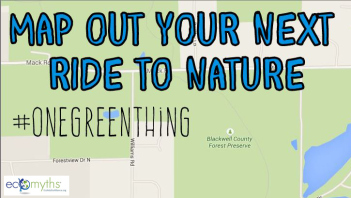 Map out your next ride to a local natural area or park—then go forth and enjoy!

If 5 percent of Americans bike instead of drive five miles to and from open space this weekend, round trip we’ll: