Let’s talk salamanders. Why should we get excited about these small secretive creatures? 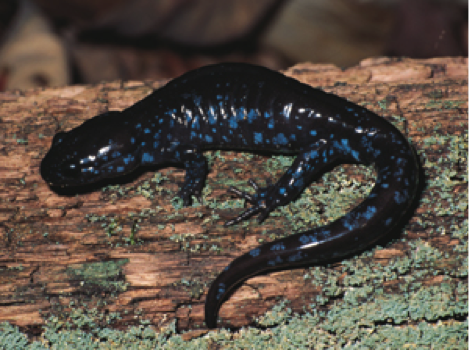 Although they are very good at hiding under rocks and logs, they should not by any means be overlooked. There are just under 600 species of salamanders in the world. While most live in the tropics, a whopping 17 percent are found in the Southeast United States.

The blue-spotted salamander (aka Ambystoma laterale/the little guy on our EcoMyths logo) makes its home in Great Lakes states—here’s some video evidence from Ryerson Woods in Lake County, Illinois.

Some salamander species have been around for over 200 million years, outliving the dinosaurs by 40 million years! Having quite a few years on us, I think it’s safe to say that they have an important lesson to teach…

Because they are sensitive to chemical changes in the environment, salamanders are an excellent bioindicator species. This means that a thriving salamander population indicates a healthy ecosystem, while a dwindling salamander population generally indicates an unhealthy ecosystem. When salamanders start to disappear, chances are there are some major environmental issues in that area. For example, if aquatic salamander numbers starts to decline, it is likely that there are high levels of mercury or other contaminants in the water. (For more on that, check out this great article from the Smithsonian Environmental Research Center.)

Even though most salamanders don’t get more than a few inches long, they collectively eat more biomass than any other living creature in their habitat, including bears! This makes salamanders an essential predator. Without them, mosquitoes and other insects that we aren’t too fond of would rise out of control.

Despite the fact that they survived the climate changes, predators, and other factors that caused the dinosaurs to go extinct, salamanders—along with amphibians as a whole—are declining at an alarming rate. Nearly a third of the world’s amphibians are threatened. Unfortunately, due to habitat loss and pollution, some salamander species such as the Ainsworth salamander (or Plethodon ainsworthi) have already gone extinct.

One endangered type of salamander is called the Weller’s salamander (Plethodon welleri). The species was discovered in 1930 by 18-year-old Worth Hamilton Weller. When I was in Virginia last June for a two-week college field study trip, I was lucky enough to hike in the few areas where Wellers are still thriving—at the top of Mt. Rogers, Whitetop Mountain, and Pine Mountain.

These beautiful gold-speckled sallies migrated south during the Wisconsin Glaciation. Now there is only evidence that they live at tops of mountains in Virginia, North Carolina, and Tennessee.

Being cold-blooded animals, their temperature changes to that of their surroundings. Since Weller’s prefer colder temperatures, they live at higher elevations so that they can lay their eggs under moist logs of the spruce-fir forests. Due to climate change, the Weller’s have no choice but to move up in elevation to reach the colder temperatures they need to survive. The fear is that they will be forced into extinction as the climate gets warmer because they will not be able to climb any higher than they are now. 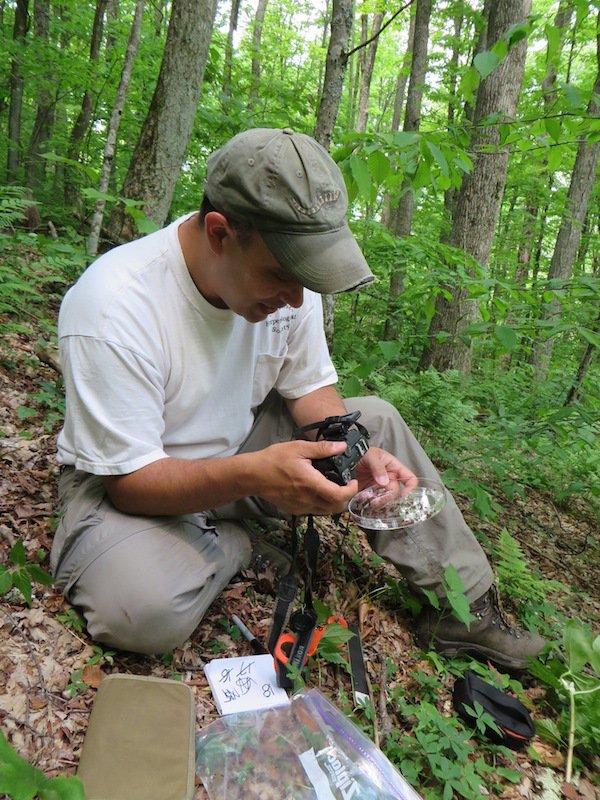 Kevin Hamed, who is also a biology professor at Virginia Highlands Community College,  snaps a close-up of a Weller’s salamander.

In attempts to help Kevin Hamed, a PhD candidate at University of Tennessee researching the distribution of Wellers in the Mt. Rogers National Recreation Area, my group of 16 students from the College of Lake County caught and released 18 salamanders. According to Kevin, that is an outstanding accomplishment. We took pictures, measured, and marked the location of the Wellers in order to track the movement of the species along Whitetop Mountain within a specific time frame. Not only did I form a love for salamanders on this field study trip, but the experience also enlightened me on how significant a role one organism can have on an entire ecosystem.

My advice: Next time you take a hike or go on a nature walk, peek under some logs and rocks near a stream to see what lies beneath. If you are lucky enough to find a bright red, yellow, or green salamander, think about the fact that these creatures have been walking the earth since long before the dinosaurs. What our generation decides to do in the next few decades will determine the fate of these precious animals.