Scaring Up the Facts About Bugs

They’re weird looking! They have too many legs! Some of them, sometimes, bite! No, we’re not talking about Justin Bieber’s fan club. This time, it’s all about bugs, and just how scary they actually are.

Myth busted: While bugs like Dracula ants, cannibalistic spiders, and million-leggers may sound scary in theory, in reality, most are not only harmless to humans, but would also far prefer to avoid giants like us altogether. What’s more, without bugs our world wouldn’t function quite so well.

To conquer our fears, we talked with some experts who study these tiny creatures, and live to tell the tale: Corrie Moreau, PhD, associate curator of insects for the Field Museum, Petra Sierwald, PhD, associate curator, Arachnida and Myriapoda, also from the Field, and David Wise, PhD, associate director of the Institute for Environmental Science and Policy and Professor of Ecology and Evolution, at the University of Illinois at Chicago.

Why do we think bugs are scary? There’s the unfamiliarity factor, for one, and that their bodies are so different from ours (uh, hello? They have so many extra limbs, their stomachs are in their hind areas, and they often have taste buds on their feet!). “We are scared by creatures we don’t know. Knowledge is the best defense against fear,” says Sierwald (aka the Yoda of arthropod science).

Let’s start with some basics—the word bug is a sort of urban dictionary version of arthropod. Arthropods are invertebrates (read: spineless animals) with jointed bodies and legs that have roamed ye olde planet Earth since the Cambrian period (500 million years ago, give or take). There are four main groups, recognizable more or less by the number of legs they have: insects, which have six; spiders, with eight; crustaceans, which have 10-14, and myriapods (that’s millipedes and centipedes) that have, well, anywhere from 20 to 750.

Though we don’t see all that many bugs in our modern everyday lives, their presence is truly impressive in the scheme of things: they make up roughly 90 percent of the animal kingdom, with about one million known species.

One million is kind of a lot to explore, so for now, we’ll take a quick close-up view on some of the most prominent land dwellers: spiders, insects, and myriapods.

Close Up on Insects: Ants Marching

There are about a billion billion insects alive at any time (yes, that’s about 160 million times more than we humans, but who’s counting, other than UC Berkeley?). Insects include everything from butterflies and bees (which don’t all sting!), to mosquitoes (the males don’t bite, BTW; they just pollinate flowers), beetles, and ants. The latter make up Moreau’s field of study and numero uno in our list of non-scary examples.

Not only are ants not scary, they’re actually incredibly important to the functioning of our entire planet. “You want the ants there,” Moreau explains. “Even though we may not see it, they’re bringing oxygen and nutrients to soil, breaking down matter, hunting pests, and dispersing seeds. Without ants, whose prevalence on every continent except Antarctica make them one of the most vital soil-dwellers in the world, we wouldn’t have healthy gardens or whole crops, or agriculture on the scale that we do,” she says.

Plus, they can be pretty cool if you think about it. People often ask Moreau why she devotes her work to studying ants, a question she finds…amusing. “No one would ask that about the study of birds or mammals—but if you add all those species up, there are still fewer species than the ant species alone.” She says there are more than 13,000 known species of ants—and at least double and maybe triple that waiting to be discovered. And even though they’re very, very small, if you put all the ants alive on a scale, they’d weigh about the same as we 7 billion humans do.

Next example of a not-so-scary bug (that just sounds scary): Dracula ants feed on the blood of their own young, which, yeah, can sound scary at first. But, Moreau explains, it’s actually a positive mechanism in an ant colony. This “nondestructive cannibalism” doesn’t cause any harm to the larva, which continue to grow, and serves as nature’s way of returning foods to the adults.

Turtle ants are one of Moreau’s personal faves. Amongst the 100+ species of turtle ants is Cephalotes varians (“One of the most remarkably beautiful creatures,” Moreau marvels), which lives in hollow twigs. The large-headed “major” turtle ant looks like she’s walking around with a dinner plate on her head, according to Moreau. The flattened disc enables her to serve as the nest’s first line of defense.

“Her job is to fit exactly inside the hole of the twig they live in, acting as a living door, and all day long to stand there and block the entrance. She only gives way when an individual smells right.”

Scary? Not so much. Next!

Close Up on Spiders: Eight Is Great (When It Comes to Legs, That Is)

“Many people are scared that spiders will bite, but most won’t,” begins Wise. Those that do bite tend to do so only if they’ve been bothered—they’re not hunting you as prey, and most of their bites won’t actually hurt. There are a couple of exceptions, including the brown recluse and black widow, which are not normally aggressive, but can be dangerous when surprised.

The odds of encountering one of the few truly dangerous spider species is very, very low, considering that the bad ones make up a small percentage of the 40,000-ish described species of spiders—more than all vertebrates put together, according to Wise. To put a finer point on the sheer diversity, consider that when you visit a forested area, there could be well over 50 different species in the top layer of dead leaves alone.

Most spiders are carnivorous “generalists” when it comes to eating, but while they aren’t necessarily picky, they do stick to bugs that are smaller or the same size as themselves. Cannibalism is not uncommon—after all, when you’re a generalist, another spider can end up being your best bet for dinner. But, despite the fact that cannibalism is not exactly an attractive trait in human circles, it’s only natural in many spider species. In fact, Wise points out that cannibalistic wolf spiders show more maternal care than other non-cannibalistic spiders.

Some of the coolest and weirdest bugs in Wise’s book, Spiders in Ecological Webs, include:

Scary? No, because only a few of them may bite. If you roll over on one in bed, for example, it may bite you because, as Wise points out, if a 10,000-pound monster rolled over on you, you’d bite too. Going into a garden or woods and just watching spiders, though, can help you see how non-scary—and, yeah, we’ll say it, beautiful—some are up close.

The More, the Merrier: Legs Edition

Myriapods, which include centipedes and millipedes, may get the same generic nickname, “million-leggers,” but there are actually a known 3,000 centipede species, and 10,000 millipede species. Of millipedes alone, another 85 percent are estimated to be out there, still waiting to be described.

Sierwald has found that people are especially afraid of the many-legged creatures among us. Even when she’s demonstrating millipedes’ cool “choo-choo train leg motions,” folks can get squeamish and worry for her safety. She just laughs: “Would I stand here if it would bite?”

But millipedes prefer a different kind of defense. Some, if threatened, may release a smelly, bitter chemical cocktail (which South American monkeys actually use as an insect repellent by rubbing a large millipede over their fur, but that’s another story). One of the most fascinating millipedes in Sierwald’s professional opinion is a shocking pink dragon millipede. Officially identified in Thailand in 2007, scientists say this eye-catching new species sometimes smell like almonds (thanks to its ability to release cyanide to warn off predators).

A Bug Is a Bug Is a…Never Mind

Once you learn more about bugs—insects, spiders, and millipedes, oh my!—you can begin to see how generally un-scary they are, especially because they’re interested in avoiding us altogether. “Even if they have jaws that look specialized to hurt you…they are like that because of the specific food they eat,” explains Moreau. “They would never try to eat a human. When they bite it’s just because they’re in defense mode.”

Moreover, getting to know them can actually be a fascinating journey when you dive in. Whether you’re ready to break out the magnifying glass or not, though, it’s good to note that all bugs-squirmy, wriggly, fascinating little things that they are-play intricate roles in our world, from supporting healthy soil to maintaining balance in pest populations.

Bugs are not out to get us. While arthropods like Dracula ants, cannibalistic spiders, and million-leggers may sound scary in theory, in reality, most are not only harmless to humans, but would also far prefer to avoid giants like us altogether.

Get over your fears of bugs by looking at them more closely. (If none are handy, check out Alex Wild’s eye-catching pics here.) 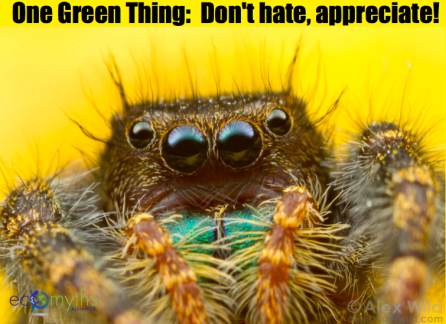 The longer you look at them, the more you’ll see their intricacies—and that your relatively giant size is more of a threat to them than they’ll ever be to us. So if you see a bug in your basement or in your backyard, don’t kill it—instead, watch its behavior for a while. You may just find yourself enthralled!