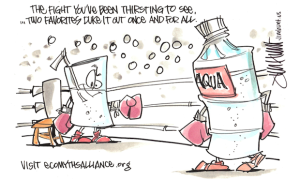 The crowd roars as the rivals enter the arena. Who will win this epic match: bottled or tap water?

A shiny clear bottle takes the ring, and it sure looks like a champ. Its factory-sealing suggests safety, its plastic material, convenience, and the pristine waterfalls gracing its label ooze purity—together inspiring confidence in Team Bottle’s enormous fan base. Yes, according to the International Bottled Water Association, Americans drank 9.67 billion gallons of bottled water in 2012, up 6.7 percent from 2011. That puts its sales numbers ahead of milk, juice, and coffee, according to Columbia University Water Center analysis.

“Have you even seen where it comes from?” someone jeers as the scrappy faucet-sourced challenger jogs into starting position. Still, filtered tap water has its own diehards, too, with groups like Food and Water Watch and Environmental Working Group (EWG) cheering it along as just as safe and far more sustainable than bottled.

Round 1: Impact on Health

Aside from convenience, the perception that bottled water is cleaner than tap is its hottest selling point. After all, why else would we pay for a bottle of something readily available from any sink?

Here’s the first blow: Sometimes bottled water is itself filtered tap water, according to an FDA consumer update…which begs the question, if it’s coming from the same place as tap water, how much cleaner can bottled water really be?

To shed some light on that and other questions, we caught up with Nneka Leiba, MPH, EWG’s deputy director of research and co-author of the 2011 Bottled Water Scorecard. According to EWG research, she explains that as much as half of the bottled water on the market comes from the municipal water supply, aka the tap.

The other half is rife with transparency issues—the 2011 study reports that 18 percent of the 173 bottled water companies surveyed did not disclose the location of their source, and 32 percent did not explain the filtration or treatment method. If the promise of a cleaner source of water is what lures us to buy bottled water, then shouldn’t we have access to information about that source? Not according to federal law, no.

The FDA, which regulates bottled water, does not have the legal “authority to require bottled water manufacturers to disclose” information similar to that provided by municipal water systems, according to testimony transcribed on its website. “Regulations are more stringent around tap water than bottled, because tap has to divulge contaminants they find while bottled water is not necessarily required to do so,” comments Leiba. For its part, the FDA has stepped up regulations in recent years, adding E. coli testing as a requirement for bottled water suppliers.

Still, EPA, NRDC, and EWG websites each state that bottled water is “not necessarily” safer than tap, while public health experts at Mayo Clinic and Association of Public Health Laboratories say there’s not much difference cleanliness-wise, making it more a matter of personal preference.

Bottled water comes back with a hook: Tap water is no paragon of cleanliness. The EWG’s study of 20 million tap water quality tests nationwide detected a total of 316 contaminants in finished water testing across the country.

Take, for example, chromium-6, (aka the carcinogen made infamous by Erin Brockovich). Even with so much publicity about this chemical contaminant, EWG found that 1,000 California water systems have this in their water—but current standards do not require cleaning it up. (Californians, the state is taking public comments on the topic here.) That’s just one example—every municipal water supply has its own set of contaminants of concern.

The solution championed by EWG: Opt for filtered tap water. “EWG thinks that with the right water filter, you will reduce most, if not all, contaminants of concern,” say Leiba. “So there’s no need to invest in bottled water if the reason you are buying it is for purity.” To buy the right filter, check the tap water database, then the filtration database to find which filters are best for your local water.

Another hit: What’s inside the bottle isn’t the only thing that impacts public health. As the Public Health Law Center report says, most bottled water containers are made from #1 polyethylene terephthalate (PET), a resin that contains toxic chemicals such as DEHA, a suspected carcinogen, and BBP a suspected hormone disruptor. This makes it especially dangerous to reuse a PET water bottle, because the plastic degrades with each use, upping the chances of its drinker consuming leached chemicals and bacterial growth.

“We know the chemicals used in plastic manufacturing, and we know what they have the potential to do in animals in the lab, such as obesity, diabetes, infertility, prostate problems…all sorts of things that are mysteriously on the rise in humans,” comments Henry Carson, PhD, a marine biologist with the Department of Fish and Wildlife in Olympia, Washington.

So, considering that bottled water often comes from either a municipal or unknown source and its plastic is linked to multiple public health hazards—while tap water is just a filter away from being clean—tap wins this round.

Round 2: Impact on Ecosystem

Are you sitting down? Here’s a gloomy factoid: The majority of Americans don’t recycle their bottles. Leiba cites an EPA study that found that only 29 percent of PET bottles and jars were recycled in 2011. What happens to said plastic debris?

In other words, no contest. Tap clearly owned this round.

Round 3: Impact on Resources

Plastic debris buildup isn’t the only drag of bottled water. The drudgery begins at the beginning. You need petroleum to manufacture the bottle, then energy to bottle, process, and ship it—together making bottled water 1,100‑2,000 times more energy-intensive to produce than tap, according to an article by the Pacific Institute that was published in the peer-reviewed Environmental Research and Letters. For perspective, the institute’s fact sheet says that bottling water produced more than 2.5 million tons of carbon dioxide emissions in a single year—about as much as 475,000 passenger cars, according to the EPA CO2 calculator.

There’s also the moral conundrum of privatizing a public good, as Columbia Water Center points out. While 1 billion people around the world lack access to clean drinking water, bottled water companies make profits “by drawing water from public water sources, putting it in plastic containers, and reselling it at 2,900 times the price of regular tap.”

Turns out, groundwater pumping by bottled-water companies can deplete underground aquifers and harm watersheds, according to several groups including the Worldwatch Institute. The bottling facilities themselves contribute to poor water quality around the world, according to a United Nations report.

With tap water, we don’t have to worry about any of that. Bottled water is down for the count…almost.

In this last round, the contenders duke it out strictly on consumer appeal.

With a tie for convenience and taste, this round clearly goes to tap on the money matter alone. Ding, ding, ding…

Filtering tap water can make it as clean as bottled water—at a fraction of the price. It also reduces our plastic pollution. Together, it’s a TKO for tap.

So, now what? One easy way to make a difference is to drink filtered tap water. 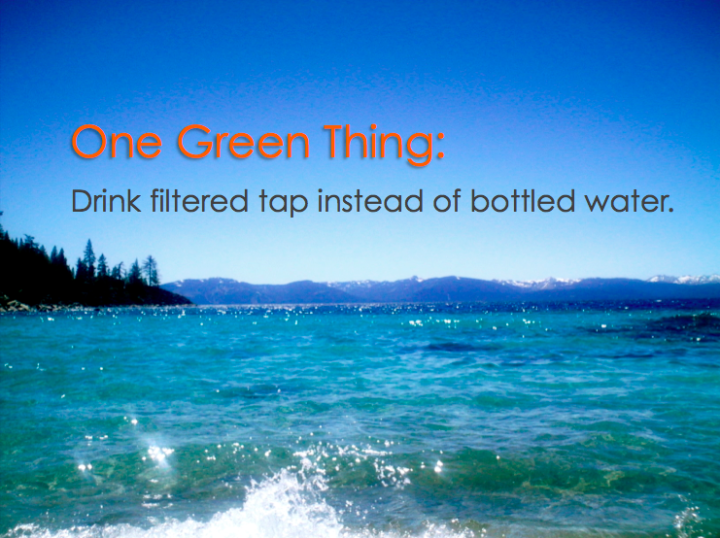 The type to buy depends on the contaminants in your local water, but here are some good options to consider: ZeroWater pitcher, PUR Advanced faucet filter, and the Whirlpool Reverse Osmosis under-sink system. To find out which is best in your area, visit EWG for the full scoop.

Why bother? For one thing, if everyone in the U.S. buys one less bottle of water per year, we’ll keep 6.8 million pounds of PET plastic out of our waterways. Cheers to that!

BTW, if you’re looking to take the next step, here are a few other ways to help: