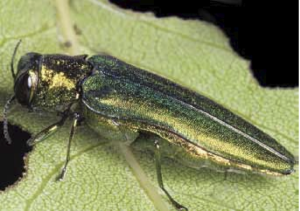 You may have noticed many beautifully formed lush street trees and park trees being cut down over the past few years. Most of these are ash trees that are suffering from an infestation of emerald ash borer. At EcoMyths we wondered: Why do the trees have to be cut down? Is there any other way to control the emerald ash borer? What can people do to help?

In honor of Arbor Day on April 26, these and other questions were probed on our latest EcoMyths Worldview segment.

Our expert guests were Peter Gordon, forester for the City of Lake Forest, Illinois; and David Horvath of the Care of Trees. Several communities in northern Illinois, including Lake Forest, as well as EcoMyths partners the Morton Arboretum and the Chicago Botanic Garden are campaigning urgently this year to raise awareness of the emerald ash borer (EAB). This is not an insignificant issue for Chicago—there are nearly 13 million ash trees in the region that could become diseased and need to be cut down. Naturally, we needed to know more.

Our conversation revealed some important points:

What’s a Person to Do?

We also asked our guests how a person can help. Peter, as a city forester, is responsible for protecting healthy ash trees and for ensuring that infected trees are removed. As with other city foresters, he knows where most of the ash trees in his city are located—especially those lining the city’s streets and in its parks.

—As part of our partnership with Worldview, this content may also appear on the Chicago Public Media EcoMyths series page.