I had some moments of transformative understanding this past weekend at the International Wildlife Conservation Expo. Moments that blew my mind, brought tears to my eyes and above all, changed what I thought I knew about wildlife conservation.

Hosted by the Chicago Zoological Society/Brookfield Zoo (CZS), the Wildlife Conservation Network, and the Forest Preserve District of Cook County, the day-long learn-fest had a star-studded line-up of conservation rockstars. I had the great fortune to sit down with two of them—Gary Wolfe, PhD, current staff member and former executive director of Vital Ground, and Stuart Strahl, PhD, president and CEO of CZS, who served up some conservation realness.

The amount of knowledge and insight crammed into those conversations would make this blog page explode. For your safety, this blog article has been turned into a two-parter to prevent any knowledge explosiveness. So, let’s dig into the unfurgettable topic of bears!

Bear in Mind, It IS Vital Work

Missoula, Montana-based Vital Ground works to protect land that’s important to grizzly bears and other wide-ranging wildlife. One of their key campaigns is to create habitat corridors between already protected lands, which help support the growing grizzly bear population and ultimately other wildlife. These corridors connect grizzlies in the lower 48 states to more robust populations in southern portions of Alberta and British Columbia. But Wolfe emphasized that the real, on-the-ground work is with people. Changing individual hearts and minds, so that local communities can appreciate the importance of grizzlies in healthy ecosystems, comes first. Once Vital Ground has the local support of the people, the land to protect and conserve, then the local community supports the bears naturally moving into their habitat.

Winning public support isn’t always easy. Large predators across the country are expanding their ranges and people are, understandably, a little wary about new animals coming into their figurative—and sometimes literal—backyard. In fact, that wariness is a big part of why we recently busted the myth that “Wild Predators Belong Anywhere But Here.” By exploring the countless ways that apex predators (such as a grizzly bear) promote ecosystem health, we overturned the myth that these important animals don’t belong “here.”

So, how does Vital Ground go about changing aforementioned hearts and minds? I asked Wolfe about the myths he’s come across—and how he has learned to bust them.

Wolfe explained that most of the misconceptions about living with bears come from people not in grizzly country. People who have lived with bears their whole lives tend to be bear aware. Bear aware means living a predator-conscious lifestyle that really comes down to simple changes in everyday life that can result in not having negative bear interactions. (And bear aware rhymes, which is awesome.) This can mean things like making sure your garbage is protected or putting up an electric fence around fruit trees. Oh, and keeping bees out in the open is also a no go in grizzly country. Grizzly bears love honey. (And you thought it was just Winnie the Pooh…) Simple changes in your everyday life? Where have I heard that before…

According to Wolfe, any pushback for grizzly population expansion doesn’t come from people far away from grizzly country, either. It comes from the people just outside of established grizzly country. In the proposed areas of protected grizzly habitat, myths abound. The most common? Grizzlies want to eat you! Rarr! But: Myth Busted, per Wolfe: Grizzlies actually don’t want anything to do with humans! You can learn more about bear facts here. 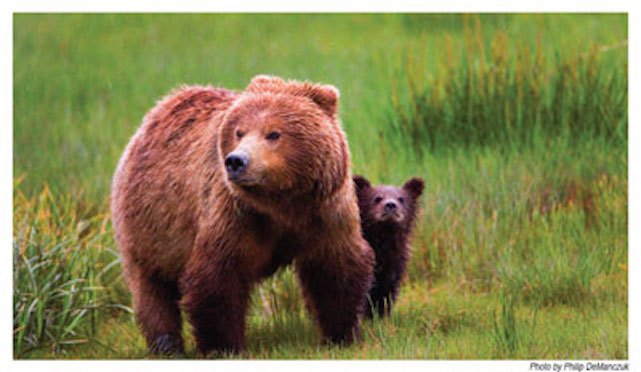 Interested in protecting these important animals? Wolfe said One Green Thing you can do is to support an organization that protects and conserves vital ecosystems for wildlife populations, such as grizzlies and others.

Just as important, he says, is to learn more about the issues regarding large mammals living in proximity to humans and spread the word. He encourages everyone to educate themselves on the facts about bears and other large predators so they can join the conversation and help dispel some of the grizzly myths that are out there.

Here are some small steps you can take to a furrier world: