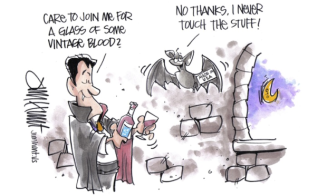 Picture this: It’s a dark and stormy night (isn’t it always?), and the streetlights have all gone out. You hear a suspicious rustling just ahead of you. Skin prickling, hairs standing straight up on your neck, you cautiously step forward. Suddenly, you see a winged shadow flicker across the broken drifts of moonlight. Where’s Buffy when you need her? Then it dawns on you that it’s not so likely that there are actual vampires dwelling in Chicagoland streets…could what you’re sensing be a bat? And if it is—is there valid reason to be afraid?

Gauging the Fear Factor: The Most Misunderstood Mammal

If you are afraid of bats, you’re not alone. There’s something about them that has long inspired fear in humanity, from folkloric connections to bloodthirsty vampires and even Macbeth’s witches to the more benign concerns that they’ll mess up our hair. These days, reason dictates that those things are more old wives tales than truth.

And yet…the fear lives on. Why? Tim Sullivan, the Curator of Animal Behavior at the Brookfield Zoo, hypothesizes that people fear bats because they look so different from most mammals, thanks to their almost (okay, actually) spooky wings.

Turns out, they’re not as different as we think. Sullivan, who has spent more than 30 years caring for animals at Brookfield, says we humans have a lot in common with those toothy creatures of the night. Like us, they’re social mammals: “Moms raise one pup every breeding season that they nurse and care for, just like we care for our young, cradling and protecting them.” And even their wings aren’t unlike our hands—he says they have the same finger bones, just longer. (More on that in this Brown University PDF.)

“If you look at their faces,” he adds enthusiastically, “they’re cute and furry, like a fox, which is why they’re sometimes called ‘flying foxes.’ If you have the time and inclination to look at them and get past the wings, you’ll see it’s really a cute animal.”

And Sullivan has had plenty of chance to get to know the furry critters, since the Brookfield Zoo has two bat exhibits, including the large, walk-through exhibit in the Australia House where around 30 endangered Rodrigues bats live, flying freely amongst visitors, hanging out upside down with their babies, and feasting on their victim of choice: mangoes. Yep, these are fruit bats, and they’re frankly not interested in our hair—or our blood for that matter.

This is not to say that blood-sucking bats don’t exist. In fact, the other exhibit at Brookfield does pay homage to the “darker” side of the species: the Vampire Bat. But, Sullivan hastens to explain that you’re not going to find these wild in the U.S. In fact, unless you’re camping in the middle of the jungle in Central or South America, you’re not likely to ever encounter them at all…and even then, they’re more interested in blood from birds and goats than in your human varietal.

And as for bats getting tangled up in your hair? Well, unless your ’do is full of insects, that’s pretty unlikely. When Illinois bats are out, typically from dusk through dawn, they’re on the hunt for bugs and bugs alone. Their echolocation skills enable them to tell the difference between a bug and a human head the size of melon. As Sullivan points out, if you walk into a cave and disrupt the bats, you might have 1,000 bats flying around—but not a single one will hit you. You’re just not their type.

Now, there is one fear that is comparably more rational: the fear that a bat bite could give you rabies, which can be fatal if untreated. Many mammals we encounter every day can also carry rabies—we’re talking neighborhood animals like raccoons, skunks, cats, and dogs. But the fact is that the majority of animals that have been tested positive for rabies in Illinois are bats (click here for a map of 2011 cases). Still, according to the CDC, over the past century the annual number of human deaths from rabies nationwide has dropped sharply from 100 to an average of two or three. And in Illinois, the Illinois Department of Public Health reports that rabid bats account for less than 1 percent of the bat population as a whole.

In short, Illinois bats are no scarier than a squirrel. But there’s even more to it than that. There’s actually good reason to love these little guys.

We’ve Got Friends in High Places

Now that we’ve established that bats are a) not out to get us, and b) really just little fuzzy wuzzies with wings and cute baby pictures, it’s time to find out why they could accurately be called our friends.

Bats play a vital role in our ecosystem. For example, fruit bats are one of the best and only pollinators in some areas ravaged by deforestation, according to Sullivan. They’re the only seed-dispersing animals that drop seeds in open spaces, enabling pioneer plants to grow, which means fragile plants can come after that, and ultimately reforestation can occur. “Fruit bats are a critical keystone species for the environment, and as far as reforestation, they’re the only chance we have—because when the plants come back, the animals come back. They really are the key of life for the ecosystem,” explains Sullivan.

Meanwhile, here in Illinois, the dozen bat species native to our region are incredibly efficient insectivores. A single bat can eat up to 3,000 insects—including the dreaded mosquito—a night. This alone makes bats something less to be feared and more to be celebrated, right?

Aside from the fact that we’re all a little less itchy because of Illinois bats, there’s also the larger health impact of their food of choice. Without them, viruses like West Nile would be even more of a threat, and farmers would have an even harder time growing things organically. The economic benefit isn’t shabby, either: the USGS estimates the value of pest control services bats provide free of charge for the country’s agriculture industry runs between $3.7 billion and $53 billion annually.

Real Softies: Our Furry Friends Aren’t As Tough As They Look

Unfortunately, another key way bats differ from vampires is in terms of their vulnerability. In addition to deforestation, which threatens habitats around the world, a recent epidemic of the mysterious white-nose syndrome is wiping out bat populations across North America.

Since the first sighting of a suspicious white substance on bats’ muzzles in 2006 in New York, scientists have learned only a handful of things about WNS: it’s caused by a fungus, which doesn’t appear to pose a health risk for humans, it’s devastating for bats, and there’s no known cure. In some caves, 90–100 percent of the bats are dead or dying.

Within a few short years, WNS has spread across 16 states and four Canadian provinces. It currently affects more than half of the 45 bat species native to US, including the federally-endangered Indiana bat that’s still managing to hang on in our region.

To date, the U.S. Fish and Wildlife Service has made $3.3 million in research grants to determine the cause of white-nose syndrome and how to manage it. Even in advance of hoped-for research results, however, the agency has issued a national plan to coordinate efforts among states, federal agencies and tribes, “to avert irreversible losses to bat populations, and associated ecological impacts, throughout North America.”

Sure, some bats may have faces that only mothers could love. But just imagine a world with no bats. Now that’s scary.

Getting By With a Little Help From Their Friends

So, what can we humans do for our winged mammalian allies? As always, the first step is to learn more—to get to know the animals and understand why they matter. Visit one of the Brookfield Zoo’s daily 15-minute Bat Chats, when a keeper brings out a particularly engaging bat to meet and greet. It’s okay if you’re more comfortable keeping your distance at first—but Sullivan doubts you’ll stay there long. “Kids don’t necessarily have an innate fear of bats right away, so they’ll come up front while their parents stay at the back. But by the end of the Chat, even the [most squeamish visitors] have made their way up to the front.”

After making that first acquaintance and sharing the scoop on your new pal with family and friends, the next best thing to do is keep up the good work of buying responsibly. When shopping for paper and furniture, look for Forest Stewardship Council-certified goods, which means they’ve been made with sustainably sourced material. And when buying food, know where it’s grown: buying from local farms you trust means you can be sure your dollars aren’t going to clear cutting forests (aka, important habitats for bats and other wildlife) for non-sustainable agricultural pursuits.

So next time you’re shopping, wandering around the zoo, or catching the latest vampire flick, just remember what Sullivan says: “Bats are just cute animals trying to survive like we are—they’re cute, lovable, care for their young like we do—and they are there to help us.” Let’s return the favor.

Bats are our friends. And they could really use our help right about now.