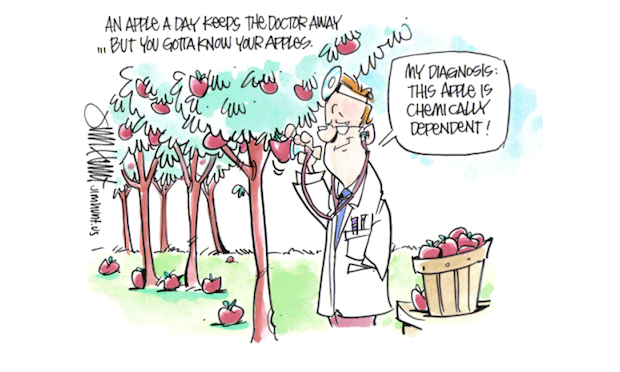 With apple season in full force, and dreams of cider, pie and other fall favorites dancing in our heads, we wanted to know:is the crunchy fruit still a healthy pick? In this era of pesticides, does “an apple a day” still keep the doctor away?

Some argue no, at least when it comes to apples not grown organically. The Environmental Working Group, a nonprofit that works to protect public health and the environment, ranks the apple number one in its 2011 Dirty Dozen list—the aka, never-eat-these-items-when-they’re-not-organic-or-else list.

And this list is based in science, not public opinion. EWG came up with the rankings after analyzing results from 51,000 USDA and FDA tests between 2000 and 2009. According to the study, 92 percent of apples tested contained two or more pesticide residues—after being washed. And as a category, apples were treated with 56 kinds of pesticides—far more than most produce. So what? Well, many lab studies point to the health risks of too much pesticide exposure. Even the U.S. EPA says pesticides can cause problems such as birth defects, nerve damage, and cancer.

All in all, it’s a pretty doom and gloom sort of outlook for the non-organic apple. So we thought, no big deal, let’s just buy locally grown, organic apples. Buying local means we save fossil fuels used in transport, and buying organic means we’re supporting biodiversity and public health by keeping toxic pesticides out of our bodies and our soil. Right?

Not so fast. Turns out, while there are a few organic apple growers in the region, it’s actually pretty hard to find organic, Illinois-grown apples.

Wait, rewind. Apple picking orchards are all over the place, so shouldn’t that mean they’re easy to grow organic locally? We decided to get to the bottom of the case by picking the mind of Rick Belding, M.S., Fruit and Vegetable Horticulturist at the Chicago Botanic Garden.

His short answer to our question: it depends on the apple…and you might consider having a pear instead.

Here’s the deal. Belding explains that apples are the most difficult fruit to grow organically in Illinois. Although the CBG’s Regenstein Fruit and Vegetable Garden has been using USDA organic standards in its apple orchard since 2008, Belding says doing so successfully in Illinois is “daunting to say the least.”

Why is it harder than other produce? He attributes this to a host of factors specific to our region, including an ever-changing “cadre of insects,” climate, fungal and bacterial issues, and variations from year to year in things like pest and predator population.

Wondering who’s in the cadre? Same here. Belding says there are several, but called out three big guns in apple-nibbling in particular. For one, there’s the coddling moth, which as a caterpillar works its way into the apple through the blossom end. As Belding says, “once the grub is in the core, there’s just nothing good that follows.” There’s also the aptly named apple maggot, which we’re thinking is pretty self explanatory. And the most ominous of the trio: the plum curculio, which Belding describes as a “six-legged, alien looking, snout-nosed beetle.”

Belding says the CBG is uniquely suited to withstand some of these pest invasions, thanks in particular to the healthy habitat it presents for barn swallows, which catch some of the critters in flight. They also do things like spray with organic-approved insecticides like sulfur and copper, and use decoy sticky apples to catch the apple maggots.

Meanwhile, in places like the Pacific Northwest and New Zealand, Belding says the climate and soil are much better suited for growing apples organically. But buying organic from afar comes with its own set of catch 22s, mainly due to the added environmental impact of transporting food.

Any Cosmetic Surgeons in the House?

Sadly, even when the brave little organic Illinois apple makes it through a barrage of pest attacks intact, it’s usually a little more battered than we like to see. Yep, that’s what happens when we’ve basically all grown up eating non-organic apples. We’ve become used to the shiny flawless apple. But the typical Illinois-grown organic apple is just not going to win any beauty contests. 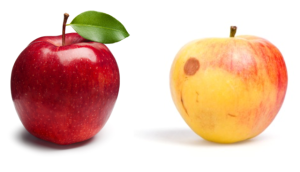 Many of us have grown up eating, and therefore still expect, flawless fruit. But flawless is just not the norm with organic apples grown in Illinois.

In fact, while most of the other display fruits and vegetables Belding grows in the garden are beautiful, it’s very common to hear visitors grumbling about the way the apples look. “We do sell apples…but there’s a lot we don’t sell…because it’s clear someone is living inside.” And even the apples that don’t become permanent insect residences look bruised, discolored, and, well, generally less attractive than many of their pesticide-soaked brethren. There’s a tradeoff, to be sure. Organic and, um, quirky or pretty and non-organic. It’s still something we all have to think twice about at the store: a shiny, lovely apple or a bruised, discolored one. And that translates directly into the farmer’s success.

Translation: it’s a roll of the dice for a grower to move to organic. Will anyone buy once they switch? And will they yield anywhere near the same production levels? If not, that may be a family farm business out the window. Because unlike many other crops, Belding says it’s especially difficult to change your “long term commitment” to apples. So going from conventional to organic really is not as easy as it may sound to the non-horticulturists in the room, ahem, us. It’s a big and complicated decision for Illinois family farmers, who may be living from sale to sale, and/or passing the family business down to their children.

What’s one way to support local, independent farmers while keeping your pesticide intake down? That’s where choice comes into play. “Pears in this part of the country are so easy to grow,” says Belding. “Just look at a pear next to an apple. It’s just as high in fiber, just as sweet.”

At the CBG, they grow about a dozen varieties, which Belding says are “perfectly suited for our climate and produce predictably heavy crops year after year.” If you’re looking for something that’s reminiscent of apples, try the round and crunchy Asian apple variety of pears, or Bosc and Bartlett pears for a satisfying crisp.

And when your heart (or recipe) is set on an apple, head to the farmers market and get to know the growers. Chat with them about how they grown their apples. While they may not be certified organic, you’ll find growers who do work hard to maintain a balanced, healthy environment.

So at the end of the day, did eating that apple keep the doctor away? Maybe, maybe not. But when it comes to what we eat, the health of our planet—and ourselves—is all about becoming more connected with our food sources, staying informed and engaged in the community, and of course, knowing we can make a difference with every dollar we spend, every meal we make, and yes, even every piece of fruit we eat.

“An apple a day keeps the doctor away” depends on the apple. A pear might be a good modern substitution.

• Head to a farmer’s market to meet your local farmers. Explore Chicago has got a handy list of area markets.
• Visit the local apple farms yourself! Here’s a list of U-pick orchards around Chicagoland, courtesy of Orange Pippin.
• Stay tuned to the EcoMyths blog for related posts and ways you can get more involved.