“Hold Your Nose!”—Said No Real-Life Composter We Talked To, Ever

Every nose has its own unique point of view, er, smell—but all are likely to turn themselves up at the smell of rotting trash. Why then would we assault our nasal passages by composting, aka, piling up a bunch of food and plant waste with the express goal of, gasp, purposefully letting it rot?

Answering the why is easy: For one thing, composting turns nutrient-rich food waste back into food for the garden, and, by reducing food waste headed to landfill, takes some heat off the earth’s atmosphere by reducing methane emissions. But before we get into a full-blown love song about composting, it’s time to set the record straight about the stink. 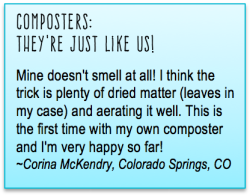 “It only stinks if you’re not doing it right,” says Eliza Fournier, of the Chicago Botanic Garden. “After people read this article, they will do it right. Therefore composting doesn’t smell!”

As the leader of the Garden’s Windy City Harvest Youth Farm program, Fournier would know if compost-related nose plugs were a common request (they’re not). She oversees the Garden’s Youth Farm sites, which provide urban farming jobs to youth in food desert communities, giving them hands-on experience in the gardens—and in the compost piles around them, too.

The Feds back up the case against the need for nose-plugging, too, promising on the EPA website that a properly managed compost bin “will not smell bad.”

Still, because every aforementioned nose is indeed different, we also turned to Facebook for some first-hand accounts. Does your composting stink, we asked you? “No!” Was the resounding answer. (For more of what these real-life, non-professional composters said, check out the IRL stories sprinkled throughout this article.)

It’s Easy to Bench the Stench

Healthy outdoor compost is easy to maintain, explains Fournier. “It’s like making a parfait,” except you’re layering in nitrogen, carbon, air, and water. 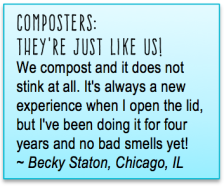 * Note: Quantities are irrelevant in this easy-does-it recipe. Directions:

“It’s almost like having a pet,” muses Fournier. “If your pet is looking lethargic, or panting a lot, he probably needs some water. Oh, he smells a little? Maybe he needs a bath… “With composting, you start to do the same. It looks depleted? Give it some food. It’s a little crunchy? Give it water. Too wet? Hold the water!”

Like plants, pets, anything you care for, it’s natural to want to observe it, and as you do, you’ll be able to diagnose any issues pretty quickly. 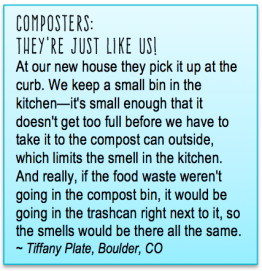 Still, you don’t need to be “super precious” about your compost, she says. “The most important thing is balance. Everything in moderation in terms of greens, browns, soil, water, and air—not too much of any one thing.”

So, let’s say you strike out big time in terms of balance and somehow, against all odds…your compost does stink? Never fear! Fournier says even if stink happens, you can stop it pretty quickly.

“Usually it starts smelling is if it has too many greens or is too wet. The way you deal with that is to add more browns to counter-act greens, stop watering, and get some air circulation in there.” Not enough dried leaves around this time of year? No worries. Add non-glossy paper or cardboard.

As for the inside portion of the affair, just keep scraps in a lidded container and take ’em out every day. Apartment dwellers can try worm bins, aka vermicomposting systems, which are also non-stinky, and in Fournier’s opinion, even easier than composting proper.

Okay, so composting doesn’t stink. But that’s not the only thing it has going in its favor. We can all help reduce food waste, improve our gardens and selves, and even combat climate change, simply by returning our food scraps to the earth in an awesome way. 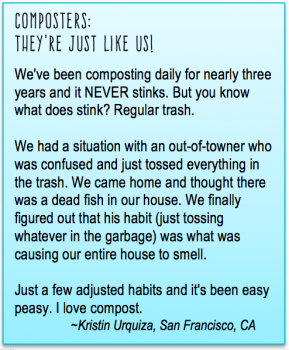 How awesome? Let’s count the ways:

To make sure we covered all our bases in terms of potential stinkage and likely benefits, we also turned to a real-life farmer.

“Your pile won’t stink,” confirms Audra Lewicki of Dirt Doll, an urban farm in Chicago, “as long as you’ve got a good mix of greens and browns, water, and air.

“It’s important for us to compost because we get to put all those nutrients back into the soil and avoid using up precious fossil fuels to haul them to a landfill. It kills me to think of our nutrient-rich turnip tops and dandelion greens sitting under heaps of plastic bags for decades in a landfill.”

Good point, Dirt Doll. We can all take a deep breath and help save the world, one non-smelly, composted food scrap at a time.

Composting doesn’t stink—if you stick to the basics. The only thing that might stink? The trash, when it’s unnecessarily full of all those food scraps that could’ve been composted! 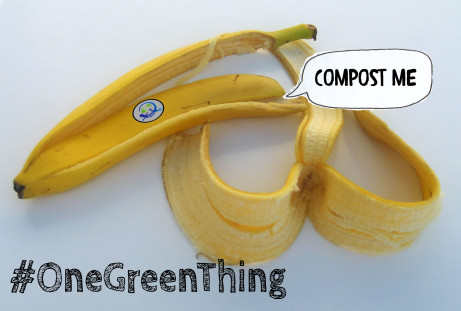 As a first step to composting, measure how much compostable food you throw away during the week. Not only will this will help motivate you to set up your composting system, it will also give you a sense of how big an area or system you need to set up.

How? Use a food storage container (or several, depending) to store non-meat food scraps for a week. Assuming you don’t already have a compost system in place to add these scraps to each day, you’ll want to refrigerate this so it can accumulate without stinking up the kitchen. (Typically you’d want to move scraps to their composting system every day, so they’re not just hanging out on the counter.)

At the end of the week, weigh the storage container. Measure your own Multiplier Effect by multiplying the weight by 365. It adds up!

Need composting starter items? Our composting gurus weighed in with some tips.

When you know more about how big a system you need, you’re ready to advance to the next level: read the quick how-to on setting up a compost pile, courtesy of the Chicago Botanic Garden guide.

The average U.S. citizen generates 4.4 pounds of waste a day, roughly two-thirds of which is compostable, according to Duke University’s Center for Sustainability & Commerce. That means each of us who starts composting now could, in a single year, keep a half a ton of food waste out of landfills.

IRL Multiplier Effect: Thanks to the waste-busting combo of composting and recycling, IRL composter Kristin U. has cut her household of two’s actual garbage output down to a single 10-gallon trash bag per month.