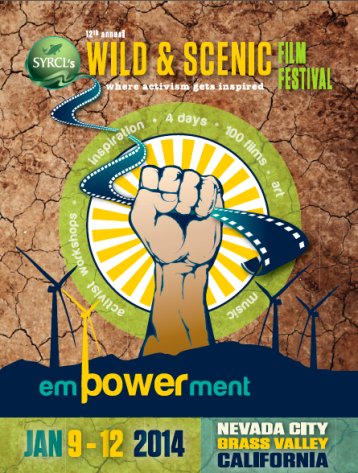 And the winner of best picture in the green film category goes to…wait, what? You haven’t seen any environmental documentaries this year? Now’s your chance. Fresh off a weekend of reveling in eco-inspired cinema at the Wild and Scenic Film Festival in Nevada City, California, I’ve got your fest-fresh picks right here.

First, I’ll just say it: Depending on the subject, eco-flicks can be a buzz-kill (which is kind of inevitable when you’re talking about things like poaching endangered species, destroying pristine wilderness, and getting scary sick from a host of sketchy contaminants…) Still, many of these films provide ample reason to hope for a better tomorrow, if enough people come together to make a change.

The trick in my book is to know what to expect before you go, so you can mentally prepare for a potentially complex range of feelings. As such, I’ve included a handy “mood clue” in each of the following reviews, as well as One Green Thing you can do to help turn the tide.

Without further ado, here’s a brief guide to the genre’s latest and greatest.

Taking home top honors from the film fest, this heavy-hitting sequel investigates the dangers of fracking, aka, hydraulic fracturing to extract natural gas and oil. Arguing that the gas industry’s defense of natural gas as a clean alternative to oil is a myth, the film uses dark humor to voice the very personal concern that if/when fracked wells leak, they will contaminate water and air, ultimately putting both human health and climate at risk. (Missed the first one? Catch it on Netflix.)

A crumbling Colorado mill town has been in an economic tailspin for decades. Now, many residents believe that a proposed uranium mill—the first to be built in the U.S. in 30 years —could change their lives for the wildly better, their desperation for jobs outweighing concern for health and ecological impact. Meanwhile an environmental group from a wealthy neighboring community is fighting to stop the mill, which they argue could harm water quality for millions and add to the already visible toll past uranium mining has taken on public health. The public debate is emotional and heated, and serves as a thought-provoking lens into the human, economic, and environmental impact of mining.

Essentially a love letter to pollinators everywhere, this high-profile documentary (hello, narrator Meryl Streep) will take your breath away. With vibrant, even exuberant footage of butterflies, hummingbirds, bees, and bats, the film celebrates the intriguing creatures responsible for pollinating a third of the world’s food supply—and illustrates the various ways we can help support these threatened creatures.

There’s really nothing fun to say about a collection of trash so colossal that it harms wildlife even though it’s literally thousands of miles away from civilization. In fact, it’s downright disturbing. But, there is real value—not to mention an armchair adventure—in journeying through the masses of plastic that now choke parts of the ocean. A diverse cast of scientists and volunteers who filmmaker Angela Sun meets along the voyage help shed light on this truly modern mess.

With more rooftop farms, porch gardens, and backyard beehives sprouting up every day, growing food has become totally hip—just as it should be. This fast-paced doc traverses the country to share stories of intrepid urban farmers who are challenging the way we grow and distribute food. The result of their collective work is more than just good food—it’s also educating kids about healthy eating, helping urbanites commune with mama earth, and making a positive difference in the environment to boot.

More Than Honey: I’ll admit the main reason I was initially drawn to this film is that its title calls to mind the ’80s alt-rock classic, Just Like Honey. But I’m also a sucker for detailed footage of tiny things, and this Oscar-nominated filmmaker really captures the glory of the small but mighty bee. Check the screening schedule.

Yosemite: A Gathering of Spirit: Is there anything like majestic scenery and a feel-good conservation story to remind you that life is grand? Ken Burns does it again with this stunning adventure through Yosemite in both place and time, honoring the greats who helped protect this important American wilderness.

Inspired? Find out how you can bring Wild and Scenic On Tour to your town. Think I’m missing something? Do tell!