Why North America Is Losing in the Monarch Games


Wanna talk Olympic pursuits? Every fall, monarch butterflies in eastern North America embark on an epic journey. Putting in 50-100 miles a day, they travel up to 3,000 miles from the U.S. and Canada to the fir forests of Mexico’s Neovolcanic Mountains, where they settle in for a few months of subtropical sun before winging it back north in March.

Ground zero for scientific study on this more than 10,000-year-old migration is Mexico’s Monarch Butterfly Biosphere Reserve, a World Heritage site, where an estimated 95 percent of the eastern monarchs spend the winter, making it, as UNESCO puts it, “the most dramatic manifestation of the phenomenon of insect migration.”

This winter, though, monarchs are occupying the smallest area they have since scientists started measuring 20 years ago, according to a new report by the World Wildlife Fund-Mexico.

As of the December 2013 count, monarchs have populated just 1.65 acres of the forest—compared with close to 50 acres in 1995—and are down 43.7 percent from 2012. (For the record, scientists can’t physically count the butterflies, so they use the geographic measurements to estimate population size. At 20 million butterflies per acre, this year’s population is estimated at only 33 million monarchs compared to a peak of 1 billion in 1996, according to Journey North.)

To state it bluntly: “It’s pretty pathetic…I’m not sure what’s going to happen,” says monarch expert Lincoln Brower, PhD, professor at Sweet Briar College in Virginia and professor emeritus at University of Florida. “There has been a statistically significant downtrend, which in the last five years has become fairly precipitous. This past year, it’s not only the total number of [acres] that are way, way down, but also the fact that only one colony had a significant number of butterflies.”

On that not-so-uplifting note, let’s dig in…with some more expert insight from Brower on the whys, the hows, and—most definitely—the now-whats.

First, let’s talk geography. How do we know the mighty monarchs haven’t just settled on another, trendier vacay spot? Brower says that within the Reserve’s 12 mountains, new generations generally form colonies within just a few feet of where their predecessors did in previous years.

In other words, though it is a mystery how they navigate their way to these spots, the destination selection is no passing trend.

So, if monarchs aren’t simply changing course, why aren’t they where they should be now? According to the WWF report, Bower, and supporting studies like this Conservation Biology article, there are three primary threats to eastern monarchs.

Indeed, all three factors pose clear and present danger. But several scientists are saying that one outweighs the others.

“This decline has come on so fast that it really points to a loss of habitat due to GMOs with herbicide resistance,” states Brower. Another reason to point the finger at GMOs is because this decline is also coinciding with a slowdown in deforestation, which should actually be supporting population growth. And while extreme weather no doubt plays a part in population from year to year, he adds, looking at migration trends alongside weather charts (which, FYI, you can do at Journey North) shows that bad weather has not been as consistent a problem as sheer lack of breeding habitat.

The numbers back up this perspective. According to the WWF report and this Insect Conservation and Diversity paper, more than half of the butterflies that overwinter in Mexico have typically come from the Midwest, where milkweed once flourished along the edges or in between rows of even the biggest agricultural fields.

In recent years, however, the growth of milkweed in the Midwestern landscape has nosedived—to the tune of a 58 percent decrease between 1999 and 2010. This coincides with, wait for it, an estimated 81 percent decline in monarch production in the Midwest.

The loss, researchers say, also coincides with the increased use of glyphosate, a non-selective, systemic weed killer that was brought to market by Monsanto as Roundup (though now that Monsanto’s patent has run out, you can find it in many other products as well). Why the increase in glyphosate use, you might ask? Glyphosate-resistant seeds, aka Roundup-Ready seeds, have been wildly popular with U.S. farmers because it enables them to kill all the weeds (including, you guessed it, milkweed)—without killing any of their crops.

In fact, according to the USDA’s Recent Trends in GE Adoption, a whopping 93 percent of planted soybean acres are now herbicide-tolerant, as are 85 percent of cornfields. 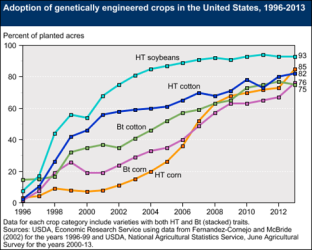 And in another interesting correlation, according to the EPA’s last, um, round-up of most commonly used pesticides in the U.S., glyphosate clocked in at numero uno with 180-185 million pounds being sprayed per year—more than twice the amount used in 2001.

Statistical coincidences? While more research may be needed to determine the full extent of the connection, there is certainly a growing body of evidence that the rise of GMOs is contributing to the decline of monarch populations.

And though the topic is a heated one in the U.S., at least two of the nation’s most respected monarch experts, Brower and Karen Oberhauser, PhD, have gone on record with strongly stated positions, citing the cultivation of genetically modified crops as the “number one culprit” and the “the smoking gun,” respectively.

Still, no matter which threat is of most concern, the combination of reduced breeding habitat, severe weather, and deforestation is certainly making it a tough time for monarchs these days.

Overwhelmed yet? Take heart! The good news is there are a lot of ways you can help these magnificent little insects.

How to Help Monarchs Win

Wanna lend a hand, ahem, wing to monarchs? Here are just a few ways you can go for the gold: 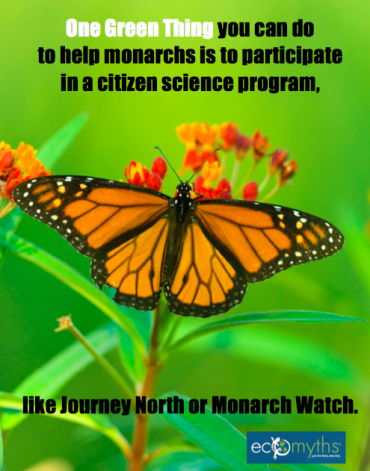 Declining monarch butterfly populations and the rising use of GMOs in agriculture are closely linked. As herbicide-resistant corn and soybean crops take over more of the monarchs’ traditional breeding grounds, they are wiping out the milkweed that monarch larvae depend on for food and shelter.